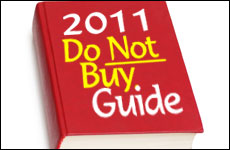 It’s nearly Chanukah time and you know what that means – right, a stomach ache from eight days of potato pancakes. While you’re recovering, you’ll no doubt peruse the recommended Chanukah gifts lists that pop up nearly as often as x’s of Herman Cain. So while you have no shortage of holiday gift ideas, those lists never tell you which gifts you should not purchase. Hence, the public service I perform each year for humanity, or at least for my fellow Jews, or at least for the Jews who read my columns.

Okay, so I’ve narrowed it down to three people who may see this, and one of them is my mother. Still, if I can keep even one person from making a bad Chanukah gift purchase, it will have been worthwhile. And not to brag, but I already have that number tripled – assuming my kids are reading my columns. Here, then, for my three readers, and for anyone else who happens to stumble across this, are:

You’ll most likely want to avoid these…

In addition to featuring alluring images of Søren Kierkegaard, Friedrich Nietzsche, Martin Heidegger, Franz Kafka and Jean-Paul Sartre, the world’s first existentialist loungewear is covered with quotations highlighting a sense of disorientation and confusion in the face of an apparently meaningless and absurd world. Sample Snuggie quote embossed on the garment: “Myth opens the door to a world that cannot be predicted and controlled, where truth is more amorphous, multifaceted, relative, pluralistic.” Optional accessory: matching State of Perpetual Despair Footies.

The dreidel is primarily a simple spinning toy for children. So, why anyone would want to produce and market a dreidel that, when it spins, emits the jokes of old-school comedian Jackie Mason – is anybody’s guess. Sure, funny is funny, but will a six year old appreciate the likes of: “I have enough money to last me the rest of my life, unless I buy something.” Or, “I was so self-conscious, every time football players went into a huddle, I thought they were talking about me.” Or, “My grandfather always said, ‘Don’t watch your money; watch your health.’ So, one day while I was watching my health, someone stole my money. It was my grandfather.” From the makers of the Henny Youngman Jump Rope.

We all have memories of traditional Chanukah gelt – the foil-wrapped chocolate coins given to Jewish children to use when they play dreidel games. Health-oriented parents have long had mixed feelings about the fat and sugar content of the chocolate coins, not to mention the animal products used in their creation. But the gelt issue is one less worry for them now that Veggie Chanukah Gelt has arrived. These goody-goody parents apparently feel no guilt in ruining one of children’s great pleasures of the Jewish holidays. So they now have the option of force-feeding their precious children coin-shaped, foil-wrapped discs of organic, freeze-dried carrot, beet, zucchini, broccoli and turnips. To quote several of the innocent young victims enduring these for the first time: “Yeccccchhh!!!” Quick, someone call Child Protective Services.

The first question that comes to mind here is “Why?” Bernie Madoff now holds the world-record for biggest Ponzi scheme in history. Madoff stole an astonishing $50 billion while chairing the Nasdaq and maintaining cushy relationships at the SEC. He is now serving a 150 year prison sentence to contemplate the lives and charities he literally destroyed. So, why embroider his face onto a pillow? Perhaps a dartboard could be justified, or a miniature gallows or electric chair, but a pillow? Hopefully, these were created while his clients still loved him and before they found out about his betrayal. Because if they were made afterwards, one must seriously question the business sense, let alone sanity, of their creators. What’s next, Idi Amin placemats? Bin Laden screensavers? The only proper thing to do with a Bernie Madoff embroidered pillow: sit on it.

Every time you pass through a door with a mezuzah on it, you touch the mezuzah and then kiss the fingers that touched it, expressing love and respect for God and his commandments. The company Mezuzah Mania had the bright idea to shorten the process by making the mezuzah lips-shaped, thereby saving the step of kissing your fingers. If that’s not creepy enough, the Lips-Shaped Mezuzah with Sound also makes a kissing sound each time you touch it. And if you keep pressing the lips, the mezuzah will play a recording of Leonard Nimoy singing “Shema Yisrael.” Not your cup of borscht? The company also offers one with Barry Manilow reciting the Ten Commandments, and one of Woody Allen and his New Orleans-style Jazz Band doing a lively version of “Hava Nagila.” Mezuzah Mania president Shlomo Feldstein admits that in the last six months, the company has only sold three, and those to family members, but Feldstein remains hopeful that business will pick up this holiday season. “It’s got to. Otherwise, I go back to the family business – appliance repair.”

The Toyota Schlump marks the first time an auto manufacturer has attempted to create a vehicle specifically for Jews. Many Jews and Jewish organizations are already offended by and protesting what they perceive as the vehicle’s stereotypical Jewish features. For example, instead of a car’s typical engine starting sounds, the Schlump makes moaning and whining sounds as it is started. Its GPS tracking device has on-screen indications of the location of any delis, Neil Diamond appearances, or any coins or dollars spotted on the road. An extra, passenger-side steering wheel has been installed for mothers-in-law. The horn plays the “If I Were a Rich Man” part that goes, “Daidle deedle daidle daidle daidle deedle daidle dum.” The seats are covered with plastic sheets so they don’t get dirty. The radio stations feature only klezmer music. And any amount of oil added to the car ends up lasting eight times more than you thought it would.

Again, these are the gifts you’ll no doubt want to avoid giving. This list is my gift to you. You’re welcome. Happy Chanukah.