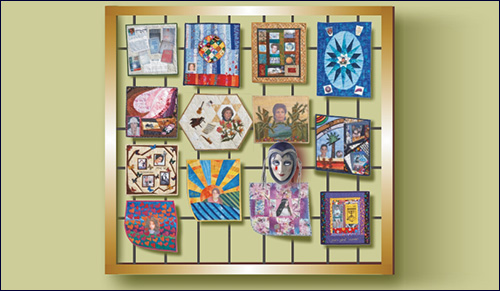 18 years after a series of deadly terror attacks, a unique quilt stitches together broken hearts.

In the nine days leading up to Purim in March 1996 60 people died in five acts of terrorism throughout Israel. Fearing more terrorist attacks, people canceled many Purim parties and children stayed home. As a result, many young Israelis remember 1996 as the year without Purim.

At 3:56 p.m. on the eve of Purim, a suicide bomber detonated a twenty-kilogram (44 lb.) bomb laced with nails and screws at the intersection of Dizengoff and King George Streets, outside the Dizengoff Center shopping mall in downtown Tel Aviv. Five children in costumes were among the 13 victims, who included a young soldier, two friends out for coffee, a journalist on his way to work, an elderly woman due to meet her son at an Israel philharmonic concert, a woman on her way home from shopping, and a mother and daughter shopping for a wedding dress. 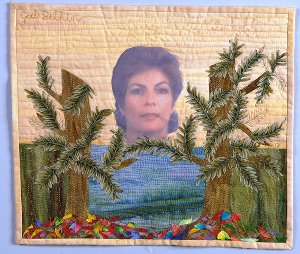 Seventy-three-year-old Sylvia Bernstein and her 48-year-old daughter Gail Belkin were out with Gail’s daughter Lauren for her wedding-dress fitting – she was to be married two weeks later. In what should have been the happiest week of her life, Lauren suffered the horrific loss of her mother and grandmother. Sylvia, a widow, was survived by three other children: her son Paul and daughter Marlyn Butchins in Israel, and her son Darryl, now in Australia. Gail was survived by her American husband Larry Belkin – to whom she had been married for a year, her two daughters, and two stepchildren.

I don’t like the word closure, because there is no closure really. It’s something that you think about all the time.

Marlyn and her sister Gail were best friends and exceptionally close. For nine years Marlyn struggled to find a way to contain her grief. “For me it doesn’t have to be closure. I heal – I don’t like the word closure, because there is no closure really. It’s something that you think about all the time. I eventually came to the acknowledgment and understanding that life does go on. Despite the pain and the hardship of the loss, I realized we must continue to move forward, otherwise we hand a victory to those who would seek to destroy us.” 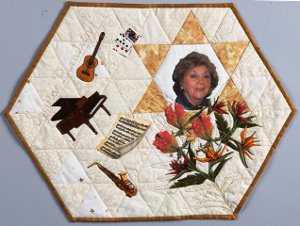 Every year Marlyn and Paul and their families would attend the commemoration service held on the corner of Dizengoff and King George Streets in the heart of Tel Aviv. There would be speeches by the mayor and by family members of the victims, Yizkor (the Jewish memorial prayer), “many, many tears, the names on the stark stone memorial touched with loving fingers…and we have gone home to mourn once again.” After a number of years of standing alongside the other family members at the annual service, Marlyn began to feel bothered that she didn’t know the other families or anything about the loved ones they were mourning. This was a tragedy that had permanently affected so many families, and Marlyn only had her own individual piece of the story.

Perhaps this was what led her to the idea of creating a quilt that would join all the pieces of the tragedy together into a unifying whole. Marlyn embarked on a personal mission to create the Dizengoff Memorial Quilt to bring the stories of the victims of Dizengoff, Purim 1996, to life. She did so with the help of volunteers from the Accent Quilters Guild of Herzliya. 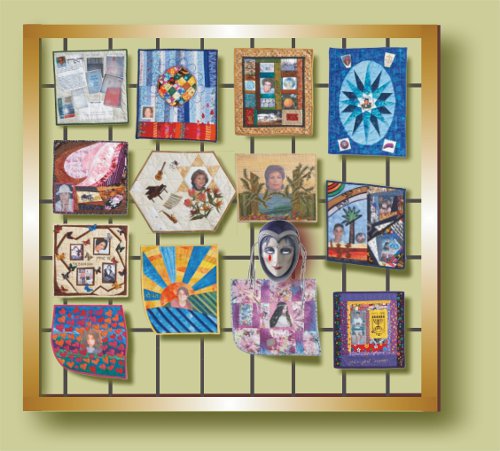 Conceptually, she decided to create 13 individual small quilts – one for each victim. Each quilt would tell the personal story of the victim’s life, achievements, hopes, and ambitions. “Each of these people had their own stories; they each left their own personal legacy, known mainly to their families and friends. I felt that the thirteen victims – out of the thousands who have perished at the hand of terrorism in Israel and abroad – could become powerful symbols and guiding lights as to how we can honor and cherish the memories of our loved ones.” Finally, as a poignant symbol of the holiday, Marlyn included a piece created by Paul’s wife Sharon – a Purim mask with tears of blood staining its cheek.

In order to create each piece of fabric art, Marlyn met with the families of each of the victims of the bombing. The family members came alive during these meetings as they started remembering things about their loved ones and brought out photographs and things they had made and were interested in. As Marlyn conducted the interviews and developed the quilt, “everything started coming right for me. And I honestly and truly felt a healing. It was such an incredible feeling.”

The quilt is a celebration of life and not a memorial. “The memorial ceremony at the Dizengoff Center in 2005, the first time that the quilt was presented in public, took on an entirely different nature,” Marlyn shares. “Whereas before it had been a somber, painful ritual, the atmosphere changed to one of excitement and animated discussion” as the families recognized the symbols chosen to represent their loved ones. “This project has taught me how families coped with this tragedy and it has taught me that loving-kindness and good deeds are more powerful than hatred.”

I will stop the sadness and replace it with joy.

For Marlyn this was a personal achievement as well as a journey of healing. “I felt an amazing uplifting of my spirit. I was actually taking control of the tragedy and saying, ‘No, you will not control my life any longer; I choose to celebrate the lives of my loved ones and the lives of all those who were lost; I will stop the sadness and replace it with joy – joy in that I was privileged to know those who were close to me, that I learned so much from them, that I loved them and they loved me.’ I have been enriched and empowered, and I felt an indescribable lightness, a relief, as if an enormous weight had been lifted from my soul and I was free to remember my mother and sister in the best of ways. I was inspired by the strength of the people I met, by their indomitable spirit and most of all, by the lack of bitterness, the absence of hatred, and the determination to move forward.”

Marlyn is also comforted by the fact that anyone who sees her quilt “will never ever think of Dizengoff as a statistic. They will never forget what happened at the Dizengoff Center on erev Purim 1996; the quilt will tell the world about the victims and let everyone know that our lives were enhanced by their presence – however brief – among us.”

Eleven years after the attack, the municipality of Tel Aviv stopped holding an official Dizengoff ceremony. Eighteen years later, the stark stone memorial still stands at the site, reminding passersby of the tragedy and the names of the 13 victims of terror. Marlyn’s beautiful quilt continues to celebrate and honor the lives, loves, and dreams of these victims – real people, not just statistics. As a living, vibrant work of fabric art, the quilt also speaks out for other victims of terror in Israel and around the world.

Zieva Dauber Konvisser, PhD, is a Fellow of the Institute for Social Innovation at Fielding Graduate University. Her research focuses on the human impact of traumatic events, such as terrorism, genocide, war, and wrongful conviction. She served on the National Commission on American Jewish Women and is currently on the international board of the Israel Center for the Treatment of Psychotrauma. Her book Living Beyond Terrorism: Israeli Stories of Hope and Healing is an inspiring look at how 48 survivors of terrorism move forward from terrorism to hope and optimism and from grief to meaning and healing. The book can be ordered here: https://www.gefenpublishing.com/product.asp?productid=1110. Visit Zieva Konvisser’s website at www.zievakonvisser.com.

It Hurts to Part from You
Dr. Sheila Nazarian’s Escape from Iran
The Miami Boys Choir is Taking over TikTok
Caramelized Onion and Pumpkin Pirozhki
Comments
MOST POPULAR IN Israel
Our privacy policy
Aish.com Is Looking for Great Writers