The Year the Maccabees Were Banned From the Temple 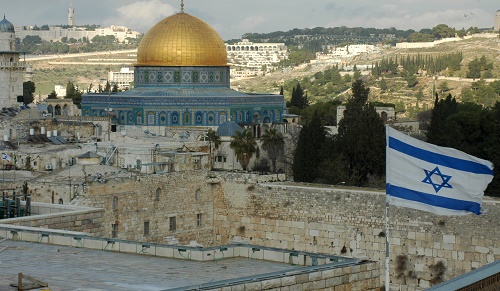 Mount Moriah, the Western Wall and the Jewish Quarter have been deemed off-limits to Israelis by last week’s UN edict.

For Jews around the world, this was the year Hanukkah did not live up to its traditional role as a happy holiday. Merging with the memory of a miracle of old was the contemporary reality of a bitter betrayal of the historic long-standing American friendship with Israel – and ironically enough centered on the very same theme which for more than two millennia gave Hanukkah its spiritual meaning.

For those who know the story, the little cruise of oil capable of burning for only one day which miraculously remained lit for eight was an illustration of the divine intervention which made the victory of the Maccabees possible. Jews didn't just celebrate for 2000 years the power of a small jug of oil to last longer than natural law would consider conceivable. The oil was a symbol of Jewish survival. The oil was key to our rededication of the temple – Hanukkah means dedication – and our ability to once again rekindle the menorah, so that it might illuminate the spiritual darkness of a world devoid of God’s presence.

This happened in what is today known as East Jerusalem. It was on the very spot where Abraham, the first Jew, was prepared to sacrifice his son in accord with God’s will, only to be taught that unlike pagan practices of the time human sacrifice was an abomination to the Almighty. It was the spot as well where Jacob dreamt his dream of the ladder rooted on earth with its head in the heavens, an iconic image of the partnership between God and humankind. There too is where King Solomon – yes, the Jewish King Solomon – built the first temple and where after its destruction the Jews returned to rebuild a second temple on the site they continued to view as the most sacred spot on earth.

That is the reason the Maccabees fought against impossible odds. That is the reason their victory assumed such significance in Jewish tradition. Theirs was a spiritual battle for the right to worship in the place which was linked to their ancestors for generations past.

But Mount Moriah, the focus of universal Jewish prayers, along with the Western Wall and the Jewish Quarter, have been deemed off-limits to Israelis by last week’s edict of the United Nations, accessible only to its Palestinian “original owners” who never existed in biblical times and to followers of Mohammed who was not born until the seventh century of the common era.

It is more than ironic that the Hanukkah story reminds us of a claim comparable to the shameful decision of the Security Council. Antiochus VII, ruler of the Hellenistic Seleucid Empire, demanded that Simon, who led the Maccabees in their struggle for religious freedom, return to him the "illegally occupied" cities of Jaffa, Gezer and the coastal towns, which had previously been controlled by the Syrian-Greeks. Simon defiantly responded (Maccabees 1 Chapter 15): "We have not taken strange lands, nor are we ruling over foreign territory. We have returned to our ancestral inheritance, from which we had been unjustly expelled by our enemies. And now that we have been blessed with the opportunity, we will hold onto our ancestral land."

Today we desperately need another miracle, a miracle of global enlightenment overpowering the age-old darkness of the world's hatred of the Jewish people.