The World Stands with France. What about Israel? 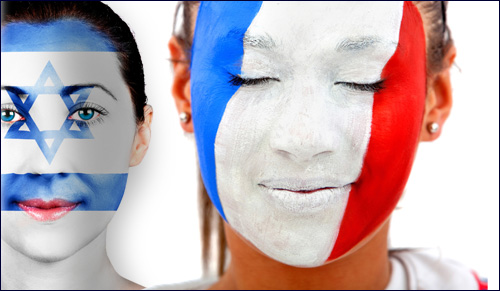 Is it too much to ask the world to declare that when Jews are murdered it is as much of an outrage as when terror strikes in Paris?

The tricolore red, white and blue of the French flag hung in the gym of the Chicago school, along with a sign declaring the school “Stands with France”.

The occasion was a basketball game. Girls from my daughter’s Jewish middle school team were squaring off against girls from a French school. When they arrived at the court, my daughter and her teammates handed the French coach a letter, expressing their sorrow at the horrific terrorist attacks in Paris the week before, and professing solidarity with their French peers.

Taking the letter, the French coach postponed the game, first addressing the students directly. Despite belonging to different cultures, he intoned, all of the players were united in grief. This Jewish school has always been a staunch friend, and he warmly thanked my daughter and her teammates for their support.

I was proud of my daughter, gratified that she and her teammates had thought of their rivals’ feelings and grateful to their Jewish school for teaching that we always have a responsibility to reach out and help others. But mingled with my pride that night was exhaustion.

The heartache had kept coming in waves all day. First, news broke that there had been another terrorist stabbing in Tel Aviv on Thursday, November 19, 2015. Then the news that two men were now dead, stabbed in broad daylight on a busy street full of passers-by. Men were gathered inside a Judaica shop to recite the afternoon service when the attacker struck. People inside managed to barricade the shop door, but three men outside were stabbed. Aharon Yesayev, 32 and Reuven Aviram, 51 were killed.

Then another terror attack rocked Israel. An Arab terrorist opened fire with a submachine gun on cars stopped in traffic and then crashed his car into another. Three people were killed and many people were injured. Rabbi Yaakov Don, a 51 year old father of four and beloved teacher was one of the fatalities. “He was my children’s teacher!” a friend posted on Facebook, describing him as a gifted educator and gentle soul. Also killed was Shadi Arafa, 24, an Arab employee of a Palestinian cellphone company.

The fifth fatality of the day was 18-year-old Ezra Schwartz, a student from Sharon, Massachusetts. Like many Jewish American teens, he was spending his post-high school year in Israel studying and volunteering. The day of his murder, he’d been distributing food and candy to soldiers near Jerusalem. “I write through tears,” a friend of mine who knew Ezra wrote. Another recalled getting together with his parents – she could only imagine their heartbreak. When my son came home from school, he looked shaken. Several of his classmates knew the Schwartz family. “He could be my son!” cried a friend of mine, and I knew what she meant. Ezra could have been any of our teens, full of idealism, eager to visit the Jewish state, brimming with plans for the future.

And I wondered if the students at the French school my daughter played against that night would reach out to her and her heart-sick teammates and their families too. While the world rightly rallied around France in their hour of need, where is the call outside of the Jewish community to do the same when Jews and others are murdered in Israel?

Cities around the world don’t light up their national monuments in the blue and white of Israel’s flag after terror attacks in the Jewish state, as they beautifully did after the Paris attacks. Facebook doesn’t offer users the chance to change their profile picture to the colors of Israel’s flag, as they optioned after the mayhem in Paris.

Is it too much to ask the world to declare that when Jews are murdered it is every bit as much of an outrage as when terror strikes in Paris?

I was gratified when I saw photos of Israel’s Knesset and the walls of Jerusalem’s Old City lit up in the French tricolore. I was happy when my daughter and her friends announced they proudly stood with France. Will the world also stand with us in our grief, in our pain as we bury and mourn our best and our brightest?

Please do not let us stand alone.

The Heart-Rending Cry
Grilled Israeli Lamb and Veggie Kabobs Recipe
Pain is a Reality; Suffering is a Choice
The Promise Of The Land
Comments
MOST POPULAR IN Jewish Society
Our privacy policy