The Wedding Plan with No Groom 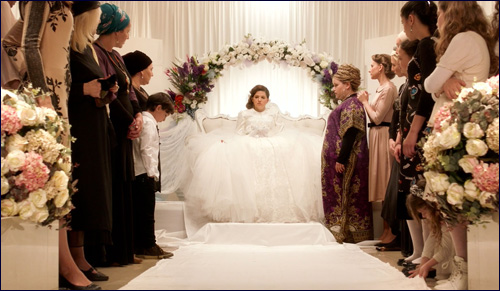 A new Israeli movie explores the limits of faith.

Watching the new Israeli romantic comedy, The Wedding Plan, about a woman who carries on planning her wedding even after a broken engagement, I was in suspense till nearly the very last frame of the film. Award-winning writer-director Rama Burshtein’s second feature delivers a happy ending, but not without a hefty dose of sophisticated suspense.

Like Burshein’s first movie, the award-winning Fill the Void, The Wedding Plan shines a sensitive and perceptive light on the world of Orthodox dating-and-mating rituals. Whereas Fill the Void was a drama centered on the dilemma of a young woman pressed to marry her much-older brother-in-law after her sister’s tragic death, The Wedding Plan is an outright comedy, though one suffused with poignant moments and universal truths.

The protagonist is Michal (Noa Koler), a 32-year-old baalaas teshuva (returnee to Jewish observance) exhausted from more than a decade of fruitless dating. When the story begins, she is nearing desperation to marry and earn the social elevation, security and love that she expects marriage to bring. Soon enough Michal is engaged but she knows something is wrong. Her fiancé is just going through the motions, distant and aloof. Despite her yearning to marry, Michal doesn’t look the other way and presses him for an explanation. “I don’t love you,” he admits.

Their wedding date was set for the last night of Chanukah – a nail-biting 30 days away – yet Michal still puts down a deposit on the hall, goes to fittings for her wedding dress, and designs invitations – writing “mystery groom” on the right side of the card. In between wedding-related appointments she takes calls from matchmakers and dates any feasible – and some not so feasible – suitors. Her mother, sister and best friend are in disbelief. Is Michal going crazy?

But Michal simply explains that God will provide a groom in time. “He can do anything. He wouldn’t be so cruel” as to deny her a husband on the wedding day meant to be hers, she says.

Michal’s rabbi warns her not to rely on miracles.

She faces pushback, even from corners where faith is assumed to be rock solid. Michal’s rabbi warns her not to rely on miracles. Her Orthodox tailor admonishes her not to think she’s so special that God will fulfill her dreams, when other prayers and dreams go unanswered. But Chanukah is a holiday of miracles, and Michal spares no effort to make her dream come true. She even flies to Uman, Ukraine, to pray for a husband at the grave of Rabbi Nachman of Breslov. In one of the film’s most poignant scenes, while in Uman Michal admits through her tearful prayers that she doesn’t feel close to God. Her faith is a real faith, tested by underlying questions.

Beyond the idea of marriage as central to traditional Jewish life, the film explores the limits of faith in God. And while the character of Michal is Orthodox, Burshtein explains, “Anyone can relate to [her] dilemma. The fact that she is religious is only set dressing. Do you believe in good? Do you believe that everything is possible?... These are journeys we all take and I think this is why people all over the world have enjoyed this film.”

Burshtein, American-born and educated, became observant while in film school in New York. This secular background helps her portray people – even those often labeled “ultra-Orthodox” – without stereotyping.

Michal is relatable because she has both courage and insecurities; she has faith, but tinged with occasional qualms: Will the Almighty meet her halfway in her efforts to marry and build a Jewish home? On her appointed wedding day, Michal is escorted to her big, white bedecken chair, still waiting for the elusive groom. Her guests look at her with amazement and pity. Michal is dizzy from anxiety as well as from her wedding day fast. The minutes tick away agonizingly, and the Almighty has not yet delivered His miracle.

As I watched the film, I thought about the acts of faith we demonstrate in life each day, some of them seemingly “riskier” than others. I know a community leader who is about to make an offer on a property to buy for his organization, which is about to lose its lease. He doesn’t have the down payment yet but he has faith that the funds will arrive in time. Is this a responsible action informed by his genuine faith or a reckless act compelled by a misguided, irrational faith in God?

I thought about how much time I have spent working on my next book, a memoir about my journey to Jewish observance. It was the hardest thing I ever had to write, took years longer than I thought, and it remains a speculative project: will it find a readership? Will it help me touch other lives? The community leader and I cannot know the outcome of our efforts but we are banking that our hard work for the right reasons will see us through. We are striking the balance of acting responsibly while maintaining our faith.

Was Michal reckless or responsible? You’ll have to see the movie to decide.

Hunger Games: Catching Fire
Why Are The Prayers Of Yom Kipur So Repetetive?
Ha'azinu 5783: A Time for Unity!
Twisted Thinking
Comments