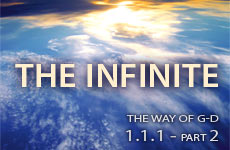 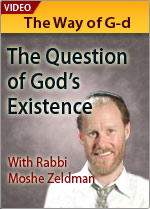 Every Jew must believe and know that there is a first existence, primal and eternal, which brought all things into existence and continues to sustain them. This is G-d.

Let us continue our exploration of the Ramchal's opening line of The Way of G-d. The Ramchal uses three different adjectives that all revolve around the concept of infinite. So let's define: What does "infinite" actually mean?

Literally, infinite means: not finite. When we describe something as being infinite, we're saying that it has no limitations, no "edges."

Infinite also implies that it has no specific properties, because if it were hot, red or funny, that specific characteristic would serve as a limitation. If something is red, it is not blue, nor green, nor white.

Even though in daily discourse we express ideas like, "He's infinitely rich" or "I've been waiting for this phone call forever," these are just popular idioms. Can a person's net assets be infinite? Impossible. We might mean that a person is so wealthy that it's difficult to imagine the vastness of his wealth, but the bottom line is a certain sum of money. If this person's investment portfolio would double over the next year, he'll be more wealthy, which means he could not have been infinitely wealthy. Something big can always potentially get bigger. Something infinite cannot get bigger. If it could, it must not have been infinitely big to begin with.

We face the same issue with the phrase "forever." Forever describes a time that will never come. There's no such moment as forever.1

There are three adjectives being used to describe this infinite G-d:

By calling G-d "first" ("matzui rishon" in Hebrew) the Ramchal is essentially saying that something must exist that caused the existence of everything else. No matter how far back we go in the history of the universe, we're faced with the question, "What came before that?"

The evolutionist feels secure in the theory that we descended from earlier hominids, which evolved from earlier life forms, which came from a primordial soup, which came from inorganic matter that spontaneously formed into reproducible life, which came from energy. But the question still remains: What came before that? As long as the response is some other finite cause, we can probe further back until we arrive at the first cause.2 (Where did G-d come from? That will be answered in a future essay.)

Calling the infinite existence "first" is not as significant as calling it "primal" (Kadmon in Hebrew). Primal is the backdrop in front of which everything else can come into existence. It points to the notion that G-d cannot not be. This will be further explored in a future essay.

Calling the infinite existence "eternal" (Nitzchi in Hebrew) refers to G-d's future existence. Because G-d was never brought into being, there is nothing that can bring G-d out of being. A table has the possibility of going out of existence by the same or similar agency that brought it into being. Similarly, as the moon came into being due to a combination of forces of nature, those forces could also lead to the destruction of the moon.

"...and continues to sustain them"

Here the Ramchal is going beyond the idea of G-d as Creator, to describe G-d as Sustainer. The distinction has huge implications. When relating to G-d as Creator, we are seeing G-d in a historical role of having, once upon a time, created the world. This offers no implication that G-d still has active involvement in His creation.

It's not altogether different than believing that someone created the chair you're now sitting on. Does the creator of the chair have any ongoing involvement with it? If he passed away tomorrow, will something happen to the chair? We would say that the chair needed the maker, in a manner of speaking, in order to come into existence. But once the chair exists, it no longer needs the involvement of its maker.

If we related to G-d only as Creator, we would have the same view. We would view G-d as having, once upon a time, created a world and set it into motion. He "programmed" it with laws of nature and now it runs on its own, like computer software.

The implications are huge. For example, how do we understand natural disasters? According to the "G-d as Creator-only" theology, G-d may have been there at the beginning of time to set up the initial conditions of the universe, but after that He "stepped back" (or lost interest, or died) and no longer has any involvement in His creation.

The Ramchal is saying two important things: 1) G-d is now actively sustaining the entire creation, and 2) one must believe and know that this is so. Like in class #2, the Ramchal is proposing that I can have knowledge – not a leap of faith – that G-d not only exists, but that He is sustaining every aspect of reality at every moment.

This idea presents many difficulties. While a person may be able to accept the existence of a being that created a world many eons ago, it's harder to accept a being that's continuously involved in a moment-to-moment basis. Especially when we look at the evil and injustice in the world, it may be difficult – logically and emotionally – to believe in a deity who allows for tsunamis to drown hundreds of thousands of people. It's all the more difficult to believe in a being that actively and directly controls the waters that drown those men, women and children.

These are the kinds of questions that the Ramchal anticipates as being on our minds, and in due course he will present the Torah's answers to them. But to build a strong foundation toward clarity on these issues, we still have more work to do in appreciating the nature of an infinite being. The Ramchal will use the rest of Chapter 1 to elaborate and clarify. Stay tuned.

Even though we said above that finite things cannot be infinite, the one finite area that seems to allow for the concept of infinite is in mathematics, especially the theoretical end of mathematics.

For example, we talk about a function on a graph that "approaches infinity." Or the fact that two parallel lines will "infinitely" never intersect. Or that the decimal expansion of the number pi is infinite (3.1415927...). Mathematics also says that the set of real numbers R={0,1,2,3,...}, is also an infinite set that goes on "forever." There's no "last" or "biggest" number.

We have to keep in mind that the reason the concept of infinity works here is precisely because it is nothing more than that – a concept. When we talk about the set of real numbers, we're not describing an actual thing that exists in our physical world. We're describing a theoretical notion. There is nothing in the real world of finite objects that is actually infinite. It's logically impossible.

In fact, the whole notion of theoretical infinite has its own internal paradoxes. How many numbers are there? An infinite number, right? Then how many even numbers exist? Half as many? But still an infinite number? Hmmm.

These are the kinds of paradoxes and self-contradictions that one runs into when trying to take a concept like "infinite" and use it within the realm of the finite, like real numbers and even numbers. There are many concepts that work well within their own realm of application, but it would be wrong to extend these theoretical notions into the domain of the real physical world in which we live. In our discussion, we want to probe the existence of the actual, real "infinite source to finite existence."

The Way of God
previous
Article #3 of 29
next
Like What You Read?  Give Jews around the world the chance to experience engaging Jewish wisdom with more articles and videos on Aish. It would make your mother so proud and as a nonprofit organization it's your support that keeps us going. Thanks a ton!

2. The Way of G-d: Belief and Knowledge

18. The Garden of Pleasure

26. The Illusion of Imperfection

29. Environmental Ethics
For Every Individual, A Torah Scroll
Allegiance To The Monarch
Meet the Real You: Yom Kippur
Comments
MOST POPULAR IN Philosophy
Our privacy policy
Aish.com Is Looking for Great Writers