1. The Way of G-d: Introduction 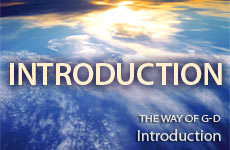 Read each word carefully... and all its secrets will be within your grasp.

Welcome to our exploration of the classic work of Jewish philosophy, The Way of G-d, or Derech Hashem in Hebrew. Written in the early 18th century by Rabbi Moshe Chaim Luzzatto (known famously by the acronym Ramchal), The Way of G-d is a highly systemized look at the basics of Jewish thought, including

This course will follow The Way of G-d in order, giving background and in-depth explanation where needed. Students are asked to purchase a copy of the book, The Way of G-d, translated by Rabbi Aryeh Kaplan, and published by Feldheim. The book is available at Jewish bookstores, or online at Amazon.com and Feldheim.com.

Who was the Ramchal?

Any classic work of literature can only be properly understood in the context of the culture and times that it stems from. Ramchal's The Way of G-d is no exception.

Ramchal was born in Padua, Italy in 1707 to a traditional Jewish family. He was already recognized at a young age for his exceptional memory and brilliance. His parents arranged for him to be tutored in the deeper mystical aspects of Torah by Rabbi Moshe Zacuto, one of the leading kabbalists of the time. Already when the Ramchal was in his twenties, he had his own following of students who were enthralled by his mastery of Bible (Tanach), Talmud and Kabbalah.

At the same time, European Jewry was going through a difficult period. About 100 years prior, another popular Jewish figure had emerged who had wreaked havoc across the Jewish world. His name: Shabbatai Tzvi. Recognized as a young brilliant mystic, he led a mass of followers to believe that he was the messiah. By playing on the difficult conditions that most Jews were living in and the constant anti-Semitism, he convinced large numbers of Jews that the final redemption was imminent. As he made his way toward Israel, he was stopped by the authorities in Turkey who imprisoned him. Under threats of death from the sultan, Shabbatai Tzvi converted to Islam. His most ardent followers converted as well, claiming that it was all part of the process of redemption. For the majority of European Jewry, hopeful for some salvation, it was a devastating blow.

Fast-forward one century: A young and charismatic Ramchal, while becoming popular among the Jews of Italy and elsewhere, was raising suspicions among the local rabbis, fearful of another false messiah. There, he had formed a select small group of students who had to commit themselves to reviewing the entire Tanach and all six orders of Mishnah every month. And in addition, they had a pact among themselves that between them Torah would be studied 24 hours a day, every day, to fulfill the rabbinic dictum that "the world stands on the merit of Torah learning." But the Ramchal's main innovation was that the learning program would prepare them, mentally and spiritually, to learn Kabbalah. The Ramchal writes that the essence of Torah is to be found in Kabbalah, and that all other learning is a preparation toward that goal.

It was this emphasis on Kabbalah, combined with the Ramchal's growing popularity, which led the rabbinical authorities of his time to pronounce a decree allowing the Ramchal to teach Kabbalah only under two conditions: that it had to be in the land of Israel, and that he must be 40 years old.

The Ramchal produced a tremendous literature over the course of his short life. He wrote plays on themes of ethics and morality in Italian, works of poetry, philosophical works like Derech Hashem, and perhaps his most famous book, Mesilat Yesharim, the Path of the Just. Mesilat Yesharim provides a practical Torah framework for personal spiritual growth, and became the guidebook for the Mussar movement in Judaism 80 years later. The majority of his books deal with deep philosophical and Kabbalistic concepts that are fully accessible only to today's biggest scholars.

So let's get started by examining the Ramchal's introduction to the book. Through this we can gain an understanding of his aim in writing it. He starts by saying:

When one knows a number of things, and understands how they are categorized and systematically interrelated, then he has a great advantage over one who has the same knowledge without such distinction. It is very much like the difference between looking at a well-arranged garden, planted in rows and patterns, versus seeing a wild thicket or forest growing in confusion.

We have to keep in mind that the Ramchal was writing to observant, generally well-educated Jews. He felt a need not to explain basic Jewish concepts, but to organize them. His view, which may be just as valid today, was that people were learning Torah piecemeal, without any clear overview of the fundamentals. And that disorganization makes it difficult to understand the bigger picture of the Torah's view of life. As the Ramchal says: "Without this, one's longing for truth will be frustrated and he will be pained by his unsatisfied desire." It's like taking a class in human anatomy where the teacher just randomly chooses every day to talk about a different limb or organ of the body, without ever explaining that there's a skeletal system, a cardio-vascular system, etc. It would be hard to remember any of it, much less see the big picture!

Ironically, even though the Ramchal is writing to a generally educated audience, his book is a perfect introduction to the Jewish fundamentals even for a total beginner to Judaism. Why is that? Because in order to provide maximum clarity, the Ramchal goes out of his way to define and clarify every point he makes along the way. Toward the end of the introduction, he says:

This book should thus provide the basis from which general theological concepts found in the Torah and its commentaries should be readily discerned. All its secrets will then be within your grasp...

No wonder that this book has been plumbed by the greatest scholars, and at the same time been the ultimate introduction to Judaism for the novice!

The Ramchal ends with one exhortation:

I have worked to arrange these concepts in the order that seemed most suitable and in language considered most appropriate to provide a complete picture of what I deemed necessary. You should therefore go through this work carefully, diligently remembering each fact until you find use for it.

Do not overlook any detail, for you may be neglecting a vital concept. Read each word carefully, try to grasp the essence of each idea, and remember each thing accurately. You will then attain the greatest benefit and gratification from this book.

After teaching The Way of G-d numerous times, I know the Ramchal is not exaggerating when he says to "not overlook any detail." We will see that the Ramchal is giving us a beautiful edifice of Jewish thought – one that will give us clarity on issues like the purpose of life, the nature of G-d's existence, free will, the afterlife, suffering, the role of angels, and the spiritual mechanics of doing a mitzvah. But more than that, the Ramchal will present it in a structure where all of the pieces fit beautifully together.

We will also see that when these ideas are put into their proper context, they become applicable to life. One of the most fundamental concepts the Ramchal talks about in his works is the concept of applying Torah – that ultimately we should see the ideas of Torah as insights into life, and as an aid to where we fit into the bigger picture of creation. So as we go through The Way of G-d, we're going to look out for those insights that we can "bring down" into improving our daily lives, and our relationships – with others, with G-d and with ourselves.

The next lesson will begin chapter one of The Way of G-d, on the topic of understanding the nature of G-d's infinite existence. As this is a deep and somewhat abstract topic, our exploration of this chapter will be longer and more complex than subsequent chapters.

Structure of The Way of G-d

The Way of G-d is divided into four major sections:

Each of these sections is divided into chapters.

And each chapter is subdivided into various "points."

And finally, in our exploration of The Way of G-d, we might spend 2, 3, or even 4 classes discussing one individual "point."

Sound confusing? Actually, it's highly systematic. Thus, at the top of each class in this course (except for this introductory essay), you'll find a number that looks like this:

This numbering system will carry on throughout the course, and will help us to keep track of our progress. It will also give an easy cross-reference to the book version of The Way of G-d (translated by Rabbi Aryeh Kaplan, published by Feldheim) that you should have available.

About the Name of G-d: Any Hebrew name of G-d is forbidden to erase (see Deut. 12:3-4) The English word "G-d" is actually a matter of dispute as to its degree of holiness. The common rabbinic opinion is that "G-d" written in any language, other than Hebrew, has no holiness and can be erased (Shach - Yoreh De'ah 179:11; Mishnah Berurah 85:10) On the other hand, in order to treat the name "G-d" with reverence, many people spell it with a dash. In this course, we will follow that custom.

18. The Garden of Pleasure

29. Environmental Ethics
How I Learned to Love the Multiverse
10 Big Jewish Inventions
A Journey through Jewish Sicily
Comments