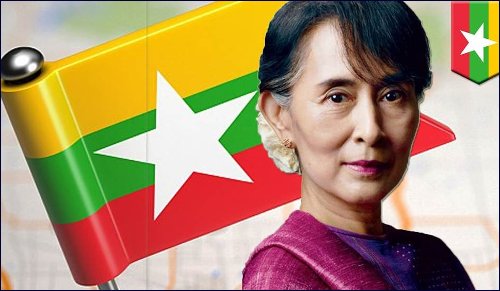 When moral heroes betray the very ideals for which they were singled out for tribute.

What should we do about people we honor with our most prestigious awards – only to find them subsequently betraying the very same ideals for which they were singled out for tribute?

The Memorial to the Holocaust has had only two recipients of its highly esteemed human rights award. The first was Elie Wiesel, a Holocaust survivor and recipient of the Nobel Peace Prize, who served as chairman of The President’s Commission on the Holocaust and is universally recognized through his books, lectures and outspoken calls to never forget the horrors of the 20th century, as “the voice of the six million who perished.”

The only other awardee was Aung San Suu Kyi. The award is given, according to the museum, “to an internationally prominent individual whose actions have advanced the museum’s vision of a world where people confront hatred, prevent genocide and promote human dignity.” And that is who the committee considered Aung San Suu Kyi to be when she was selected in 2012 for this honor.

Alas, time has proven this as a grievous error of judgment. If in fact Aung San Suu Kyi once represented a model of moral heroism, today she is a fallen angel, a willing and vocal apologist for the Myanmar military campaign of ethnic violence akin to the Nazi policy of genocide. Many thousands have been brutally killed by the military and the Buddhist majority, and over 700,000 have been forced to flee their homes. Today they are now packed into refugee camps in Bangladesh. From Aung San Suu Kyi there is only silence – and anger in response to those who plead with her to take a stand against the cruelties to which she is witness.

Fallen angels need to suffer the disgrace of their betrayal.

There are those who argue that the sins of the present should not have any bearing on the homages of the past. Thankfully that is not what the Holocaust Museum decided last week as it revoked an honor whose continued existence would encourage history to esteem someone who, in the words of the committee today, “encourages the tormentor” and is herself a major part of the problem rather than the solution.

Fallen angels need to suffer the disgrace of their betrayal; their legacy must include a condemnation of their crimes against humanity and their active cooperation with evil.

In the United Kingdom there is a lengthy list of those whose knighthood was revoked for their later misdeeds.

Just imagine if Zimbabwean President Robert Mugabe, Benito Mussolini, Nicolae Ceaucescu and their like were not only still deserving of the sobriquet Sir but also entitled to long ago given awards praising their character, their achievements and their “contributions to mankind.”

Jewish history has its own versions of fallen angels. The one who comes readily to mind in a spiritual category is a rabbi of the Talmudic era whose brilliance was beyond dispute. His name – at least originally – was Rabbi Elisha ben Abuha. Tortured by the problem of theodicy, why bad things happen to good people even as they fulfill the very mitzvot for which the Torah promises length of days, the rabbi became a heretic. He publicly flaunted his lack of belief by violating some of the most basic commandments. The response of the sages? Not only did he lose his good name, he lost his name itself. No longer was he called Rabbi or even Elisha ben Abuha. His new “title” was Acher- Hebrew for “the other”.

By betraying his beliefs and his heritage he forfeited his identity.

That is a Talmudic message equally relevant for our times. I applaud the United States Holocaust Museum for its action in revoking a prestigious award given to someone who no longer serves as source of inspiration or model for emulation. Indeed, it is not only her honor which needs to be expunged but her very name itself. Let the Memorial record that the Holocaust Museum gave well-deserved tribute to Elie Wiesel – and also mistakenly to “Acher” – “somebody else”.