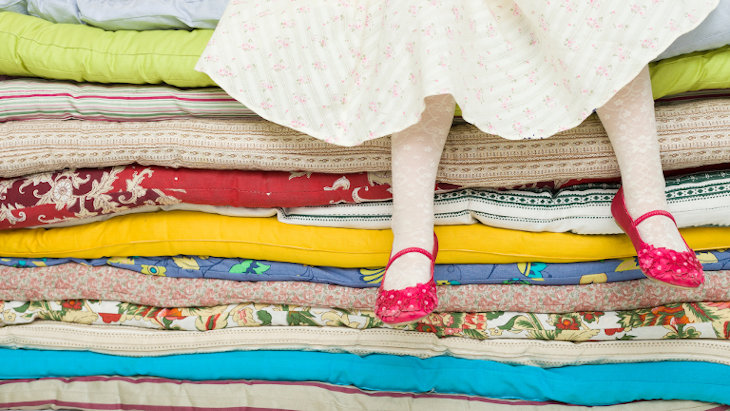 Apologies to the Princess & the Pea, but you won’t be a Jewish princess!

Once upon a time, a gentile independent publishing firm reached out to me with this email…

Hello! We see you have special skills for making things Jewish. We’ve read about your Jewish Barbies, your Jewish board games, and even a Jewish Twilight Zone. We’d like you to convert classic fairytales into Jewish ones by changing characters’ names so we can have a new book series to sell to synagogue communities across the world. Especially during these times, they need more reading material.. Easy peasy! Are you in?

They tried to be clever by signing it, “Sincerely, The Brothers Grimmstein.”

I couldn’t restrain myself and replied with the following:

Unfortunately what you’re talking about will never go over well in the Jewish community. And trying to simplify it by calling someone ‘Rachelella’ instead of ‘Cinderella’ is meshuggah.

To properly convert fairytale characters would entail years of Torah study and must be done under the supervision of an established beit din. They’d need to be individually dunked in a mikvah, (Yes, even the Little Mermaid!) and all the males circumcised, plus it would take a lifetime commitment – which I’m guessing wouldn’t fly with Disney even if presented on a kosher magic carpet.

But let’s pretend somehow we managed to accomplish this – you’d still have major plot holes and character fatal flaws. Consider the following:

I don’t want to make it all sound hopeless, so I’ll end by saying that you may have some luck with Little Red Riding Hood as she gathers flowers in the woods for her grandma -- visiting the sick is considered an important mitzvah! I’m sorry I couldn’t be of more help.

Hello again! We see your point and so we’ll switch to short nursery rhymes. Please name your price for making the most famous ones sound Jewish.

So of course I had to immediately reply:

Sorry again to foil your plans, but keep in mind these logistics:

Again just to end on a positive note – there are certain possibilities with ‘Twinkle Little Star.’ That star can be one of the three that appear in the sky, designating the start of Havdalah. Do you want me to get to work on that rhyme ASAP?

And . . . crickets! I never heard from this publishing company again, but I assume they found a way to live happily ever after.