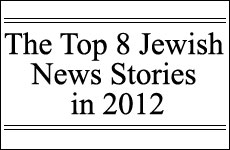 As a public service, I’ve researched and selected the top Jewish stories of 2012 so you won’t have to. You’re welcome.

JEWLARIOUS SATIRE – You have a busy life. I know that. It’s understandable, then, that you may have missed one or more of the following top Jewish news stories of 2012. Heck, I feel lucky you have the time to read even this summary. Anyway, as a public service, I read hundreds of pages of research on each of the following stories and boiled each down to a paragraph, along with a few of my own comments. Just wanted to keep things user-friendly for you. Because I like you. I mean, I don’t really know you, but I just have a feeling that if we were to meet and hang out, we’d really hit it off. But I digress. Here are the stories.

1. Netanyahu: Iran Could Have Bomb Unless it Faces a "Red Line"

Israeli Prime Minister Benjamin Netanyahu, wearing a satin jacket emblazoned “Team Netanyahu,” told the UN General Assembly that, aside from placing an embargo on falafel shipments, a firm ultimatum to Iran is the only peaceful way to stop the regime in Tehran from getting atomic weapons. Netanyahu made a case for telling Iran explicitly where it must stop to forestall an outside attack and warned that time was running out. Netanyahu said Tehran's progress would be irreversible by next spring or summer – by then it would no doubt have possession of a bomb “that would be nearly as deadly as Lindsay Lohan’s career.”

In his speech, Netanyahu thanked the U.S. president for ruling out a Cold War-style containment strategy for Iran, saying that the clerical regime in Tehran would not be as responsible as Soviet leaders. And he talked about the U.S. and Israel working together to stop Iran and Lohan – and to encourage David and Weiner to get back to work.

The United Nations General Assembly endorsed an upgraded U.N. status for the Palestinian Authority, despite intense opposition from the United States and Israel, both of which included frown-face emoticons in its official Tweets. The vote was 138 delegates in favor of the measure, nine against and 40 abstentions, and one “sorry, I was in the bathroom.” The resolution elevates Palestine’s status from "non-member observer entity" to "non-member observer state," the same category as the Vatican, which Palestinians hope will provide new leverage in their dealings with Israel. To further identify with Vatican status, Palestine’s U.N. officials wore pointy hats, embossed golden robes, and satin slippers.

It comes on the heels of an eight-day conflict that raged between Israel and Hamas fighters, where a series of airstrikes and rocket launches drew international attention, threatened regional stability, and interrupted broadcasts of “Lost” and “Two and a Half Men.”

Palestinian Authority President Mahmoud Abbas rejected Prime Minister Benjamin Netanyahu's offer to resume negotiations without preconditions, prolonging the long-standing impasse in the peace process. Netanyahu's proposal was presented in an official letter delivered to Abbas by the prime minister's special envoy for peace talks, attorney Yitzhak Molcho. Despite the rejection, Abbas sent Molcho back to Netanyahu with a bag of fresh Palestinian pastries, prompting Molcho to begin his report to Netanyahu by saying, “I’ve got some good news and some bad news.”

After continued rocket fire into Israel, the Israel Air Force struck over 100 targets in Gaza using precise intelligence information. The operation immediately became successful after changing its name from “Operation Pillar of Hamantaschen.” The IDF said that many of the weapon storage facilities that were targeted were located in civilian buildings – apparently in hope that the IDF would not bomb those buildings. The IDF responded, “Nice try.”

The air force began airdropping leaflets on Gaza warning civilians to stay away from terror hubs. The leaflets were titled, “We really recommend that you go bowling on upcoming bombing days.” The IDF stressed that terrorists are the targets of the army's strikes, not civilians. The terrorists responded, “Hey, maybe we’ll go bowling, too.” The IDF further said that all Gaza terror groups have taken part in the latest escalation in rocket fire, with Hamas leading the efforts. There will be an upcoming planning meeting for the newly assembled Hamas Bowling League.

The U.S. State Department has authorized a reward of up to $7 million for information leading to the location of Muhsin al-Fadhli, the leader of al-Qaeda's network in Iran. $5 million was offered for Adel Radi Saqr al-Wahabi al-Harbi, who serves as al-Fadhli's deputy in Iran. The Israeli government has chipped in an additional $3 million, plus a buffet dinner at Moishe’s All-You-Can Nosh Kosherteria. The move further exposes al-Qaeda's "critically important Iran-based funding and facilitation network," said David S. Cohen, Treasury undersecretary for terrorism, financial intelligence, and truly horrible people doing absolutely disgusting things.

In return for refusing to conduct operations or recruit operatives from inside Iran, al-Qaeda is given the freedom to operate by the Iranian government and uninhibited ability to travel for extremists and their families, the Treasury Department says. As a result, says Cohen, “the U.S. has decided to cross Iran off our Christmas card list.”

6. Poll: Most Egyptians Hate Israel, But Don't Want War with It

The Menachem Begin Heritage Center published a poll showing that more than 85% of Egyptians oppose any type of normalization with Israel and want to see a worsening of relations, even to levels of "hatred." The levels of hatred would include: Abhorrence, Contempt, Revulsion, Animosity, Hostility and Repugnance. However, the survey also showed that 90% of Egyptians believe that peace is preferable to war, and that the peace treaty with Israel was the "right choice." In a related poll, 70% of Egyptians admitted secretly yearning for homemade noodle kugel, “especially when accompanied by a nice serving of gefilte fish…with a carrot on top.”

"If you attack Israel, you are attacking the United States," visiting U.S. Senator Daniel Inouye (D-HI) said on a visit to Jerusalem. “And if you insult Manishevitz wine, you are also insulting the U.S.” Furthermore, stated Inouye, “If you don’t enjoy the comedy of Woody Allen and Mel Brooks, you don’t enjoy the comedy of the U.S.” Inouye is America's senior senator, serving since 1963. "If one looks at most of this world, especially the Middle East, one country stands out as a foundation of stability and as a pillar of democracy. And at a time like this, when you have revolution in Yemen, Bahrain, Syria, Egypt, Tunisia and Jordan, thank God we have Qatar," he said. “Just kidding, I meant Israel.”

Inouye, who lost an arm while fighting in Europe during World War II, and was later decorated with a Congressional Medal of Honor, dated his connection to Israel to 1951 when he was a salesman in Hawaii for Israel Bonds. “And if you’ve ever tried selling an Israeli Bond to a Hawaiian on a surfboard, you know how challenging that can be.”

Thousands of Israel boosters waved blue and white flags as they marched up Fifth Avenue on Sunday for the annual Celebrate Israel parade. Attending notables included New York City Mayor Michael Bloomberg, Gov. Andrew Cuomo, Sen. Charles Schumer, and comedian Gilbert Gottfried. Formerly called “Hey Israel You Totally Rock!” the event celebrates the birth of the Jewish state in 1948 and the birth of the knish in 1910. It draws students from yeshivas and Jewish day schools around the northeast as well as members of Jewish groups and synagogues, plus a selection of couples that had made it past the first three months after having met on JDate.

Chinese Decide to Eat Jewish Food on Their Holidays

If I Can Make It There
The Blue Beyond
Great Place to Live
Is Eating Supposed To Be Spiritual?
Comments
MOST POPULAR IN Jewlarious
Our privacy policy