The Three Boys & the World 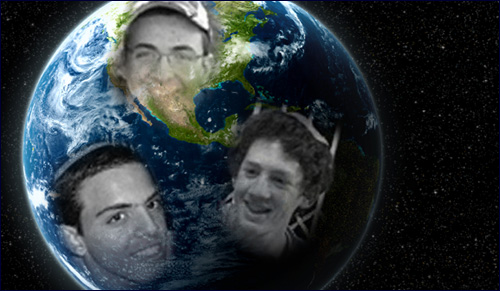 We are indeed one family. And one that dwells alone.

More than a week has passed. Naftali Frankel, 16, Gilad Shaar, 16, and Eyal Yifrach, 19 are still in captivity and all we can do is continue to pray – to pray that they are still alive and to pray that they will soon be reunited with their families, their friends and all those who love them.

Initially I thought my pain was greater than most. Naftali is a cousin. Just a few short weeks ago I celebrated the traditional Yom Ha-Atzmaut Bar-B-Q with him at his home, together with our family.

We’ve come together united by sorrow, hope and the profound conviction that all Jews are responsible one for another.

In the days since the news of his horrible kidnapping I discovered that my relationship with Naftali is no different than the one he shares with Jewish people around the world. It is literally no exaggeration to say that we are all one family. The pain of one parent missing a child is a pain shared by every Jew. Totally secular or devoutly religious, head covered with knitted skullcap or black hat, Israeli or citizen of any other country in the Diaspora – all have come together in the aftermath of this tragedy, united by sorrow, by hope and by the profound conviction that indeed all Jews are responsible one for another.

But with all this there is another realization that has become starkly evident. It is a painful truth – and one that has an ancient biblical source. It was uttered by Balaam, a non-Jewish prophet who came to curse the Jewish people but ended up uttering words of blessing placed into his mouth by the Almighty. “Lo,” he said, “it is a people that shall dwell alone, and shall not be reckoned among the nations” (Numbers 23:9). Jewish destiny is defined by uniqueness. Alone among the nations, Jews will always be identified as those who march to the tune of a different drummer. Jews will be guided by the moral and ethical mission to which they subscribed at Sinai. And for this they will be hated.

“Conscience is a Jewish invention,” Hitler declared. “It is a blemish like circumcision. I am freeing man from the restraints of an intelligence that has taken charge, from the dirty and degrading self-mortification of a false vision called conscience and morality.”

It is not true that anti-Semitism is irrational. We are not reckoned among the nations precisely because we “dwell alone.” Our commitment to conscience, to the still small Divine voice within us that calls upon us to live up to having been created in God’s image, is an ongoing reproach to those who prefer the unfettered lifestyles of the immoral and the depraved.

So even when the indisputable evil of the kidnapping of innocent children is perpetrated against Jews, we find ourselves alone. So alone that the only response from the head of the United Nations is to question whether in fact a crime was committed.

Even the supposedly civilized world falls so short of an appropriate response when Jews are the victims. The President of the United States has so far remained silent. His wife Michelle, so troubled by the plight of the girls kidnapped in Nigeria that her hashtag sign pleading for the return of these endangered young women made headlines around the globe, does not seem to have been similarly moved to action by the plight of the Israeli teenagers. Most startling of all is the comment of the State Department spokesperson Jen Psaki: “We recognize this is an incredibly sensitive and difficult circumstance on the ground, and we feel all sides should exercise restraint,” she stated at a press conference last Wednesday.

So too, the New York Times, in its typical attempt to appear to be the voice of a “sane and balanced approach” in the aftermath of any unprovoked attacks on Israel or its citizens, rushed to condemn the Israeli government for its “overreaction.” After all, its editorial staff simply couldn’t understand why there is so much furor over the fate of but three of its children.

Each One a Universe

Let us take this opportunity to make one thing very clear to the media and to the world. God began creation with only one human being to teach a powerful truth: Every person is a potential world. Every individual is a universe.

Steven Spielberg understood it when he closed Schindler’s List, his masterpiece on the Holocaust, with the Talmudic quote that “he who saves but one life is as if he saves an entire world.” Jewish law codifies it when it mandates that we never count people by number. If we need to know whether there is a minyan, a quorum of 10 for prayer, we turn to those present and say, “not one, not two, not three...” because no person should ever be viewed simply as a number. That indeed was one of the unspeakable crimes of the Nazis, who began their debasement of the Jewish victims by depriving them of their identities as individuals, henceforth to be known only by their tattooed numbers.

The Holocaust only became real to many when it went from the tragedy of 6 million to the profoundly moving story of Anne Frank, one precocious and profoundly talented young girl whose dreams were turned to ashes in the flames of the crematoria.

Of all the cruel comments to surface from the world’s reaction to last week’s tragic events, perhaps this captures best why it still does not deserve to be called civilized. “Only three youngsters” the New York Times claims, as it proceeds once again to criticize the “overreaction” of a Jewish people who treasure every child as a world, every Adam as a potential progenitor of countless generations to come.

It is only the remarkable response of Jews around the world that gives me a measure of hope for the future. And for that reason I have every confidence that God will answer our prayers for good and for blessing.

The Great Tu B'Av Project
What Makes Eli Run?
The Tyranny of Materialism
Science Enters the Mysterious Inner World of Consciousness
Comments
MOST POPULAR IN Israel
Our privacy policy