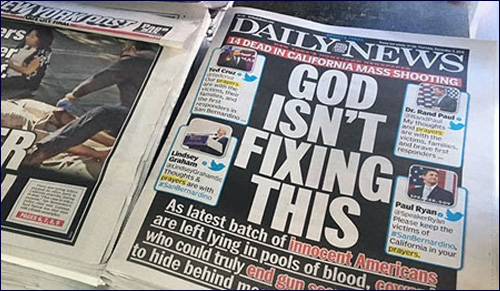 Why those who think “God isn’t fixing this” are wrong.

In the aftermath of the horrific terrorist attack in San Bernardino a new phrase – prayer shaming – has made its way into the coverage of much of the media. In its own way, it too is an attack on the spiritual values that define our civilized society. 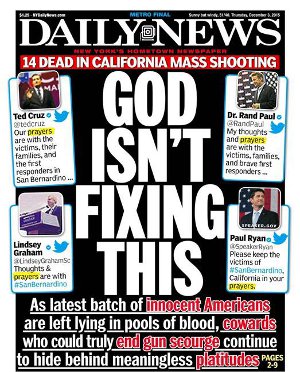 “Prayer shaming” describes the reaction of a significant number of commentators in the press and social media to a response to tragedy that in the past would almost certainly have been greeted with respect and reverence. The blazing headline of the NY Daily News illustrated it most starkly. Following a caption in eye-catching red “14 dead in California mass shooting” a super large font screamed the message: “God isn’t fixing this”. That was trailed with these words: “As latest batch of innocent Americans are left lying in pools of blood, cowards who could truly end gun scourge continue to hide behind meaningless platitudes.”

Just in case you don’t fully understand the paper’s intent that prayers are no more than platitudes, that turning to God in a time of crisis is a cowardly reflex achieving nothing other than the avoidance of personal responsibility, the headline sarcastically adds quotes from four politicians offering prayers on behalf of the victims and their families in order to mock them as archaic and pious sentiments which have no place in the real world confronting evil and terror.

Our nation’s Pledge of Allegiance speaks of one nation under God. Prayer-shamers, however, don’t believe the Almighty “can fix” anything and any mention of His involvement in our affairs and any call for His assistance is nothing less than an abdication of our own obligations.

What an incredible perversion of faith and lack of understanding of prayer.

Man becomes truly powerful only when he comprehends his human powerlessness.

In a remarkable passage in the Torah we find the perfect paradigm for the relationship between prayer and personal responsibility, between our dependence on God and our recognition of the need for us to exert our own efforts to the best of our abilities. When Amalek attacked our ancestors shortly after the Exodus from Egypt, Moses instructed his disciple Joshua to form an army and fight the enemy. But at the same time Moses, aided by Aaron and Hur, son of Miriam, ascended a hill overlooking the battle in order to fervently pray for victory. The link between prayer and battle, divine assistance and human effort, was profoundly illustrated by what happened next. Whenever Moses lifted his hands in prayer the Jews gained the upper hand in combat. Whenever Moses stopped beseeching God, the tide of war shifted in favor of Amalek. Once understood, Moses didn’t stop praying for even a moment – and that is what assured victory.

Man needs God – and God wants man. Man becomes truly powerful only when he comprehends his human powerlessness. Prayer is the link between the creator and his creations. Without prayer man thinks he is God – and that unwarranted sense of ego insures his defeat and destruction.

And that is the meaning of faith. Faith is not knowing what the future holds. It is knowing who holds the future.

Prayer defines us. Prayer gives us hope. Prayer puts into words the values we hold most precious, the people we most treasure, the ideals for which we live and for which we are prepared to give up our lives.

When the survivors of the San Bernardino massacre realized they were saved they did what countless generations past did in similar circumstances. They prayed. They prayed because they could not help but express gratitude for their deliverance. And together with all those who heard of this calamitous event they joined in prayer for the souls of the victims. Those who perished will find eternal reward in the heavens above – and our prayers will keep alive their memories for us here on earth.

So yes, God is fixing this - and the answer to the evils of Isis and the terrorists of our times is what it has always been, the partnership between our efforts and God’s intervention. For the first, we need to do battle; for the second we need not to shame but to share in a collective groundswell of impassioned prayer, the kind of prayer which will convince God that we truly deserve God’s redemptive intercession.

A Letter from God

So You Don't Feel God in Your Life?