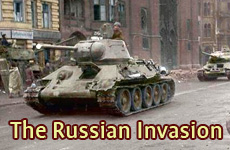 Had we taken Hitler's book and speeches literally, we might have acted differently.

I was 19 when Russian tanks arrived in Chorostkow. That day, September 17, 1939, marked the end of an era and the radical beginning of another. It would be the watershed moment that closed the chapter on centuries of Jewish life in Poland; it marked the day that everything familiar to me, and to all the hundreds of Jewish shtetls in Galicia, would be forever transformed.

The invasion and division of Poland by the Germany army in the west and the Soviet army in the east had begun two weeks earlier, on September 1, 1939. Everyone in Chorostkow remained within earshot of the radio throughout the day. Many people gathered at the café in town to hear the frenzied news reports of the bombing of Polish cities by the German Luftwaffe. We wondered how far east their vicious tentacles would reach. Shocked at this blatant aggression and hopeful that the Western nations would not tolerate it and that the war would be short-lived, we nevertheless trembled in anticipation of what might happen.

From the moment that Hitler had been elected chancellor of Germany in 1933, we heard about the hateful anti-Semitism contained in his book, Mein Kampf. We had also listened to venomous speeches on the radio and knew he wanted to rid Europe of Jews. After all, he said so straight out. But how far could he carry this hatred? How much of this threatening diatribe was rhetoric? And how much could he actually accomplish?

In retrospect, had we taken this book and speeches literally, we might have acted differently. Still, the obsessive anti-Semitism seemed so extreme that many of us dismissed it as irrational, unbelievable. Even after the invasion of Poland had begun, few suspected the disaster it would bring for the entire country or the consequences it could have for Jews.

Facing little military opposition from the Polish army, the German Wehrmacht took over western Poland. The country was divided between the Soviet Union and the German Third Reich, in fulfillment of the infamous Molotov-Ribbentropp pact that had spelled this conquest and sharing the spoils. The socialists in town were shocked that the Russians had entered into such a deal with the fascist Reich. They had made a deal with the devil. If only the shock and dismay could have ended there, but the atrocities that were to follow made this initial betrayal seem tame.

Until the Russian tanks arrived, I had thought of myself as a young man living in a traditional society, the way my father had before me and his father before him, in a lineage stretching back for centuries. We were concerned with making a living in a family-owned business, with hoping for good weather on market day, with praying three times a day, with creating a Jewish, God-conscious home where Mitzvot were more important than anything else and where wives and children could prosper.

With the start of the Russian occupation, everything had changed. Overnight, I became an adult facing the challenge of a frightening reality. No one could guess at that point what the outcome of a large-scale European war might be. Neither did we know what kind of life Jews would have under the Soviet secular, anti-religious regime.

The air-raid sirens, which began to shriek throughout the town, ended, in one instant, hundreds of years of peaceable Jewish existence and relative security in Chorostkow. Since there were no bomb shelters, people merely left their homes and sought safety in the fields or down by the pond. When the high-pitched wailing of the sirens suddenly stopped, an eerie silence descended over Chorostkow. Today I count that time as the moment when I grew up.

On Friday night, two weeks after the war started, our family gathered around the Sabbath table, and everyone did his or her best to fulfill the mitzvah of greeting the Sabbath Queen with joy and song. Underneath, though, we were wondering how long it would take for the Germans to show up. We hadn't then considered that it might be the Russians. We were forbidden to discuss such grim matters on the Sabbath lest they spoil the sanctity of the day, and so we refrained from mentioning the war, despite the fact that each of us could think of nothing else.

Finally, my father turned to his family and guests, and said in a halting voice, "My dear ones, we all know that there are difficult times ahead of us. But we must trust in the Rock of Israel, who has never allowed His people to suffer destruction. With His help, this too shall pass." Some around the table murmured, "Amen," and others nodded in agreement.

On Saturday evening, after the Third Meal of Shabbat, as my family was preparing for Havdala, the ritual at Sabbath's close, we heard airplanes in the distance. Silence fell over us as we waited for the bombs to fall. But there were no explosions. We waited some more, and when the airplanes seemed to recede, my father filled the cup with wine, opened the box with incense, and lit the special braided candle used only for Havdala. Over the blessings marking the difference between the sacred and the profane, between the Sabbath and the regular weekday, we prayed to the Almighty to protect our family and our nation, to usher in an era of peace and to help us find our way.

This was to be the last Sabbath we would celebrate freely as Jews. The next day I rose early to prepare for Monday's market. I heard an unfamiliar rumble and ran to the window to see what was happening. Strange vehicles with red stars painted on the sides filled the streets. They had tracks instead of wheels, and each was fitted with what looked like a cannon. They were Russian tanks. I knew then that there would be no market that Monday.

The Red Army had crossed the Polish border during the night, and since Chorostkow was so close to it, they reached us early that morning. Russian soldiers in khaki uniforms began distributing leaflets to the frightened population. They read:

"We have come to liberate the population from the Polish yoke."

Jews who had been hiding in cellars and attics started to appear on the streets, happy to see Russians instead of the murderous German soldiers. Some went over to the Russian tanks and kissed them with gratitude, not only for saving them from the German onslaught but also from the Ukrainian neighbors who were waiting for the first opportunity to attack Jews. There was good reason to fear the Ukrainian peasants. They had appeared from the countryside, armed with axes, pitchforks, and knives, waiting for the moment when they could begin assaulting the Jewish population and plundering homes. Their very presence struck fear in the hearts of Chorostkow's Jews.

It soon became clear, however, that Jewish life in Chorostkow and, for that matter, in the rest of Poland was not going to remain the same under Soviet occupation. Zionist organizations were declared illegal and forced to disband. With them went many people's hopes of emigrating to Israel. In addition, the Soviets were anti-religious and did not look favorably on Jewish life, its practices and education. Finally, as Communists, the Soviets were against any private enterprise, no matter how small.

After two years of the Russian occupation, on June 22, 1941, Germany declared war on the Soviet Union. As German tanks began rolling toward the new Russian border, Stalin drafted all able bodied men into the army to fight the Nazi fascists. My two brothers and I were strong, young and healthy candidates for Stalin's army.

My oldest brother, Avrum Chaim, was also drafted into the Soviet army on June 24, 1941, a Sunday – two days after Germany attacked. Officers came into town and told him and about a thousand other young men to come with them. The Germans were approaching Chorostkow and there seemed little time to waste. The soldiers kept the young men congregated at the soccer field and remained there for the entire day. Not for a moment did I leave Avrum Chaim's side.

When finally the young men were shepherded to the railroad station, I accompanied them. I said goodbye to Avrum Chaim with a heavy heart as though I had a premonition that I would never see him again. I held him close to me and cried openly when the train pulled out. His warm smile and waving hand are my last images of him....

... Hoping against hope that when Hitler was defeated we would all be reunited, I left the station when the train was out of sight and walked slowly and sadly home. But Avrum Chaim and his platoon were captured by the German army, and, despite his status as a prisoner of war, he was brutally murdered for the crime of being a Jew.

The Auschwitz Album: Visual Evidence of the Process Leading to the Mass Murder
Why Are The Prayers Of Yom Kipur So Repetetive?
Ha'azinu 5783: A Time for Unity!
Twisted Thinking
Comments