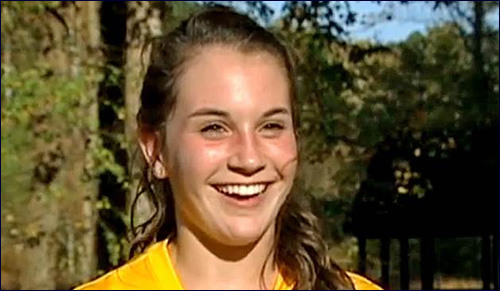 Post-Purim inspiration from a marathon runner with M.S. whose legs go numb when she runs.

Three years ago Kayla Montgomery was diagnosed with multiple sclerosis. She was 15 years old and a member of her high school track team. Since her diagnosis, Kayla has gone on to become one of the fastest young distance runners in the country. But she cannot remain on her feet once she crosses the finish line. M.S. blocks nerve signals from Kayla’s legs to her brain so she can reach speeds that cause other runners pain that she can’t sense.

But the disease also causes weakness and instability. So while racing the numbness allows Montgomery to go on autopilot, but when she stops, she loses control and collapses.

“When I finish, it feels like there’s nothing underneath me,” Montgomery said. “I start out feeling normal and then my legs gradually go numb. I’ve trained myself to think about other things while I race, to get through. But when I break the motion, I can’t control them, and I fall.”

After each race, her coach braces to catch her before she crumples to the ground. Her parents run over to ice her legs.

”Coach, I don’t know how much time I have left, so I want to run fast. Don’t hold back.”

M.S. has no cure and Kayla doesn’t know how much longer she has before she will be confined to a wheelchair. Last month Kayla won the North Carolina state title in the 3,200 meters race; her time of 10 minutes 43 seconds ranks her 21st in the country.

“When she was diagnosed, she said to me, ‘Coach, I don’t know how much time I have left, so I want to run fast. Don’t hold back,’” said Patrick Cromwell, the coach of the Mount Tabor High School track team. In the national indoor 5,000 meter championship last year, officials forgot to catch her and she fell on her face, lying down on the track until someone came and carried her away.

“I didn’t want to be treated differently, and I didn’t want to be looked at differently,” Kayla said. At her state cross-country meet last year, she knocked into the heel of another runner in the lead pack and fell. Facedown, with her legs out of control, she couldn’t get up. But watching a fellow runner pass her, she summoned up her strength and crawled to use a nearby fence to pull herself up and place 10th in the race.

“Now I know I can do it,” she said. “It may take a little while, but if I fall, I know that I can get up. I make myself do it. I tell myself, ‘I know you’re tired, and you can’t feel anything and it’s hard but you’re going to finish this.’”

What Every Jew Needs

This amazing trait of stubbornness that Kayla exemplifies is one of the key characteristics of the Jewish nation. Rabbi Avigdor Miller ztz”l wrote, “Stubbornness is one of the most important traits that every Jew needs. A Jew has to be stubborn. He has to be a man that God can rely on. ‘You gave me the Torah, God. I accepted it. Don’t worry. I’ll keep it forever and ever no matter what happens, through thick and thin.” (Rabbi Miller, Emunah and Bitachon, p.216) This crucial trait of stubborn loyalty was also on full display the day after Purim.

On Purim we celebrated the survival of the Jewish people and the joy that filled the ancient city of Shushan when our enemies were defeated. Mordechai was victorious and Haman and his 10 sons were hung. We sat down to eat and drink and marvel at our miraculous reversal of fortune.

But what happened to Esther?

We don’t hear anything about Esther at the end of the megillah. She remained married to King Ahasuerus, a man she didn’t love or respect. She remained alone in the palace, separate from the people that she treasured. When she later gave birth to her son Darius, she tried with all of her heart to teach him the values of his ancestors, but he also grew up as his father’s son. He was a Jew, but Darius was also in many ways the quintessential Persian. He was a prince that was surrounded on all sides with foreign influences and beliefs.

Esther could have given up at the end of the Purim story. She had saved her people. She had made it through the searing isolation of living in the palace. Hadn’t she done enough? Instead, Esther stubbornly fought for life. She had a child in unbearable circumstances. And she raised that son with all her strength and idealism, even though she knew that she was fighting against her husband’s culture and ideas.

Imagine how many tears Esther must have cried for her son. But those are the stubborn tears that, in many ways, built the Second Temple. For it was Darius who grew up and insisted that the Jewish Temple be rebuilt. He may have been so assimilated that he didn’t even think of himself as a Jew, but he enabled the building of the Second Temple.

It’s when we’re lying face down and must crawl to pull ourselves up that we know how strong we are.

Perhaps this is the ultimate testimony to the silent, fierce will of his Jewish mother. The Queen who never gave up. Even after the last word of the Book of Esther was read and her life was pushed backstage, she didn’t stop. She continued to run, to climb, to pray, to give life. And to create light for the children of her children who still bask in her strength today.

It’s when the party ends and the lights go out that our stubborn will emerges. It’s when the spotlight is gone and we are left alone in a place we didn’t ask to be that our refusal to give up becomes everything.

And it’s when we are lying face down on the ground and must crawl to pull ourselves up that we truly know how strong we are. That’s when we feel that the heart of Queen Ester echoing our own heartbeat.

It’s the day after that we can see the tremendous power of our inner light. When we keep believing. When we keep running as fast as we can for as long as we can.

May we all use the power of our Jewish stubbornness to rebuild and achieve greatness.

Supersize Me! Ethics of the Fathers 2:8