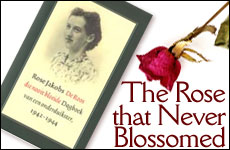 A recently published Holocaust diary that wavers between hope and despair.

Sixty-two years is a long time to wait to publicize the dramatic, tragic death of one's beloved sister. Yet Edith Jakobs Samuel couldn't bring herself to do so until her own 80th birthday, when she published Rose Jakobs' 132-page diary, written throughout the war years in Dutch. (The diary has been subsequently translated into Hebrew and an English version is in the works.)

The book, entitled The Rose That Never Blossomed, describes how their father, Aaron Jakobs, a German Jewish businessman, had the fortitude to move to Holland with his wife and four children in 1938 before the war broke out. Unfortunately the Nazi regime quickly caught up with them, and Germany captured Holland shortly thereafter.

Jakobs found hiding places for his family in several villages, but the six members were not always together. Rose, the eldest daughter, and her twin brother, Martin, spent some time alone under terrible circumstances, in constant danger of being reported to the authorities by their hosts seduced by the monetary reward for handing over Jews. She started writing her diary in August 1942 as a means of coping and to describe how much she missed her other family members.

On September 30, 1942, the then 17-year-old teenager writes: "I wish I could write everything in this diary, what I really feel and think. Right now the only thing I will write is that for someone who is not used to being locked up, it is very, very difficult to be dependent on others." Rose had been a fun-loving, active student in Amsterdam. She had many friends, and excelled in sewing, handicrafts and many other fields. The family members were very close, but the two sisters, Rose and Edith (who was 15 at the time they went into hiding), were inseparable. There was also a younger brother, Berti, aged eight.

The diary is an emotional report of a young woman who wavered between despair and hope; who had to stay in closed quarters, without making any noise and without knowing anything about her loved ones. She longed passionately to be free.

The Jakobs were reunited only in November 1943 when Aaron found quarters with a farmer in the village of Beek for all six of them. "I finally came to stay with papa and mama," she writes happily on November 2, 1943. "They received me with so much love and happiness."

"What is terrible is that last night almost all the Jews that we knew, except for 23 families, were rounded up and herded into trains like cattle."

By then the tides of the war were changing. In some of her entries we learn how Rose and her family lived in hopes of an Allied invasion, but were often thrown into despondence as the Germans rallied and continued their search for Jews, even as they fought a war on two fronts. On November 18, 1942 she wrote: "We have to stay in bed today, the whole day, because downstairs they have company. But I do not think that this is the worst. What is terrible is that last night almost all the Jews that we knew, except for 23 families, were rounded up and herded into trains like cattle."

The conditions of their confinement were most difficult. They couldn't go out, they were dependent on their hosts for food and water, and sometimes had to go without for two or three days at a time. To pass the time Rose would teach Edith what she remembered from her schooling, and Edith in turn, would teach her little brother geography, history and arithmetic. Their parents tried also to keep their spirits up, but they were themselves under great pressure. Like the well known diary of Anne Frank, we get glimpses of the tension and minor flare ups that are caused when people live in close proximity with nothing to do over a long period.

At one time the daughter of the farmer who put them up gave birth to a son. During the period that a nurse came for the birth and to care for the newborn, the Jakobs couldn't walk around upstairs in the attic or talk. They couldn't use the bathroom and they had nothing to eat for four days. Nevertheless Rose confided in Edith, "We have to be happy with what we have. We must appreciate that we're alive and together."

The longed for day finally came. On September 17, 1944 American soldiers from the Second Airborne Division parachuted by the hundreds into the area of northern Holland where they were hiding. "Our younger brother cried, ‘Angels are dropping out of the sky to save us'." Heavy fighting broke out in their village. There was house to house fighting between the Germans and the Americans. The house where the Jakobs were hiding was bombarded and the farmer's family fled. They, too, left and entered the cellar of a nearby house that was empty. But there was no food.

Edith Samuel describes their family's situation. "We had no papers. We were all pale as ghosts. My sister and I decided to leave our hiding place and help some of the American soldiers who were wounded. Their field clinic was right across the street. We were also very hungry." The Americans were happy to have the two sisters' help. One of the Jewish soldiers even informed them that September 27th was Yom Kippur. They had lost all track of time.

Then tragedy struck. "On October 2nd, 1944, as we were crossing the street to the clinic, a shell fell right in front of us. I couldn't find Rose at first. She was thrown a few meters away. I ran over to her and saw she was badly wounded. An American army doctor said sadly, ‘I'm afraid it's too late!' It didn't make sense to me. To be in hiding for over two years and then when we were about to be liberated, to die!"

Edith sat next to her sister all night long, saying Shema Yisrael and any other prayer that she could remember, but Rose never opened her eyes.

Edith sat next to her sister all night long, saying Shema Yisrael and any other prayer that she could remember, but Rose never opened her eyes.

Her parents never recovered from the ordeal and the terrible loss of their eldest daughter. "My mother turned into a zombie, and I had to take care of her just as the war was finally ending," says Edith. Rose was 19 years old when she died, and Edith was 17. In her entry on May 3, 1944, Rose had apparently been in one of her low moods as she wrote, "Today is my birthday. For my birthday I wish for a bomb, because I do not think there will be peace. I feel like crying."

Rose was buried in the forest next to the village of Beek. The family later organized a memorial service and reburied her in the Jewish cemetery in Nijmegen. Edith married Benny Samuel in 1949 and had seven children, the oldest of whom is named Shoshana (Rose). In 1969 the whole Samuel family moved to Israel where they all live today. Martin stayed in Holland where he raised a family, and Berti, the younger brother, moved to California and also has a wife and children.

"I knew that Rose's diary would be of interest to many other people, but it took me 62 years to actually publicize it," says Edith. The book was read widely in Holland, and the Museum of Liberation in Neebegan asked to do an exhibit based on Rose's story and diary. Edith and her brothers agreed. The opening was held in October this year. Many members of her family from all over the world attended, including Berti, some of Edith's children, and the offspring of the farmer who put them up in Beek, including the baby whose birth put them in to quarantine for four days. They have maintained contact with them all these years.

"It was very emotional for me," says Edith, mentioning the panels and blown up pictures of her sister that she saw at the tastefully arranged exhibit.