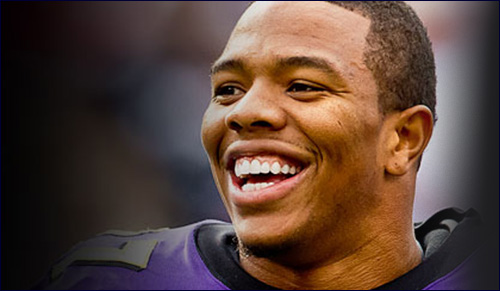 We are all caught on tape. A timely Rosh Hashanah lesson.

Ray Rice just lost his career, his multimillion dollar endorsements and his reputation – all because of a video that just went viral.

Rice is – or perhaps more correctly, was – a National Football League superstar. One of the league’s top rushers of the past few years, he was instrumental in bringing about the Baltimore Ravens 2012 championship season. As a reward, he signed a five-year $40 million contract extension that included 24 million in guaranteed money. Nike, the world’s largest sporting goods maker, paid Rice a magnificent sum to serve as their national spokesman.

All that has now come to an end. Rice has been permanently suspended by his team and the NFL as the result of an elevator video that showed him brutally punching in the face the woman who was then his fiancée, now his wife, a blow that banged her head against the rail and rendered her unconscious.

Before the video went public, Rice was given the rather lenient punishment of a two-game suspension, but it soon became apparent to both owners and fans that a far stronger disciplinary response was required. Once we actually saw the brutal violence on film almost everyone agreed there had to be severe consequences.

Too bad Ray Rice didn’t realize he was on camera. But today cameras are ubiquitous. It’s a new age where so much of what we do is actually being recorded by someone, somewhere. In fact, that very knowledge is oftentimes good enough to make us behave and to ensure that we don’t violate the law for fear of being caught on tape. A recent study shows a 28% reduction in crashes at intersections with red light cameras; if you know you’re on camera you’re not going to jump the light just because you’re in a hurry.

Our lives are being recorded.

Modern technology has added a powerful new incentive to be much more careful with the things we do in public and even when we think we are in private. But from a religious perspective it’s amazing that we haven’t realized that long before hidden cameras made us visible at red lights, in elevators and in our seemingly anonymous visits to countless places, our lives have always been recorded.

In the Talmudic text, The Ethics of the Fathers, we were long-ago cautioned: “Contemplate three things, and you will not come to the hands of transgression: Know what is above you – a seeing eye, a listening ear, and all your deeds are being inscribed in a book” [2:1].

To believe in God is to acknowledge that a higher power takes note of our daily activities. Our lives really matter. Everything that we do has cosmic significance. Our actions are noted and evaluated. They form the key to our final judgment.

Today there is a great deal of discussion about near-death experiences. It is a fascinating field made all the more relevant by way of medical advances that are able in many instances to resuscitate those who, because of the lack of pulse as well as brain activity, were considered to be dead.

What happens after we die has of course always been no more than conjecture. Yet Kabbalah, the Jewish mystical tradition, gave us some insight based on ancient beliefs. We’ve been taught that immediately after death we see a great, beautiful and warm light at the end of a long tunnel to which we seem to be traveling. As we do so we are amazed to suddenly see a visual review of our lives passing before our eyes as if witnessing it in a movie. Events that took years flash by in seconds and yet we remember and understand them. And it is then that we have the most profound emotions, both of joy and of sorrow.

When we recollect moments of spiritual achievements, of kindness to others, of study and of sanctity we are filled with a happiness beyond earthly compare. When, however, we are shown actions of sinfulness, of unethical behavior, of transgressions between ourselves and God as well as with fellow human beings, we are overwhelmed with shame. It is an overpowering embarrassment our souls feel as we are about to face our Creator with the visual evidence of our great failings. That is perhaps the most painful punishment awaiting us in what we call hell – our being forced to confront an undeniable tape of our sins.

Knowing that the divine camera records our every move should motivate us to do what’s right.

For what it’s worth, the voluminous literature on what is called near-death experiences – people brought back to life ever having been declared dead – is filled with descriptions very similar to that which has been taught for centuries by Kabbalah. The divine movie of our lives filmed in heaven is one we are all destined to view as soon as we leave our mortal remains.

Surely that knowledge ought to have profound bearing on the way in which we lead our lives at present. Knowing that the divine camera records our every move should motivate us to do what’s right.

How fitting for us to remember before the High Holy days when we stand in judgment before God that our deeds, both the good and the bad, are viewed by the Almighty and by ourselves at the end of our days. And the consequences of our visual record are at least as serious as what happened to Ray Rice when he failed to take note of the man-made camera in the elevator.

Menorah Twisted into a Swastika

Suddenly Goodbye
Olivia Newton John’s Grandfather was a Nobel-Prize Winning Jewish Physicist
Don’t Believe in Other Gods Versus God is One
Seeing Without Eyes
Comments
MOST POPULAR IN Current Issues
Our privacy policy
Aish.com Is Looking for Great Writers