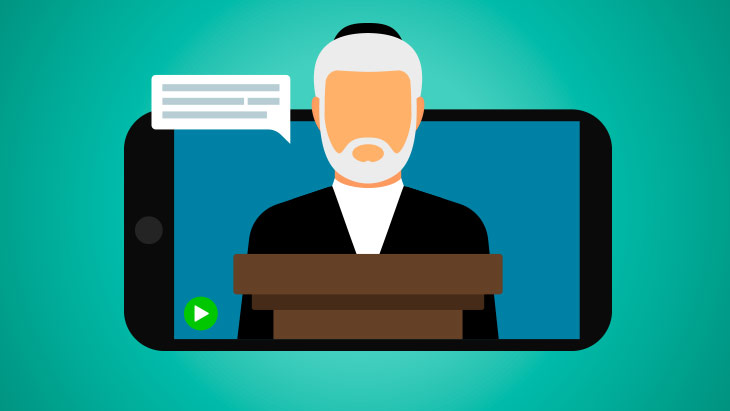 I’m Jewish but not at all religious. Yet somehow I found something in the rabbi's words and feel less alone.

I don’t know what made me do it but it was probably the beard. That unwieldy salt and pepper facial growth that would demand pulling if it wasn’t also mingled with respect and intimidation brewed from childhood. Kind of like Santa, he also wore spectacles and a look of wisdom, but the rabbi’s expression held more solemnity than sparkle.

It had been a typical morning aimlessly scrolling Facebook, looking for something to catch my attention and pass the time… a friend’s kid’s accomplishment to like or roll my eyes, a shared article on managing through the pandemic, a political meme, a goofy dog pic. Every day the same, hiding in social media to take my mind off other bigger things that I couldn’t seem to find… a purpose, meaning.

I had passed his rumpled, religious face before and barely paused. Why was today different from all other days? I didn’t know, but whatever the reason, I felt compelled to click and listen to this Rabbi of a synagogue other than my own, delivering words of wisdom on a weekly Torah portion about the life of Sarah, but really about her death because, as he explained, that was really where you learn about a life, by the love and lessons you pass on.

I’m Jewish but not at all religious. While we are members of a conservative temple, my family is really reform. More tradition than Torah. More community than kosher. Fifteen years ago, with an almost three year old and an infant, it was the temple’s location just blocks from my new home and the warm, hippie-vibe of its nursery school that ultimately persuaded us.

My grandparents on my mother’s side were loosely Orthodox and I have fond memories of my grandma lighting the Friday night Shabbos candles and of accompanying my grandfather to shul on Simchat Torah for a candied, unnaturally bright red apple. My own upbringing was far more secular - fudging our way through Passover, showing up to temple on the high holidays, and my brothers celebrating their bar mitzvahs with a little more glitz then authenticity. My husband’s family, also Jews from Brooklyn, weren’t so different, similarly following the route of many of our chosen, in the regard that we chose what rites and passages were important to us.

My husband and I pooled all our conflicting, mish mosh, orthodox, unorthodox values together when raising our own family. We would join a temple. We would observe the holidays. We would send our boys to Hebrew school culminating in two bar mitzvah graduates giving kvell-worthy performances, with the final one coming up next month. I have even held the co-chair position as President of the temple’s sisterhood, but even as I write that, it still surprises me. I have always been proud of my heritage but not really connected. Just someone who follows the rules and wants to generally do the right thing.

Yet, this clearly orthodox man in his Saturday morning white button-down shirt that pulled at the buttons and was just a wayward hair above disheveled, spoke to me. In a clear, gentle voice, he talked about the journey. About living a life that doesn’t have to be perfect, just lived with purpose, each day trying to put forth love and kindness towards others, even if you don’t succeed, that the trying could be purpose enough.

The rabbi’s talk makes me feel like even my floundering is okay. That it is all part of the journey.

Some days, as with all of us humans, I do better than others. The children are sprouting all around me, and I now find myself looking up to meet their eye as they run off doing their own thing, while I look around for something to do. Write. Read. Cook. Clean. Walk the dog. Thank God for the dog. I’m searching for something. I just don’t know what yet. Volunteer work? A hobby? Motivation? Passion? Some new way to feel connected and satisfied, intellectually and emotionally.

The rabbi’s talk makes me feel like even my floundering is okay. That it is all part of the journey.

With my final child in the 11th hour of bar mitzvah preparations, I hear the prayers and blessings of his sweet voice warming our home in practice. It delights me, fills me and warmly reminds of the parents and grandparents who played their role in who we are today, as Jews and as people.

My grandmother’s Mahjong group. My father-in-law’s obsessive kissing of the mezuzah, nine times, once for each grandchild. My grandfather leading the Passover seder. My husband’s grandma, who called me Shayna Maidel, hand grating the potatoes for latkes. They are all here with us. And somehow even in my secular life, I feel bound to the history of those who came before me, who left their marks, even when I didn’t think I was paying attention.

A life is more than your life, the rabbi said. There is a second level. And that is the ‘what follows’, the values that are passed down. Somehow in his words, I have found something and feel less alone. Like I am on a different path but still walking in their footsteps.

Alisa Schindler is a freelance writer whose essays have been featured online in the NYT, Washington Post, Brain, Child, Parents, Kveller, and The Well at Northwell Health, among others. In her spare time, she writes suburban fiction. Find out more about her at alisaschindler.com.

The Problem of Raising Typical Kids

Why I Send My Kids to Day School

My Grandfather's Maror
The Softball Player
How This 6 Generation Bread Baker Brought Back Israel’s Ancient Grains
Olivia Newton John’s Grandfather was a Nobel-Prize Winning Jewish Physicist
Comments
MOST POPULAR IN Family
Our privacy policy
Aish.com Is Looking for Great Writers