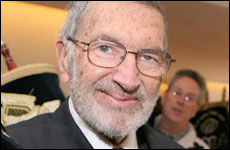 Harvey Hecker flew to Jerusalem to find out what Aish is all about. He never looked back.

Mr. Harvey Hecker z"l was the ultimate role model of one who took his responsibilities seriously. As the CEO of an extremely successful accounting firm, with 73 branches worldwide, Harvey was quite happy and satisfied with his accomplishments, he lacked nothing.

One day his son Joel broke the news to him that he decided to travel to Jerusalem to study at Aish HaTorah. Harvey, although disconnected from religion, was unfazed. But he was concerned that his son might be caught up in something nefarious, so he decided to check things out personally.

Harvey flew from Toronto to find out first-hand what this “yeshiva” experience was all about. He ate with his son, slept in the dorm with him, took classes together. After a thorough examination, Harvey concluded there was nothing to be concerned about and gave his son his full support.

Before departing back to Toronto, Harvey decided to drop into the office of the Rosh Yeshiva, Rabbi Noah Weinberg zt”l, to express appreciation for the opportunity his son was given to explore this path.

So what are you going to do about this?

The Rosh Yeshiva greeted Harvey with his unique warmth and shining countenance. He asked Harvey to be seated, and then began to discuss the problems facing the Jewish people – particularly the issue of assimilation and the loss of our youth to other religions.

Then the Rosh Yeshiva asked Mr. Hecker: “So what are you going to do about this? How will you help the Jewish people?”

Harvey was taken aback, and responded as many others before him: “What can I do about it?”

Rabbi Weinberg, who believed in people and saw their inherent potential, told Harvey: “If you REALLY want to, you can have an awesome impact on the future of world Jewry!”

These words penetrated deeply into Harvey’s consciousness, and upon returning to Toronto he decided to invite some of his business acquaintances to a parlor meeting on behalf of Aish Toronto.

After the Aish rabbi elaborated on the importance of the cause, and how each individual could make a deep impact, the men asked, ”Do you have a board”?

When the Aish rabbi responded that there was no board, they said: “Okay, let’s set up a board!”

Turning to Harvey, one of them said, “It’s your house – you’re the president!”

Without flinching, Harvey said, “No problem – if you’ll be the treasurer!”

He agreed, and thus was launched Aish Toronto!

From that moment, Harvey threw his entire being into the cause, and became a partner dedicated in body and soul. He gave of his vast expertise, business experience, intelligence, time and resources to Aish Toronto, as well as to Aish International.

Through this involvement and commitment, Aish was able to expand by leaps and bounds. Harvey became the right hand of Rabbi Weinberg zt”l, and got many of his friends involved, including Leslie Dan who has made such a great financial investment in the organization. Harvey worked to assist Aish and enable it to impact thousands of Jews worldwide, so that no Jew should be left behind!

Throughout his 25 years of dedication to Aish HaTorah, Harvey didn’t take a salary.

Actually, he did – one dollar a year!

What did Harvey accomplish?

He nurtured Aish HaTorah to become the world leader in Jewish outreach with 30 branches, give thousands of students each year the opportunity to get a sweet taste of Torah Judaism.

He always understood the problem, and every word was a priceless gem.

The wisdom he gave us was priceless. He would travel to the various Aish branches, using his vast business experience to guide them and help to solve their problems – in administration, management, public relations, personnel, finance, fundraising, networking, communications.

His influence extended to almost every area of the organization, instilling a new level of professionalism. Everyone at Aish knew that if you wanted good advice, go to Mr. Hecker. He always understood the problem, and every word of his solution was a priceless gem.

He worked and worked, bringing in tens of millions of dollars to Aish HaTorah over the years.

This is the unimaginable impact that one Aish “partner” accomplished in 25 years of self-sacrifice for God and His people.

Hand-in-hand with his involvement with Aish, Harvey took responsibility for his own personal growth in Judaism. He took classes with Aish Rabbis, grew in his observance, and – together with is wife Sheila – made their home into a sanctuary for God’s presence.

This is no simple matter. The great Mussar sage, Rabbi Yisrael Salant, used to say that many people say the Shema with the intent of accepting God’s sovereignty upon the entire world – just not upon themselves!

In fighting for the Jewish people, not only did Mr. Hecker bring others back to our Father in Heaven, but he brought himself back, too. He learned Torah with various study partners, and took steps to draw closer and closer to Hashem.

Sheila stood by as a partner in all his decisions and dedicated work for Judaism. With her sweetness and strength, she encouraged everyone who wished to become involved in Judaism and in Aish HaTorah. May Hashem grant her long, healthy and happy years, and may the merit of Harvey’s commitment to the Jewish people stand by her, their three children, and the extended Hecker family, as well as for Aish HaTorah and for the entire Jewish Nation. And may we merit to greet Mashiach, speedily in our days. Amen!

Jews, the Civil War and the Incident of Sharing Matzah at a Passover Seder

Could You Ignore a Holocaust?

Passover in the 'Hood
It Takes A Lot Of Faith To Be An Atheist
How Instagram Brought Back This Nostalgic Soup
What Makes Eli Run?
Comments
MOST POPULAR IN Israel
Our privacy policy