The Passover Seder Brought to Life 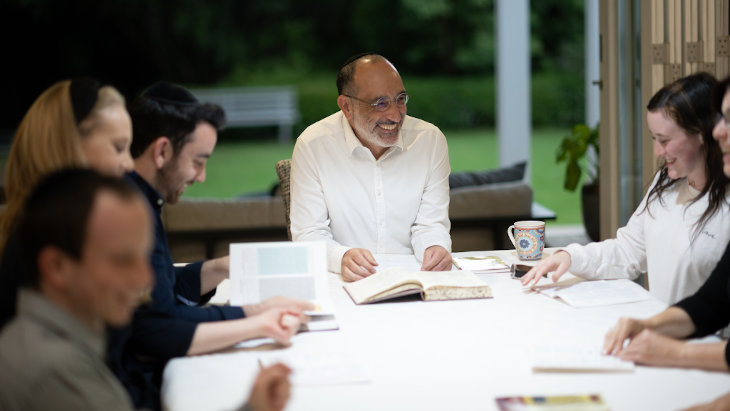 An 8-part podcast series that delves into the meaning of the Passover Haggadah.

In this eight-part series, Chief Rabbi Warren and Gina Goldstein and their children, Mordi and his wife Avigayil, Levi, Shayna, and Azi, go through the entire Haggadah together in lively debate and discussion – covering everything from the four sons, the four questions, and the 10 plagues, to matzah, maror (bitter herbs), and the Korban Pesach (Passover sacrifice).

Kadesh. Urchatz. Karpas. Yachatz. Kiddush is recited, hands are washed, bitter herbs are sampled. The middle matzah is broken. The Seder isn’t only an intellectual discussion, it’s a night of experiences – of not just telling, but tasting and touching the great origin story of the Jewish people.

Why is matzah referred to as both the “bread of affliction” and the “bread of redemption”? What is this inherent duality woven into the Seder? We recognise the constraints even of our freedom. We acknowledge the brokenness amid the blessings. We feel the pain of slavery so we can feel the pleasure of freedom. And at the heart of it all – curiosity.

Wide-ranging discussions. Who are the four sons? Why these four, and what, really, are they asking? Who were the five rabbis and what were they doing in Bnei Brak? Apathy versus anger. The importance of critical thinking. The nature of storytelling. Seeing the Seder with fresh eyes. This is not just a story, something that happened in the distant past. This is our story – and it’s happening now.

The Exodus narrative is interrupted as we step back further into Jewish history and relate our humble beginnings. This story is bigger than we at first thought, the canvas wider, the brush strokes more textured. A liberation from physical slavery and also a deliverance from spiritual unease. There is a pattern to Jewish history, and it repeats itself across time.

The biggest question of them all. Pain and adversity as a catalyst for greatness. Vehi Sheamda and the inspiration hidden within the seemingly depressing message of eternal persecution. And the four key verses that capture our past, present and future.

Signs and wonders. The laws of nature turned on its head. A nation under assault from the skies. Instant relief? It’s a bit more complex than that. How Rebbe Yehuda’s cryptic mnemonic opens up new worlds of understanding.

If we had just done 6 episodes would that have been enough?

We switch from intellectual to experiential as we uncover Rabban Gamliel’s 3 positive mitzvos of pesach matza and maror.

We’ve now reached the point in our seder journey where our hearts open up in praise and thanks to Hashem for everything He has given us. But what's the meal doing right in the middle of Hallel?

A Quarantine Seder: 7 Insights to Uplift Your Seder