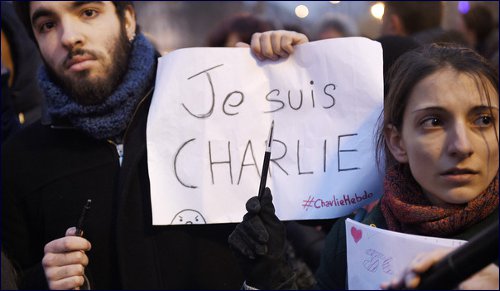 A long history of threats and violence, against Charlie Hebdo and other targets, has too often been minimized and ignored.

In the hours after the brutal assault on a newspaper office in the center of France – one of the largest mass attacks on European soil since World War II – the world struggled to understand how such a barbarous assault could have taken place.

On the quiet afternoon of January 7, 2015 three heavily armed men – French police would later identify them as two brothers and a third man, all French nationals, who returned to France after fighting in Syria’s brutal civil war – approached the offices of the weekly satirical magazine Charlie Hebdo, in central Paris. They shot the armed police officer standing guard outside, forced a terrified employee who had just returned from picking up her young child from daycare to enter the office’s entrance code, and unleashed a bloodbath, shooting employees with meticulous, military-style precision. By the time they escaped several minutes later – and after shooting a policeman who confronted them outside - 12 people lay dead and much of France was in shock.

“I don’t understand how people can attack a newspaper with heavy weapons,” said the dazed Editor-in-Chief Girard Biard, who was visiting London and so escaped the massacre. “We are shocked and surprised that something like this could happen in the center of Paris,” echoed Dalil Boubakeur, the rector of the Grand Mosque in Paris. As evening approached, crowds of astonished and grieving people formed spontaneous demonstrations, expressing solidarity with the murdered journalists, and seeking an outlet for their heartache and distress.

Charlie Hebdo would seem an unlikely symbol to unify so many people. The newspaper is aggressively offensive, mocking politicians, the establishment, celebrities and religion. One French friend of mine characterized it as “equal opportunity” offensive. Virtually every group has been the target of its nasty humor at some point, including Catholics, Jews, and Muslims. When the Danish newspaper Jyllands-Posten published offensive pictures of the Prophet Mohammed in 2006, sparking protests and riots around the world, Chalie Hebdo reprinted the cartoons – and added some of its own, as well. A 2011 edition was supposedly guest-edited by Mohammed (complete with another offensive cartoon); the current issues’ cover story celebrates a new French novel that many have characterized as an anti-Muslim screed.

The sight of crowds of grieving people reminded me of a premise from a novel by Gabriel Garcia Marquez: Chronicle of a Death Foretold. This book tells the story of two brothers who announce their intentions to murder another young man in their town. Even though they repeatedly state their intensions, few believe them. Local officials are convinced they are bluffing and ordinary citizens fail to take them seriously. By the time the violence takes place, the entire town is complicit.

As in this fictional tale, a long history of threats and violence – both against Charlie Hebdo and other targets – has too often been minimized and ignored.

Charlie Hebdo itself is no stranger to violence. On November 2, 2011, just after it announced its “Mohammed-edited” issue, its offices were firebombed. (The attack occurred in the early morning hours and resulted in no casualties.) In 2012, French officials begged the magazine not to publish more offensive Mohammed cartoons. When the magazine insisted on going ahead, France closed embassies, consulates, schools and cultural centers in over a dozen Muslim countries for fear of attack. “We want to laugh at the extremists,” a journalist said at the time, explaining his magazine’s indifference to potential reprisals over its offensive humor.

Editor Stephane Charbonnier, who’d received death threats for years – and was listed as a marked man by an al-Qaeda magazine in 2013 – was living under police protection at the time of his murder. The magazine retained an armed guard by its door and even joked about its status as a target for terror. (A cartoon in the current issue depicts a terrorist saying “Still no attacks in France – wait, we have until the end of January to present our New Year’s wishes.”)

The threats were no laughing matter. Like the brothers in Chronicle of a Death Foretold, they announced their intentions loud and clear – and repeatedly – for all to hear.

One came in September 2014, when an Isis tape advised sympathisers around the world: “If you are not able to find an IED or a bullet, then single out the disbelieving American, Frenchman or any of their allies. Smash his head with a rock or slaughter him with a knife or run him over with your car or throw him down from a high place or choke him or poison him.” On November 19, another Isis video, made in French this time, urged sympathisers to target the French: “Terrorize them and do not allow them to sleep due to fear and horror. There are weapons and cars available and targets ready to be hit... poison the water and food.... and run them over with your cars....”

In May 2014, four people were murdered in a Jewish museum in Brussels by a French national who had fought for Isis in Syria. On December 21, 2014, 11 people were injured when a man yelling jihadist slogans drove his car into a crowd of pedestrians in the French city of Dijon; two days later, a dozen were injured when another driver ploughed his car into French holiday shoppers in the French town of Nantes. These were not unforeseen events; these acts have been calmly planned, announced and too often, ignored.

Violence is rarely unforeseen. All too often it is not taken seriously enough by civilized people. It can seem bizarre and far-fetched to contemplate people willing to perpetrate horrific acts of violence; it’s much more comforting to tell ourselves that people can’t possibly mean it when they make these threats, that those promising to kill and maim must be exaggerating their evil intentions. As the attack in Paris shows, we ignore these warnings at our peril.

Iran has stated its intention to “wipe Israel off the map.” In January 2015, Hamas leader Ismail Haniyeh told a crowd of supporters of his plans to attack Israel: “We will develop our weapons so that our missiles will reach as far as possible and hit targets at sea, on land, and in the air.” In November 2014, the head of Hezbollah, Hassan Nasrallah, made his intentions clear: “Southern Lebanon is prepared to fight (Israel).... We are not afraid of war...we are a threat to Israel.” Even the supposedly moderate Palestinian Authority had its own message to Israel in July 2014, when it took possession of a new type of military equipment. Over images of a man holding a missile launcher, a video intones: “A message to the Israeli government and the Israeli people: Death will reach you from the south to the north.... The KN-103 rocket is on its way toward you.”

It’s tempting to dismiss these and other threats as empty hyperbole. The carnage in Paris unfortunately reminds us that when individuals announce their plans to kill and maim we must take their threats at face value.