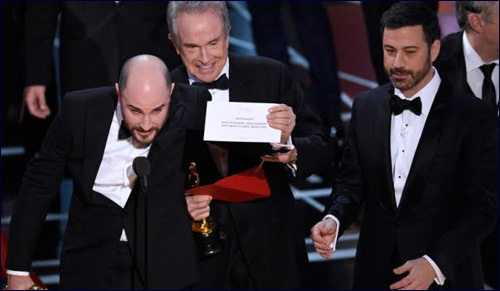 Turning winners into losers and losers into winners.

It was a stunning mix up that we’re tempted to say could only take place in the movies – but this time it happened in real life at the Academy Awards.

Oscar night is watched by millions of people around the globe. After almost 3 hours of nail-biting suspense we finally come to the highlight of the evening when the winner of Best Picture is announced. Cameras zoom in on the joyous faces of the winners. Speeches of gratitude and elation are made. Glimpses of those representing the runner-up, the film which had a chance at the crown but failed, are part of the scene as well. From them we see tears of unfulfilled dreams, sadness stoically camouflaged but nonetheless recognizable.

All of that happened when presenters Warren Beatty and Faye Dunaway announced La La Land as the winner. For a few moments the ecstasy of triumph and the agony of defeat made their simultaneous appearance on the announced victors and losers.

And then the incredible news: a mistake had been made. For the first time in Oscar history, the wrong card was read. La La Land didn’t really win. Moonlight was awarded the Oscar for the best film of the year. People who went to sleep immediately after the initial announcement couldn’t believe the headlines next morning to discover that the loser was really the winner.

Just imagine the shock and the emotional turmoil for those directly involved. The team behind Moonlight had to endure the pain of the initial announcement. They had to watch others walk up to the podium to receive the prize they so desperately wanted and listen to team La La Land’s self-congratulatory speeches. Those were surely moments which seemed like an eternity of disappointment.

But their pain was short-lived, their agony fleeting in retrospect.

Imagine the emotional roller coaster for those who briefly held the crown of success only to have it unexpectedly taken from them. Surely the distress of their loss was greatly magnified by the experience of having, if even for a brief time, tasted of the cup of victory.

The story of this year’s Oscars is a script worthy in and of itself of a powerful movie. I am reminded of a fascinating connection between this remarkable incident and a real-life Talmudic analogy that has meaning for all of us.

The rabbis long ago made an observation about the awards in store for us at the end of our days on earth. They are the awards granted to us by the Academy on high – recognition by the Almighty for the manner in which we fulfilled the roles assigned to us during our lifetimes. In a stunning statement about the “lifetime achievement awards” we will receive after our death – the spiritual Oscars for our worldly performances – the rabbis tell us that very often “those who were above will be below, and those who were below will be above.”

What is the meaning of this startling announcement? The world as we know it has its own standards for recognition, for prestige, for honor and for awards. Those who accumulate wealth in disreputable ways will undeservedly seem to win the Oscars of the world’s approval and adulation. It is when they face the judgment of the other world that they are suddenly told that there had somehow been a mix up. True, for a while they believed they were winners. But heavenly judgment corrects that mistake. “Those who were above will be below.”

So too, there are the pious but penniless, the saintly but suffering. They seem to be shortchanged during their lifetimes. Yet “those who were below will be above.” The error will be rectified. Heavenly award in the end will be granted to the truly deserving recipients.

The Talmud, in its profound way, teaches us that when Oscars are given to those who don’t really deserve them, there is a time of final reckoning. Just as the amazing ending at the Academy Awards turned winner into loser and loser into winner, life’s sequel in the world to come will finally redistribute divine blessings in equitable manner. After all, in the long run life isn’t an unjust La La land – it’s a proving ground for our willingness to live righteous lives so that in the end we will be fairly rewarded for eternity.

Mr. Death - A Bribe Blinds Even the Wise