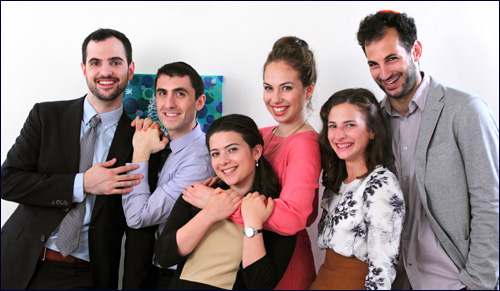 “Soon by You”, a web series about the New York dating scene, is turning heads.

Imagine this scenario: A young woman, Sarah, is waiting to meet her matchmaker-arranged date at a Manhattan restaurant. When a young rabbinical student named David sails into the restaurant and asks if she is Sarah, he sits down and they begin their date. Miracle of miracles, they are having a great time, really making this blind date different from every other blind date! They share an interest in literature and art, and have so much in common they’re practically finishing one another’s sentences. There are no awkward moments until . . . 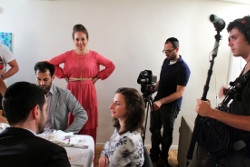 Another young man hustles into the restaurant and waltzes up to their table. He also has a date with Sarah. That’s when the trio realize that David has been sitting with Sarah Feldman, while his intended date, Sarah Jacobs, is impatiently drumming her immaculately lacquered nails over at the next table, wondering where her date is. David reluctantly gets up and moves to sit with the other Sarah, a superficial fashionista obsessed with ordering extra food to go and cloyingly eager to get married. Meanwhile, the artsy Sarah Feldman strains to make conversation with her blind date, Ben, a slick and polished guy with whom she has nothing in common. Now everyone is miserable. Will true love find a way?

This is the premise of the comedy web series, “Soon by You,” about the lives of six Orthodox singles in New York all looking for love and sometimes having to defend themselves against pushy relatives urging them to just hurry up and get married already. The clever pilot episode, “The Setup,” has already been viewed on YouTube over 80,000 times, and the second episode, (“The Follow-Up”) is approaching 45,000 views.

“Soon by You” shines a light on the world of Orthodox Jewish dating, where dates are often set up by matchmakers, ramping up both expectations and anxieties when a couple first meet. Leah Gottfried is hilarious as fashionista Sarah, but in addition to being a star of the series, she is also creator, director, co-writer, and co-producer of the series, through her production company, Dignity Entertainment.

The show may be focusing on the dating habits of a small niche population, but Gottfried is aiming at a much larger non-Jewish audience.

Gottfried hopes that “Soon by You” will win a large enough viewing audience to get picked up by a network or Netflix.

“We like to think of ‘Soon by You’ as a show with characters who happen to be Jewish instead of as a Jewish show,” she says, pointing out that the show has been likened to a kosher version of “Friends.” “I think almost everyone can relate to some of the awkward moments the characters on the show experience in dating. Dating for everyone is ultimately about connecting to another person, it’s just that in the Orthodox world there is the added pressure to date for marriage and family, and to be quick about it.”

In “The Setup,” much of the comedy and drama revolves around the multiple “bathroom breaks” that Sarah F. and David take at the same time, furtively continuing their conversation outside the restrooms, neither wanting to return to their actual dates. David is played by Danny Hoffman, who is also a co-writer and co-producer of the show. The premier episode captured “Best Short” award at the Washington Jewish Film Festival 2016, was an official selection of the L.A. Jewish Film Festival, and won several other indie film awards. Gottfried hopes that over the course of the season, “Soon by You” will win a large enough viewing audience to get picked up by a network or online media platform such as Hulu, Netflix or Amazon. 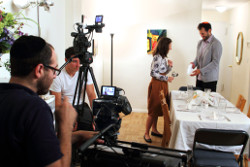 Jessica Schechter, who plays another of the friends and also one of the producers, notes that broadcasting a show online makes it easier to build an audience without geographic boundaries. She points to one email they received from Germany:

“I just stumbled upon your series, and it’s made my day! Being removed from a big community such as in New York and turning 28 and being a young professional I am thinking a lot about having missed the marriage train. We European Jewish girls need you to make more episodes so we truly have our own ‘How I met your mother’ / ‘Friends’ / ‘Srugim’ show. I signed up to Shabbat.com after watching the series and feel encouraged to come to New York for a few weeks and hopefully have a better chance at going on a date. Here in Europe it is just super tough to even meet any other Jew.”

Schechter credits the dating articles on Aish.com with much sanity-saving wisdom.

While the show is satirical, both Gottfried and Schechter are longtime veterans of the Jewish singles dating scene and have learned a lot of lessons along the way.

Schechter credits the dating articles on Aish.com with much sanity-saving wisdom. Additionally, she says, “It's not enough for someone to look good on paper. You have to listen to your gut, but sometimes people bypass that. Singles need to take the pressure off themselves. The watched pot doesn't boil. You won't make good decisions when you’re stressed. Give yourself space to breathe.”

Gottfried’s advises singles: “Staying busy with things that you love will keep you from obsessing about when the guy will call. Live your life, feel fulfilled. People who are happy and busy are more attractive in general.”

With all the pressure inherent in the Jewish emphasis on dating for marriage, Gottfried also suggests: “Let’s get the fun back in dating. People can get so focused on seeing if a person has the qualities they’ve got on their checklist that they forget to ask, ‘Do I like this person’s company? Can I let loose and laugh with this person?’”

Sometimes married couples develop “amnesia” about the single life, conveying the idea that marriage is equated with the finish line. “This cannot be the only marker of identity or self-worth,” Schechter says.

“Soon by You” is sponsored in part by the Jewish Entertainment Network of Los Angeles, and uses product placements as a means to support the series. So far, these have included the Manhattan restaurants Eighteen, Mike’s Bistro, The Navidaters, Shabbat.com, and a novel titled Outdated. New partnerships are expected in episode three, which the producers hope will air by mid-October.

The producers are cheered by the steady stream of fan mail as more people discover the episode, and it’s coming from Jews not only across the globe but across the religious spectrum.

From a single woman: “I loved the pilot episode! Living in Nebraska, it is hard to find a nice Jewish guy. I absolutely love the ideals that you guys are trying to capture. Mazal tov on the show. . . I hope bigger things are to come for you guys!”

From an Orthodox single man: “Your show gives outsiders a glimpse of the colorful lives that Orthodox Jews have. Also, for people who want to stay away from secular entertainment because of the way it objectifies women or encourages bad language and violence, this provides a kosher outlet for them. . . . I find your work important and meaningful, and your hard work will not go unnoticed. Good luck and I can't wait for the next episode and the next 20 seasons.”

Episode 3, titled “The Shabbat Meal” has been released, and you can catch up with the first two episodes here: https://youtu.be/DxDfmL4ki,ek and follow the show on Instagram @soonbyyou; Facebook: Soon By You or Twitter: @soonbyyou.

The Kosher Kritic: War for the Planet of the Apes
Megillah Gorilla Saves the Day
Challah Reuben “Grinder”
Big OnThe Little Things
Comments
MOST POPULAR IN Jewlarious
Our privacy policy
Aish.com Is Looking for Great Writers