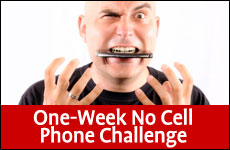 Could you survive an entire week without your cell phone? One man survives to tell the tale.

Could you survive one whole week without your cell/smartphone? That’s right, no iPhone, no Blackberry, no Android, not even one of those briefcase sized car phones from the 1980s? Believe it or not, I tried this.

Yes I am still alive.

Has our cell phone use gone a little too far?

I know what some of you may be wondering: why in the world would anyone want to be cellphone-less for an entire week? After all, in the span of only a few years, smartphones have become part of us. We can hardly live without them. According to a study done by Online Schools, about a third of smartphone users check their phones before getting out of bed in the morning. 40% of us use them in the bathroom. And 64% of us have texted while driving. We use them as cameras, diaries, alarm clocks, and to make the odd phone call (although increasingly less frequently).

Don’t cyber-boycott for raising this, but I can’t help wondering if we’ve gone a little too far.

I began thinking these heretical thoughts after I came across an interesting study by Harvard doctoral student Mathew Killingsworth that was published in Science magazine (if you are nerdy like me you can read the whole study here). Killingsworth developed an app called “Track Your Happiness” that collected data from 15,000 people in 80 countries tracking how happy they were at various times throughout the day. What Killingsworth found was interesting. We human beings are often distracted – we let our minds wander and this actually affects our happiness markedly. But mind wandering is correlated to unhappiness. When people mind wander, they report being happy only 56% of the time, while when they are “in the moment” they report being happy 66% of the time. As a result, Killingsworth recommends that for those who want to be happier, we should tune out distractions and focus on being “in the moment” whenever possible (Killingsworth’s Ted Talk on his findings is available here).

It didn’t take long to think of a time when I’m distracted.

I come home from work around 6pm and sit down to supper with my wife and two kids (5 year old twins. Yes twins are cute, thank you). I started noticing that during supper both my wife and I (sorry honey) were checking our phones fairly regularly. I knew this started to become a problem when we started having dinner table conversations like this:

“See, I told you,” my son said to my daughter, “a purple dragon did come into the family room last night and chop off a robot’s head and eat his eye balls – Abba said so.”

The more I thought about it the more I was, frankly, disappointed in myself. I get home from work at 6:00 and my kids go to sleep at 7:30. That’s an hour and a half. Can I really not try and focus my attention on my family for 90 minutes without being distracted?

Now I suppose I could have tried to gradually decrease my cell phone use at home, but that would have been too easy. Instead, I wondered if I could go a whole week with absolutely no cell phone. Cold turkey. Or more like Wild Turkey.

We were going away for a family vacation for a week and I thought that this provided the right opportunity. So we left for the airport with both cell phones back at home. I really hoped they would be OK by themselves.

It didn’t take long for the withdrawal symptoms to set it. What was I supposed to do when I was standing in line waiting at the airport? And why did I feel my thigh vibrating even though there was nothing in my pocket?

When we got to our destination we had other problems.

For example, my wife and I went shopping at a mall one day. As much as I love browsing for women’s apparel and hygiene products, we decided to split up so I could go to the electronics stores (predictable, I know). My wife said, “OK when you’re done just text me…uh…”

We both looked at each other.

What do we do? How on earth do we find one another?

My wife and I racked our brains for what seemed like hours, trying to come up with a reasonable method to locate one another.

“When we’re done why don’t we meet by the car?” my wife offered, proudly.

Children of the world, this is what prehistoric humans used to do – meet at the car.

Another time, we were downtown, relatively far from where we were staying. It was getting close to dinner time and we needed to find a kosher restaurant.

“Why don’t we go to that place, Segal’s Deli that my friend was telling us about,” my wife suggested.

Long story short, we turned around and drove home.

So modern technology has its advantages – no question about that.

But there were positives during the no cell phone challenge as well. Two examples.

The first was when we took our kids to the Children’s Museum. As I mentioned, my kids are 5 years old so let’s use the term “museum” lightly. No art history or ancient artifacts here. More like finger paint and buttons to press that make burping noises. At one point, my kids went into a play-dough activity room. They sat down at a table and started to, well, squeeze. My first thought was – time to surf the web on my iPhone!

My second thought was: sigh.

So I had “no choice” but to sit down at the table and play, play-dough. And you know what? It was awesome. We made play-dough spaghetti and play-dough people and even play-dough challah, although you aren’t allowed to eat play-dough so that last one may have been a bit of a mixed message. That play-dough time was a family moment that I will probably remember for a lifetime, and if I had had a cell phone with me it never would have happened.

I should make a play-dough cell phone and smush it.

A few days later I was sitting with my kids in an outdoor mall waiting for my wife who was shopping (again). My father was with us and we weren’t really doing anything, just sitting, waiting, so this was another time when I would have no doubt pulled out my cell phone. But because I had no choice, instead I began to (gasp) think. I looked at my father, and my son and daughter, all sitting together and I realized how lucky we all were to be on vacation, sharing this time together, three generations. I thought about the fond memories I had from vacations that I went on with my Dad when I was a kid and as I looked at my kids I realized that we were now creating these memories for them.

As the week came to a close we returned home back to real life – jobs, bills, and yes, cell phones. No, I am not going to tell you that my wife and I threw out our cell phones at the end of our one week experiment. But we did institute a rule – no cell phones during dinner, and perhaps more importantly, we gained some perspective and confidence to try and tune out the distractions and live our lives “in the moment.”

So what do you say – the one week no cell phone challenge – are you up to it?

One Drink Too Many: My Journey to Letting Go of Alcohol, Finding Freedom and Choosing Happiness
The Jewish Trader called “One Tongue” by Native Americans
Who was Two-Gun Cohen?
Why Really Everyone Believes in Free Will
Should Jews Support Ukraine?
The Jews of Cuba
Comments
MOST POPULAR IN Funny Stuff
Our privacy policy