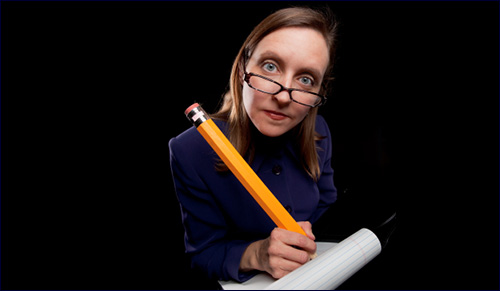 A pop quiz for my JYA mamalas. Which one of following Yiddish words is right (or righter?) Pick up a pen, OK, a mouse and ask yourself, when it comes to Yiddish am I imbued with yichus … or am I talking like a yutz?

When it comes to Yiddish am I imbued with yichus or am I talking like a yutz?

“My sister was so upset when her IDF bf unfriended her on Facebook, she’s all fapitzed?”

Answer: NO. Unless to make herself feel better she bought Dolce and Gabbana sunglasses to hide her shame. Not to be confused with all our Yiddish words for miserable that start with “f” – “fapitzed” means dressed to the nines, not checking into a Swiss clinic for the Unfriended.

“Reva, I’m texting 2 tell u we R going to my aunt’s wedding. I’m wearing a blue tux, so get ferkrimpted up!”

Answer: NO. Often confused by JYAs for “fapitz” (you look gorgeous), “ferkrimpt” means you’re walking around with a twisted punim (face). So darlings, unless you want your gf to look like she’s got a cramp just say “wear the blue with the sequins.”

“I was so verklempt with that virus in my computer, I’m buying a ticket to Kazapikiswan and put such a curse on those thieves … may their hard drive soften!”

Answer: NO. Not good. Chances are you’re not “verklempting” over your lost files and a PC that spits in Serbian. You may, however, become verklempt , tears running with emotion, when you when the nice technician after 25 hours at $100 per, plus a new computer, tells you it’s covered by insurance.

“Yeah ma. I really enjoyed making a Sukkah. It was such a shandeh for the kinder!”

Answer: NO. Unlike much of Yiddish that sounds like what it means (a schlemiel probably isn’t head of NASA), this happy sounding word is not a good deed, darlings. It’s a deed that makes you, your family, and the whole community want to hide from you in shame. Oy. Hopefully you didn’t “shame” the kinder by playing “Who’s going to be my bashert in 20 years?”

If, God forbid, you said “YES” to any of the above, you’re guilty of Yiddiosity, causing our dear Leo Rosten to rise from the grave and yell “Shmegegges, go buy my book already!”

The good news here is … you’re trying. Yes. Yiddish is making a comeback in schools, on the Net, writings, and conversations among those who think a muumuu is the sound a cow makes and our precious JYAs.

But in this new digital world where millennials have invented a new “text” lingo: “Shortening” – even our magnificent, bawdy, emotional Yiddish may have to adjust a bissel. As Judaism has always insured our customs are adaptable, I’ve come up with new Yiddish words that our JYAs can say, text and make their point Jewish-y … or “Jewdilectable (JD!).”

“Bupkiloshes”: The student with whom you share a microscope has a mouth like a broken faucet – bupkes comes out. Like Norm on Cheers, he knows nothing, talks about everything about which he knows nothing, and makes you meshugge! But he thinks he’s a genius. Should, God forbid anyone else say something, such as “Have you heard about the bitcoin?” He’s the yutz who’ll lecture the group about with how bitcoins were used by early Celtics to undermine the British economy, the Swiss used them to make cryptocuffs, and how they make unusual doggie accessories.

Text: “BPKshes” Usage: “Marvin, enough with the bupkiloshes already! I’m chaloshing from your verbal chazzerai. Who knows? Who cares? One more word and may your microbes invade your Facebook!

“Amazzerei”: Ai ai ai! You just tasted that new treat – chipotle cheese curls – at the Kosher vending machine at Dodger Stadium and what a nosh! True, one serving is three curls. Also true, it could be there’s more salt in a bag than in the Dead Sea. But this is one amazing chazzerai! More you heard they’re experimenting with pesto pretzel bites. Already you’re salivating!

Text: “aMZi!” Usage: “Listen, Becca … I know you’re on a diet, but a little amazerei wouldn’t kill us, especially if we give up the two extra corned beef sandwiches – OK half a sandwich at Wolfies later.

“Farpitztalaria”: Molly’s been your bff since Hebrew school. You both love Logan Lerman, talking about your blogsherts (PART ONE), and touring Israel. All of a sudden, her convo’s changed. She now wants you to attend a “straightening” support group sponsored by Frizz-Ease, wear Magen David ear cuffs, and choose from the cutting edge Mayim Bialik line. When you suggested she might be getting a little superficial with the hair and the fashions, it took Season 7 of Project Runway on Netflix to scrape her off the ceiling.

Text: “FPZ.” Usage: “Listen, Molly, I know you’re into fashion, but darling, another Heide Klum we need with the “Auf Wiedersehens?” Better to focus on MOTS like Bar Refaeli, Natalie Portmano nee Herschlag! But to get meshugge about looking like catwalk shikshes?! Lose your Jewfro? Bacon cuffs are not becoming. So calm down and love the exoticism that is JEWU.”

“Gefiltering”: First there was Jewish Geography then bageling to fish for fellow Yiddkeisters. So say you should be in a Jewish chat room and, using both, come up with bupkiloshes. A Gentile secretly joined to find a gorgeous, brilliant, gelted maidel or husband (they heard they make the best, nu?) The final test is “gefiltering” which, if he or she flunks, you will filter out!

Text: “GefX.” Usage: “So, Christopher, you say your people come from a small shtetl in Smorgasbordekkah. Tell me, do you prefer your gefilte sweet with soy sauce or sour with Spam?” Mamalas, if he a) sits in a stupor, or b) picks one … gefilter him!

“Glickenspiel”: So your mieskeit cousin’s had a run of luck. Despite the acne and having the I.Q. of a speed bump, she was accepted into Brooklyn Law; and with that extra toe, she found a modeling job on the reality show: “Gem Tends for the Weird and Wacky where a Rothschild texted her after she made a YouTube that went viral. Of course you’re happy for her. She’s happy for her. And now she’s making sure everyone, everywhere will be thrilled with her personal story of triumph – including details.

Text: “Spielshnot.” Usage: “My darling cuz. For you, I couldn’t be more proud. But sweetie … an extra toe that turned lucky, between us, isn’t a Kardashian moment. Enjoy darling, but making a spiel isn’t kosher. Better you should write a nice article for aish.com, nu? As we know, glick can turn, so my advice is … have a plan B when next year five toes may be ‘back.’”

More ideas? Send darlings! We must keep our Mamaloshen alive … and encourage our Millennials to understand the majesty our language, may we live so long! All ideas are welcome!

Yachupitzville Development Project Opens to Little Fanfare
Faith: the Axis Upon Which the Wheel of Science Turns
Love - Not Just About Chemicals Anymore!
Is There a Moral Code in a Virtual World?
Comments
MOST POPULAR IN Jewlarious
Our privacy policy