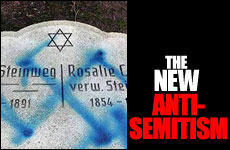 Anti-Semitism is official state ideology, turned into a force to recruit thousands in a new crusade.

Hatred of Jews has reached new heights in Europe and many points south and east of the old continent. Last year I chaired a blue-ribbon committee of British parliamentarians, including former ministers and a party leader, that examined the problem of anti-Semitism in Britain. None of us are Jewish or active in the unending debates on the Israeli-Palestinian question.

Our report showed a pattern of fear among a small number of British citizens – there are around 300,000 Jews in Britain, of whom about a third are observant – that is not acceptable in a modern democracy. Synagogues attacked. Jewish schoolboys jostled on public transportation. Rabbis punched and knifed. British Jews feeling compelled to raise millions to provide private security for their weddings and community events. On campuses, militant anti-Jewish students fueled by Islamist or far-left hate seeking to prevent Jewish students from expressing their opinions.

More worrisome was what we described as anti-Jewish discourse, a mood and tone whenever Jews are discussed, whether in the media, at universities, among the liberal media elite or at dinner parties of modish London. To express any support for Israel or any feeling for the right of a Jewish state to exist produces denunciation, even contempt.

Our report sent a shock wave through the British government. Tony Blair called us in and told his staff to fan out throughout government departments and produce answers to the problems we outlined. To Britain's credit, the Blair administration produced a formal government response setting out tough new guidelines for the police to investigate anti-Semitic attacks and for universities to stop anti-Jewish ideology from taking root on campuses. Britain's Foreign Office has been told to protest to Arab states that allow anti-Jewish broadcasts.

We made clear that criticism of actions of Israeli politicians was not off-limits. On the contrary, we noted that some of the strongest criticisms of Israeli policy come from Israeli campuses, journalists and political activists, and from the Jewish intellectual elite of many countries. American universities have provided a base for Noam Chomsky and the late Edward Said, among others, to launch campaigns of criticism against Israel, and the bulk of the West's university intelligentsia remains hostile to the Jewish state.

Tony Blair's successor as British prime minister, Gordon Brown, recently said in London that he stood with Israel "in bad times as well as good times," and one of the remarkable turnarounds of the new Labor leadership that governs Britain is a strong support for Israel and its commitment to combating anti-Semitism. The problem is worse in other European countries. The Polish politician, Maciej Marian Giertych, recently published a pamphlet under the auspices of the European Parliament that attacked Jews. No action has been taken against him. France and Germany have seen anti-Jewish attacks. Some references to Jews in the Lithuanian press do not bear translating.

Europe is reawakening its old demons, but today there is a difference.

Europe is reawakening its old demons, but today there is a difference. The old anti-Semitism and anti-Zionism have morphed into something more dangerous. Anti-Semitism today is officially sanctioned state ideology and is being turned into a mobilizing and organizing force to recruit thousands in a new crusade – the word is chosen deliberately – to eradicate Jewishness from the region whence it came and to weaken and undermine all the humanist values of rule of law, tolerance and respect for core rights such as free expression that Jews have fought for over time.

The president of Iran is the most odious example of this new state-sanctioned anti-Semitism. But from the Egyptian Writers Union to the notorious anti-Jewish articles in the charters of Hamas and Hezbollah, hatred of Jews is an integral element of a new ideology rising to prominence in many regions of the world.

Democracies always take their time, often too much time, to recognize and face a totalitarian threat when it is posed in ideological terms. In prewar Europe, conservatives were soft on right-wing ideologies because they were seen as being anti-communist and anti-labor. In postwar Europe, socialists were soft on the Soviet Union because the communists appeared to challenge capitalism and imperialism. Today there is still denial about the universal ideology of the new anti-Semitism. It has power and reach, and it enters into the soft underbelly of the Western mind-set that does not like Jews or what Israel does to defend its right to exist.

A counterattack is being organized. My own House of Commons has led the way with its report. The 47-nation Council of Europe, on which I sit as a British representative, has launched a lengthy inquiry into combating anti-Semitism in Europe. The European Union has produced a directive outlawing Internet hate speech originating within its jurisdiction.

We are at the beginning of a long intellectual and ideological struggle. It is not about Jews or Israel. It is about everything democrats have long fought for: the truth without fear, no matter one's religion or political beliefs. The new anti-Semitism threatens all of humanity. The Jew-haters must not pass.

The writer is a Labor member of the British House of Commons and has served as Britain's Europe minister.

Daddy, Don't Leave Us
Mind Over Milkshakes
Love the Convert
In the Shadow of David and Goliath
Comments