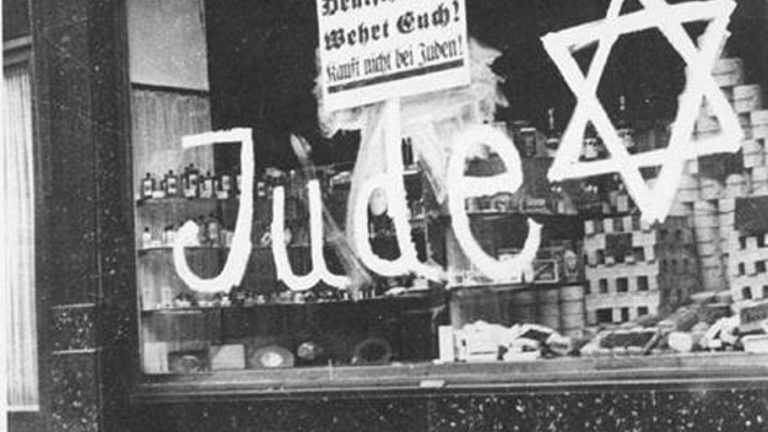 Echoes of the April 1, 1933 boycott continue to linger today.

April 1 is one of the most haunting dates in Jewish history, though it’s seldom remembered today. On this day in 1933, the newly-elected Nazi party in Germany instituted a boycott of all Jewish businesses in Germany. The boycott lasted only a day and wasn’t terribly effective, but it normalized a feeling of mistrust and hatred of Jews that continues to reverberate even today.

The Nazis had been in power for a couple of months and global newspapers kept running highly critical articles, pointing out their racism, their contempt for disabled people and minorities, and their hostility towards other nations. The Nazis’ reaction was a familiar one: to blame “fake news” for the negative coverage. Specifically, they blamed Jews who, they claimed, controlled international newspapers and media coverage.

As the morning of April 1, 1933 dawned, signs appeared on commercial streets throughout Germany, urging Germans to boycott Jewish stores and offices. Police officers stood guard to block some shoppers from entering businesses they deemed Jewish-owned. As an economic blow, the boycott was not terribly effective. April 1 was a Saturday, and many Jewish-owned businesses were shut while their owners celebrated Shabbat. Some stores and offices that did stay open still saw customers, as shoppers ignored the boycott warnings. 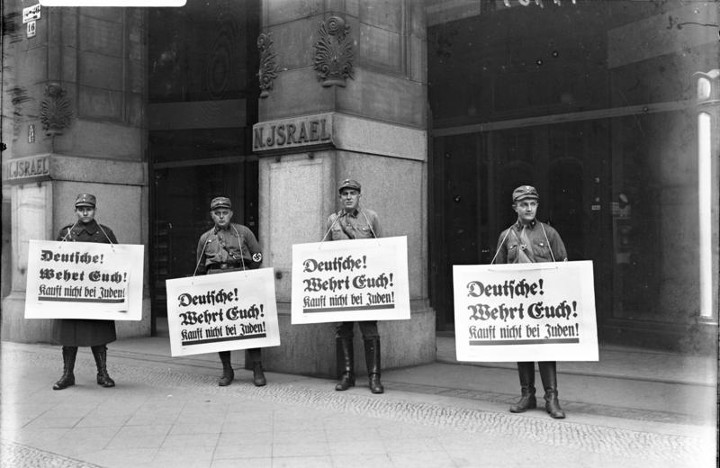 The value in the boycott went far beyond the actual shoppers. Propaganda Minister Joseph Goebbels staged a massive rally celebrating the boycott, ominously asserting that Germany’s Jews had an obligation to stop their Jewish brethren abroad from criticizing Hitler and the Nazi regime. If not, Goebbels promised, then German Jews were face reprisals at home.

This hysterical rant was watched live by thousands and was carried by every single radio station across Germany. It was followed swiftly by more sanctions. The following week, Jews and other non-Aryans were barred from public employment: Jewish teachers, university professors and civil servants lost their jobs. Two years later, the Nuremberg Laws stripped Jews of most of their political rights, denied them citizenship, and forbade marriage and relationships between Jews and Germans. It wasn’t only Germany that saw boycotts against Jews: in 1937, Poland’s Prime Minister Felicjan Slawoj Skladkowski threw his weight behind a boycott of Jewish businesses, encouraging Poles not to patronize Jewish stores or offices. 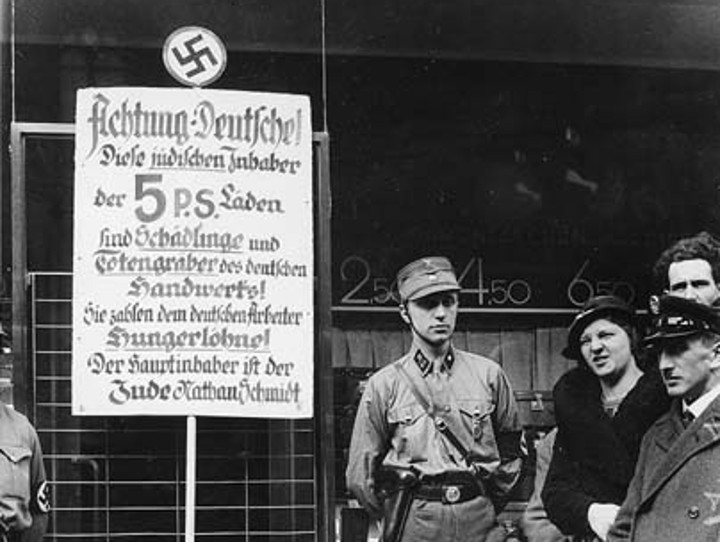 None of these events happened in isolation. Calling a one-day boycott against Jewish stores might have seemed like a small step at the time but it made the exclusion of Jews from the civil service seem more plausible. That in turn helped change public sentiment, regarding Jews as alien and other, dangerous people who require special restrictive policies to contain. With each new demonization, Jews were seen as more and more evil, living outside the bounds of mainstream society.

86 years after the original Nazi boycott, calls to boycott Jews and the Jewish state abound – often demonizing Jews and creating hate as a result.

On too many college campuses, calls for BDS (boycott, divest and sanction) against Israel help create a toxic environment in which all Jews are targeted. In Northeastern University near Boston, for instance, pro-Palestinian student activists moved beyond their self-stated goals of boycotting the Jewish state and veered into outright anti-Jewish hate, disrupting a Holocaust Remembrance Day event in 2011 and yelling insults at the participants. The following year, the campus was vandalized with anti-Semitic messages during the annual “Israel Apartheid Week” on campus, and a plaque and tree honoring a Jewish donor to the university were defaced. Targeting Israel for sanction normalized hatred of and hostility towards Jews in general.

At the City University of New York, anti-Israel rallies ostensibly focused on boycotting the Jewish state in 2016 degenerated into mobs shouting threats including “Jews out of CUNY” and anti-Jewish slurs. One administrator noted they’d “never seen anything like this before.”

At least two universities have formally acknowledged that calls to boycott the Jewish state veer into hostility towards Jews. In 2016, University College London and the University of Central Lancashire, both in the UK, suspended their annual “Apartheid Week” events because the hateful rhetoric around them violated British laws against anti-Semitism. The links between boycotting Israel and anti-Jewish feelings seem clear: a 2017 report by the ADL found an 89% increase in anti-Semitic harassment and vandalism on campuses where BDS is most active.

Calls for boycotting the Jewish state are proliferating outside of college campuses as well, normalizing the feeling that Jews are different and somehow bad. In February 2019, the television show Good Morning Britain issued a Twitter poll saying “There are calls for Britain to boycott this year’s Eurovision Song Contest in Tel Aviv, over Israel’s human rights record. Do you agree? #100DaysToEurovision”. Critics quickly pointed out that no other country is singled out for this sort of opprobrium and delegitimization.. (They didn’t issue a Tweet about the repressive state of Qatar hosting the World Cup, for instance.) The station took down their poll the following day, but not before a disturbing trend became clear: nearly half of the thousands of voters backed the station’s calls to boycott Israel’s Eurovision broadcast.

Later that month, the Spanish film director Julio Perez del Camp, winning the 2019 Goya Award for best documentary film, used his acceptance speech to single out the Jewish state. “No to Israel and the Eurovision, long live the fight of the Palestinian people” he declared to a national television audience. A few days later, the Green Party in the Netherlands became the first major political party in Europe to make boycotting Israel an official party platform. The party, which holds 14 seats in the Dutch Parliament, embraced a policy of boycotting Israeli products, divesting companies from Israeli investments and sanctioning the Jewish state.

It’s impossible to quantify how much these calls to single out the one Jewish country for sanctions and boycotts change the way people view individual Jews. History is a guide, however, showing us that boycotting some Jews can lead to hatred and violence. This April 1, 86 years after the original Nazi boycott of Jewish businesses, it’s time to say no to boycotting and demonizing the Jewish state.