The Miracle of the Red Sea in Our Lives 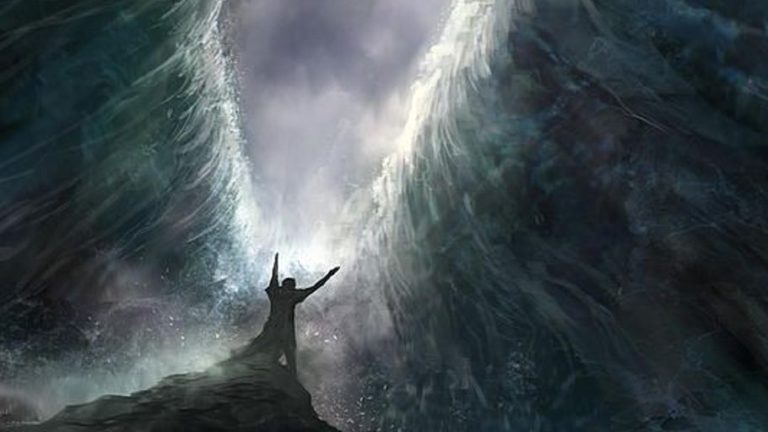 How God lets us know that the events of our lives are not haphazard coincidence.

It is one of the most dramatic stories in the entire Torah. It is the conclusion of the Exodus story and the reason why Passover is celebrated not just on the day our ancestors left Egypt on the 15th of Nisan but also a week later coinciding with the miraculous event at the Red Sea.

We do not need Cecil B DeMille’s recreation of the scene in his classic film, The Ten Commandments to be awed by the incredible display of divine intervention and justice. The Egyptians, having been frightened by the deaths of their firstborn into granting the Hebrews freedom, changed their minds when they heard that one idol remained near the Red Sea – an idol preserved by God precisely in order to give the Egyptians a false sense of hope and to pursue the slaves they regretted freeing. It was God’s plan to have the Egyptians catch up to the Hebrews.

Escape seemed impossible. It was then that a seminal moment in Jewish history took place – a moment responsible for our miraculous survival even as it brought to an end the lives of our oppressors. The sea split for our ancestors and they crossed it on dry land. No sooner did the pursuing Egyptians follow with their horses and chariots than the waters suddenly returned to their torrential strength and drowned them.

The story is far more than simply a tale of national salvation. There is an aspect to it that our sages recognized which makes it relevant in our own lives. The way the Egyptians died reveals a system of God’s justice remarkable not only for its fairness but also clearly alerting us to divine intervention.

God could have punished the Egyptians in many different ways. But He specifically drowned the Egyptians – because of all their brutalities the most inhumane was their previous drowning of Hebrew babies.

Measure for measure, those who drowned others had to themselves be drowned. That is one of the most important messages of the splitting of the sea. In Hebrew it is referred to as midah k’neged midah – our actions are repaid in similar manner. That is how God lets us know that the events of our lives are not haphazard coincidence. What we do unto others comes back to us, either as punishment or repayment.

The Passover story itself has yet another illustration of this principle, this time for good. According to the Talmud it demonstrates how the concept of measure for measure is biblically applied for reward even as it serves for ideal retribution.

Miriam, sister of Moses, deserves special recognition for the role she played in saving the life of her brother. Miriam couldn’t leave the banks of the Nile after her mother left her brother floating in a basket. She did not know what she could possibly do. She only knew she could not leave. She had to wait – perhaps there would be some way she would be able to be of help. That is what made possible her remarkable meeting with the daughter of Pharaoh, her advice to have the baby nursed by a Hebrew midwife, and the subsequent story of Moses being saved and then raised in the palace.

It was not until many years later that there was a measure for measure sequel. Miriam was smitten with leprosy during the journey of the Jews in the desert. Instead of moving on, the entire camp of Israel waited until Miriam again became ritually pure. God himself, the Divine presence, the ark of the covenant, the priests, the Levites, the Israelites, and the seven clouds of glory all waited for Miriam—a rather impressive waiting list. Why? As fitting reward for the time that Miriam waited. And while that good deed took no more than an hour, repayment lasted for seven days because measure for measure for good rather than as punishment always exceeds in great measure the action warranting compensation.

History has many messages. The past has much to teach us. But what Judaism is most anxious for us to be sensitive to is the profound recognition that in due time the Hamans who plot to hang Mordechai are themselves hung on those very gallows. The Egyptians didn’t just die; they drowned, in order for us not to miss the link between crime and punishment.

The measure for measure concept is all relevant in our own lives as well. I have witnessed many times how “what goes around comes around.” I have seen divine payback – not just cruelty being punished with cruelty but with the same “packaging,” with similarities so eerily similar they couldn’t possibly be coincidence. I have observed acts of kindness and goodness finding reward after time in ways that clearly reference them.

Is it possible that upon reflection you too might find a sequel to the story of the Red Sea in your own life as well?