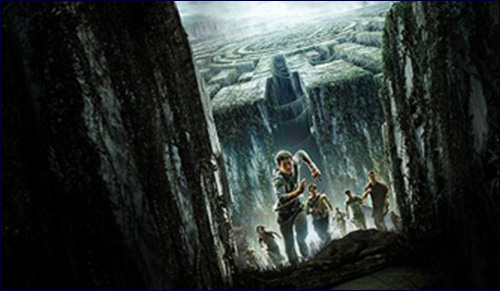 The maze is like Yom Kippur. It prepares you for what lies ahead.

Watching The Maze Runner actually made me appreciate Yom Kippur.

Yom Kippur is scary. It’s inconvenient. It takes up like a whole day, and we can’t even eat. There are all these extra rules, there’s a massive machzor of 900 pages, only half of which are in English, and it’s not even easy English. What the heck is “splendor”? Can I put it in my coffee?

I was thinking, maybe we should just stay home this year. Lay low, wait until God’s wrath blows over.

Then I watched The Maze Runner.

The Maze Runner is another one of those movies that are based on the first book of a best-selling science fiction series in which teenagers have to do something they don’t want to do, and are sullen about it. That’s not the fiction part. The fiction part is that there’s a maze with giant spiders.

Basically, it’s about a bunch of boys who live in something called “The Glade,” which sounds like an air freshener, but is actually a clearing in the center of a huge maze.

(There are no girls in The Glade. Probably because of the spiders.)

The maze is made up of 100-foot high concrete walls, and it’s one of those round mazes where the START is at the center. Did you ever do one of those mazes in an activity book or a magazine, and you wondered, “Yes, but in what real world situation would somebody have to navigate a maze like this? What real life skill is this teaching me? The start is at the middle of the maze, but how did this guy get to the middle of the maze in the first place? And doesn’t he have GPS?”

Actually, the Gladers have no idea how they got there. They’re just making the best of it. They have even created a society, featuring huts, a garden, and even some goats.

And everyone has a job. There is no unemployment in The Glade. There are the farmers, the builders, the town bully, the exposition guy, and the runners. Yes, running isn’t just something people do in the mornings before work. It’s an actual job.

See, every morning the door to the maze opens, and it’s the runners’ job to scoot around and explore the maze, and then come back and draw it from memory, right down to any weird markings they find on the walls. This isn’t easy, because every night the doors close, and the maze changes. Noisily.

“But where do babies come from?” you ask.

Once a month, an elevator comes up out of the ground in the center of The Glade containing another boy, along with some supplies. The boy remembers nothing about how he got into the elevator – he just wakes up during the trip, and proceeds to freak out all the way to the top. I’m guessing that at one point someone woke up in this elevator with no memory, surrounded by the goats. Or did the goats come up in the elevator instead of kids some months, with no memory of before? I don’t know.

Our movie begins with the arrival of a particular boy named Thomas. It turns out that there’s something special about Thomas. We’re told, “You are not like the others. You’re curious.”

Thanks. That makes him special. The entire audience is curious.

And curious he is. He isn’t even there 24 hours before he starts causing trouble. He runs into the maze, he kills a spider, and a girl shows up who knows his name. And every time Thomas accomplishes anything, the maze counters by making the situation worse for everyone.

His opposition comes from Gally, the resident naysayer. Gally is also the leader of the builders, and he doesn’t want to escape The Glade, apparently. He’s content to spend the remainder of his days building sukkahs. Gally continuously points out that every time Thomas makes progress, the maze punches back. He wants everyone to stop asking questions and upsetting the delicate balance of what they have there.

The movie, essentially, asks the question: Is it better to do what’s convenient, or what’s necessary? And what if what’s convenient is also the option that comes with fewer immediate risks?

Gally would rather keep to the status quo than risk making things worse trying to make things better. To him, the maze is just a wall keeping them in. There is no escape. But Thomas asks, “Why did they make it a maze if we aren’t supposed to run it? Why not just make walls?”

I was in a maze once. It was made out of corn, though, and it wasn’t that dangerous. Unless you count carbs. But all these mysteries, I knew going in. “Who built the maze?” “Why did they build the maze?” “How did I get here?” “What are these huge spiders?” Also, corn mazes don’t constantly shift and grow new walls, unless you move through them really slowly. But my point is that I’m not still in there.

You might be content to stay in the situation you’re in now – to continue doing what you’re doing. Things are what they are, let’s make the best of it. But running through the maze, despite the hazards, is your only hope for helping you recapture what you had before – for turning back the clock. That’s Yom Kippur.

Sometimes things have to get more difficult before they get better. In fact, as we find out during the huge information dump at the end of the movie, the maze is actually there to help them – to strengthen them for what’s coming. (I don’t actually know what’s coming. I didn’t read the book, I watched the movie.) They find out that they were human lab rats, and the maze was preparing them for something bigger.

So in fact, it’s like school. As my name implies, I teach high school English, by which I mean that I attempt to teach teenage boys who are convinced that they will never need what I’m teaching them based on the fact that they haven’t needed it up until now. They don’t want me to teach anything.

“Then how will they do the work?” you ask.

It’s okay, they don’t want to do that either.

They don’t want to learn. Learning is work, and the further we get into the year, the harder the work gets, until we’re at the end of the year and every teacher is giving finals at the same time, and if the kids fail the tests, there are repercussions.

So they don’t want to learn. They’re happy knowing nothing, living in a society comprised entirely of boys and being sheltered from the outside world by walls that open at only certain times of the day. But we all know have to get through school. The only way out of school is to pass the classes, and the only way to do that is to do the work. Otherwise you’re there forever. Like me.

And in the movie as well running the maze is not only the way out, but it actually makes them stronger and prepares them for what’s coming.

The maze is what they have to get through to get to adulthood.

Which brings us back to Yom Kippur. Nothing about Yom Kippur seems convenient. It’s like the maze. There’s no food in there, there’s a sea of strange markings you don’t understand, and you have to wear your running shoes. And occasionally, you hear weird noises.

The 900-page machzor alone is a maze. You have to map it beforehand, or you’ll be lost.

Is Yom Kippur a wall we run into every year, where everything comes to a stop? Should we just sit back and avoid it? Or is it a test that we have to go through that will ultimately make us stronger and reset our past mistakes so that everything is forgotten?

Yom Kippur is a gift. It’s our salvation. It’s the day the doors of heaven open, and we have to plunge through them in our sneakers before the doors close again.

The Jazz Singer, Yom Kippur & the History of Film

The Kosher Kritic: War for the Planet of the Apes
The Blue Beyond
Great Place to Live
Is Eating Supposed To Be Spiritual?
Comments
MOST POPULAR IN Jewlarious
Our privacy policy