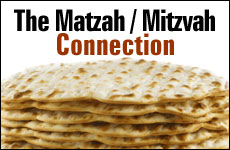 What does matzah tell us about being a Jew?

Everyone knows, of course, that matzah is unleavened bread, and that its opposite is chametz, that which is leavened, or rises We are extremely zealous, thoroughly cleansing and scouring our homes, to eradicate all traces of chametz in our possession before the onset of Passover .

But what is the actual difference in the process by which we bake bread – pure chametz – and the process by which we bake matzah? The same dough can be used for both. The difference is this: In order to keep the matzah dough from fermenting , rising and leavening – and thus becoming chametz and forbidden for Passover use – the matzah dough is continuously worked, kneaded, rolled and flattened during the initial stage of the process. The bakers don’t pause even for an instant. Only by working very thoroughly in this kneading and rolling phase, and then rushing it to the ovens, do they ensure its identity as matzah. A single moment’s delay (although technically the delay could be as long as 18 minutes in urgent circumstances) could change its status from that which enables us to fulfill the mitzvah of eating matzah, to something forbidden on Passover.

The difference between matzah and chametz is, quite literally, a matter of diligence, concentration, unceasing effort, and primarily, an acute awareness of time.

Matzah is the food that represents all these qualities – of not sitting back and allowing things to run their natural course. It is the symbol of performing tasks with zeal and focus, when they need to be done and not a moment later. This characteristic, known as zerizut , alacrity, is one of the key ingredients in to living a spiritual life.

Perhaps this is what the Sages meant when they made a famous play on word. The Torah says, “ushmartem et hamatzot/Guard carefully the matzahs” (Exodus 12:17). But, say the Sages, since matzot and mitzvot in Hebrew have the identical spelling, read this as “Guard carefully the mitzvot.” The Torah is telling us in an oblique way that we should keep the mitzvot in the same way that we keep the matzot: with diligence, attention, and concentration. And just as you do not permit the matzah dough to become fermented or leavened by delaying what you must do with it, do not allow any mitzvah that comes before you to become sour and fermented through delay and procrastination.

Passover, then, is the activist festival (just ask any housewife getting her home ready for Passover). The matzah represents many things, but more than anything else, it represents diligence and zeal in the service of our Creator.

The matzah/mitzvah connection teaches something else as well. We are bidden not to just possess matzah, but to eat it. Just as we ingest the matzah making it part of our system, so too we must internalize the mitzvot that we perform, making them an integral part of us. Observing Shabbat is not merely to abstain from creative activity; it is to make Shabbat part of our selves, to realize that there is a Creator of the universe Who resides above us. Wearing tefillin is not simply to place small black boxes on our arm and forehead; it is to internalize what those black boxes contain: the Oneness of God, the requirement to serve Him with all that we are and all that we possess.

As we perform the mitzvah of eating matzah, may the equivalence of the two inspire us to absorb its various messages: greater zeal and diligence in all that we do; a deepened awareness of the significance of time; a heightened connection with God and man through more genuineness and simplicity and less pretentiousness and puffery.

May we have an internalized Passover, and not only with food.

Passover: Embracing Our Past for the Future

Passover and the Eleventh Plague
G-d Time
Shavuot is The Holiday of Cheesecake and Blintzes
What Does Kosher Mean Literally?
Comments
MOST POPULAR IN Themes
Our privacy policy