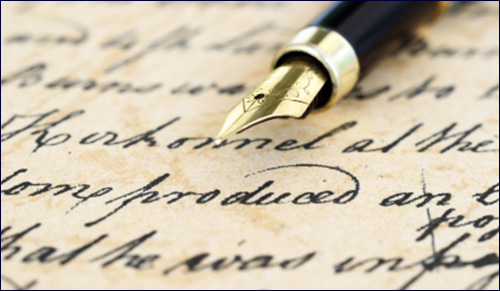 A study shows that 9 out of 10 children have never written a proper letter.

Fräulein Felice! I answer one of your letters, then lie in bed in apparent calm, but my heart beats through my entire body and is conscious only of you. I belong to you and that is not strong enough.

This is an excerpt of a letter written by the Jewish Franz Kafka to the love of his life, his fiancée, Felice Bauer with whom he tragically parted, as he was ill with tuberculosis This particular letter, one of many, was written on November 11, 1912.

"Millennials" have one mission in life: to shorten.

Let’s flash forward 100 years and translate in digital-speak: URMG4EVA, Franz (“You are my girl forever” for those who don’t read “Text” and think a raspberry is a fruit.)

Clean. Simple. No annoying adjectives, punctuation... words. Of course, if you’re a romantic, you could always print it out to show your grandkids; that is unless it accidentally winds up in your Spam folder.

Now, this is not just some rant from those of us who long for the days when women wore white gloves to pour a proper Lipton’s. Nor is it the end of civilization. It is, however, a serious downturn in what passes for culture, drama, history … and yes, our human and personal legacy.

Today, in our attention deficit digital world 80 million "Millennials" have a mission: to shorten. Who has time to text a whole word or think of more than three adjectives beyond: “Really!” “Awesome,” and “Amazing. Totally!”

True, e-mail is a marvel hurling bits of sparkless, soulless binary code around the world in an instant. It can also disappear in an instant into the ether … or to 1,500,000 other people with whom you unfortunately share a last name and middle initial.

But a letter with the feel of the pen scratching against paper, the smell of ink, the distinctive hand-writing is a creative endeavor, whether it’s a simple “thanks for being there … you were a joy,” a bar mitzvah letter from Uncle Avram in Tel Aviv, or a missive from a soldier fighting terrorism, in fear and longing for connection. The letter opens windows, and not the kind sold by Microsoft.

This is the stuff you put in that shoebox for safe keeping; the stuff, battered and yellowed, that you take out during the joys and the hard times; and what you grab when the oven blows up, so that your descendants will know and feel who you are; and who they are.

Picture it. A wife during war, waiting to hear from her husband or son who is fighting in some dank hole thousands of miles away. There she is, waiting for her lifeline; waiting for the post daily for news, any news. And there are the soldiers recounting, Jewish and otherwise … some saying goodbye.

[Excerpted]My very dear Sarah: My love for you is deathless, it binds me with mighty cables that nothing but Omnipotence could break; Never forget how much I love you, and when my last breath escapes me on the battle field, it will whisper your name. If there be a soft breeze upon your cheek, it shall be my breath, my spirit passing by.

Sullivan Ballou was killed a week later at the first Battle of Bull Run, July 21, 1861.

There are the letters that have informed the world and supported We Jews.

On August 17, 1790, Moses Seixas, warden of the Hebrew Congregation of Newport, Rhode Island, penned an epistle to George Washington. His letter expressed the Jewish community’s esteem for the first President Washington expressed its pleasure that the God of Israel, who had protected King David, had also protected General Washington. While the rest of world Jewry lived under despotic rule, as American citizens members of the congregation were part of a great experiment: to ensure their “invaluable rights as free citizens.”

President Washington replied with these immortal words: that are the foundation stone of U.S. religious freedom. “May the Children of the Stock of Abraham, who dwell in this land, continue to merit and enjoy the good will of the other Inhabitants; while everyone shall sit under his own vine and fig tree, and there shall be none to make him afraid.” He signed it simply “G. Washington.”

True, these days spreading the word doesn’t require the pony express. It would go viral in an instant. But the letters, written in their own hand can’t be captured in a tweet any more than those I’ve sent and received from loved ones, now gone, or those written by pen pals that have lasted through marriages, births, wars … until death.

Audrey Sims of Australia, 83, and her pen pal Norma Frati, 87, of Texas have written more than 3,000 letters to one another since 1939. Over the course of 74 years, their letters chronicled their lives, the wars, and their friendship. Last August, the two lifelong pals met for the first time at the Corpus Christi International Airport. When asked by a reporter how she felt about the meeting, Frati, tears rolling, said, “a little overwhelmed.” As always, the two have continued their correspondence.

But, I wonder what will be the legacy of the digital letter-writing age? In a 2009 poll by World Vision, only nine out of ten youngsters leave school having ever written a proper letter, yet half are busy texting weekly. Worse, some schools are no longer required to teach cursive writing!

Will audiences line up to see a titled SWAKU911, perhaps a new Adam Sandler film? Will generations to come download the "Collected Tweets of Ehud Havazelet” on to their e-reader. Future literary archivists will need to hack through hard drives and Smartphones to document the lives and thoughts of their subjects. Then, who among us has saved all that in a corrugated ribboned box?

And will this generation be the last to write letters crafted by hand with writing that carries emotions rather than emoticons?

Perhaps my dear JYAs (Jewish Young Adults), the next time you’re sitting in Hojos, give it a try. And I promise, you will feel the joy and the sounds of scratching pen onto paper … and the beauty of choosing intimacy over expediency.

Vegetarian and Normal
Why Are The Prayers Of Yom Kipur So Repetetive?
Ha'azinu 5783: A Time for Unity!
Twisted Thinking
Comments