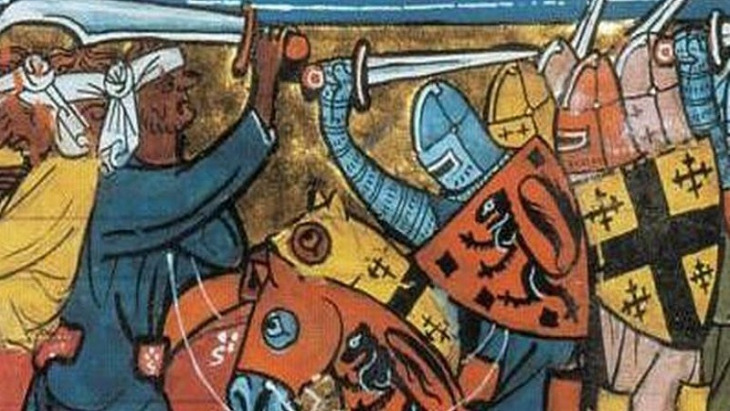 900 years later, a woman’s story as a convert persecuted by the Crusaders still endures.

Three broken and fragmented documents from the early 1100s are all that remain of the tragic story of a woman from an aristocratic family who chose Judaism, married into a prominent Rabbinic family in Narbonne, and then fled from vicious antisemitic violence to Egypt. 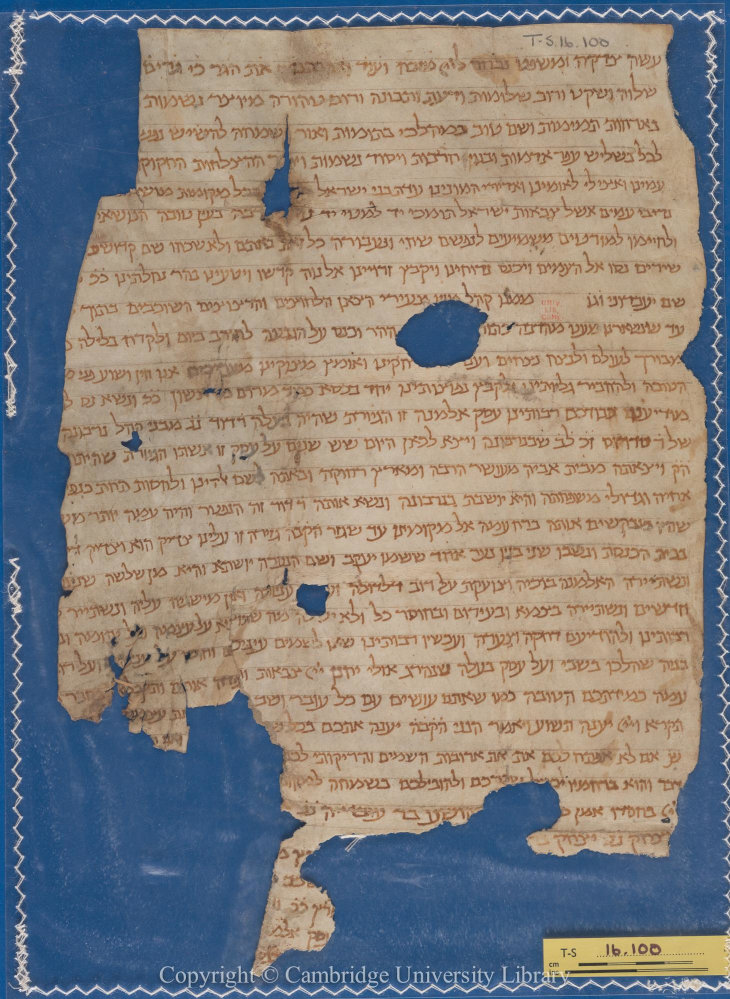 Held in the remarkable Cairo Geniza collection of Cambridge University, the first letter was transcribed and published in 1931 by the pioneering scholar Jacob Mann (1888-1940), and described how this woman – she is strangely never named – left her wealthy Christian family (probably living in the northwestern region of Normandy) and became a convert to Judaism. She settled in the large Jewish community of Narbonne in the south of France, where she met her husband David, a member of the prominent Todros family, and had three children. Her brothers and others pursued her there, so the young family left the city. This was likely in the fateful summer of 1096. 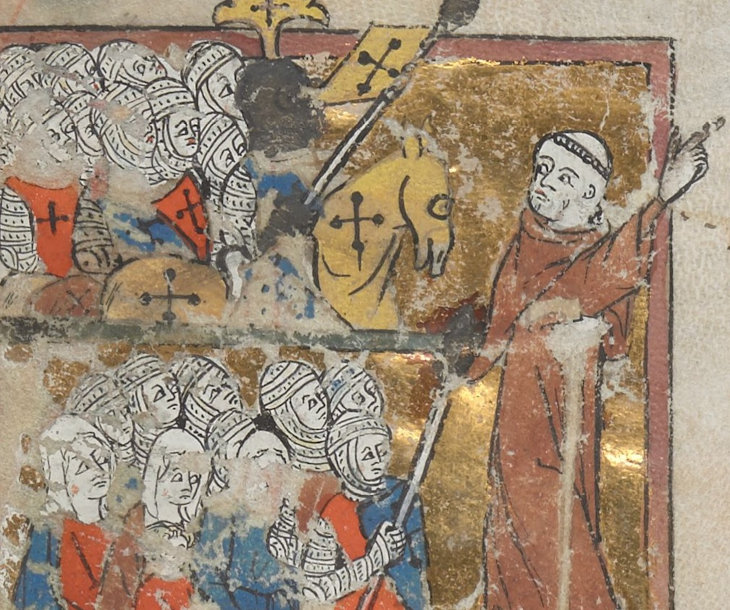 Beginning in May of that year, a horrific new series of persecutions were unleashed on the Jews of Ashkenazic lands. For months, inspired by the call of Pope Urban II to impose Christian rule on the Holy Land, nobles and peasants alike were planning to make the long march to the land of Israel to defeat the “infidels.” During the fateful summer of 1096, a group of frenzied Crusaders made a deathly calculation: why should they endure the arduous journey across land and sea to Israel, when there were unbelievers in their own midst, that is, the Jews?

The resultant massacres, particularly in the Rhineland, were among the worst that the Jews had endured since the Bar Kochba rebellion a thousand years earlier. In some cases, faced with the choice of baptism or death, whole communities elected to take their own lives rather than renounce their ancestral faith. The experience of the Crusades left a painful, permanent scar in Ashkenazic memory, and the events of that terrible season are marked by the reading of the Av HaRachamim prayer every Sabbath.

David was murdered, and his children were kidnapped, presumably baptized and never seen again. Our heroine was spared.

The first document, known formally as T-S 16.100, relates that the violence caught up with the Todros family. It seems that David and two of the children – a son named Jacob and a three-year old girl named Justa – took refuge in the synagogue. David was murdered, and his children were kidnapped, presumably baptized and never seen again. Our heroine was spared, possibly because she was pregnant, but she and her infant son were left penniless. The letter, signed by one Yehoshuah ben Ovadyia and two men both named Isaac, described her distressing story as a formal request for financial support.

Professor Normal Golb (1928-2020), a renowned Geniza scholar from the University of Chicago, examined the letter and determined that Professor Mann had transcribed one key word incorrectly. An unfortunate hole in the parchment partially obliterates the name of the place where David was murdered, and perhaps consulting the distribution of Crusader attacks on Ashkenazic communities, Mann identified it as Anjou, a puzzlingly distant location from Narbonne in the south. Professor Golb’s close examination suggested that the site was actually the much smaller Monieux. This conclusion pushed the extent of known anti-Jewish Crusader violence into a region where it was previously unknown, a revelation so significant that an otherwise tiny scholarly advance made page four of the New York Times on December 24, 1966. 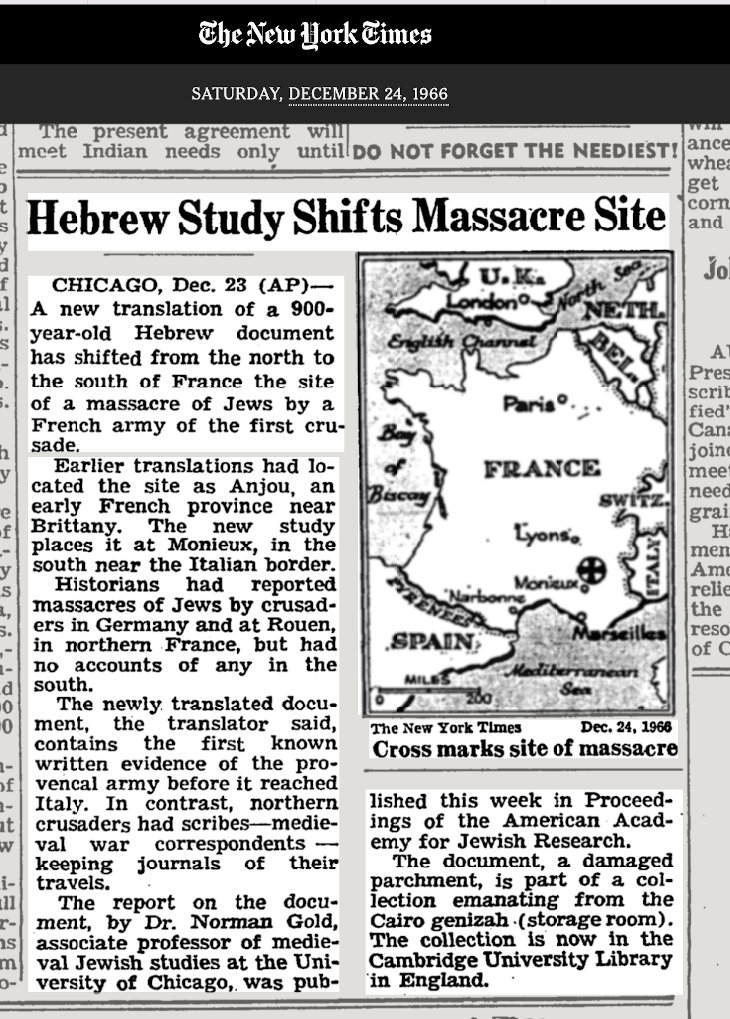 The brief yet tragic account of this unnamed woman and her suffering during the Crusades, revived nine hundred years after the attacks, inspired two moving works of fiction: Sybilla, a play by Brian Allison (1988) and The Convert, a Flemish novel first published by Belgian author Stefan Hertmans that, in a 2019 English translation, was a finalist for the National Jewish Book Award.

The tiny settlement of Monieux, which did support a Jewish community in the middle ages, suddenly found itself the object of unwelcome attention as the site of an otherwise unknown medieval pogrom. When Geniza scholar Ben Outhwaite noted that more than half of the Wikipedia page for this otherwise innocent town was devoted to the massacre, he declared it “an historical libel against this remote and predominantly peaceful corner of France.” Writing on the Cambridge University Library website in July 2020, he related the more complete story of our heroine from Narbonne. 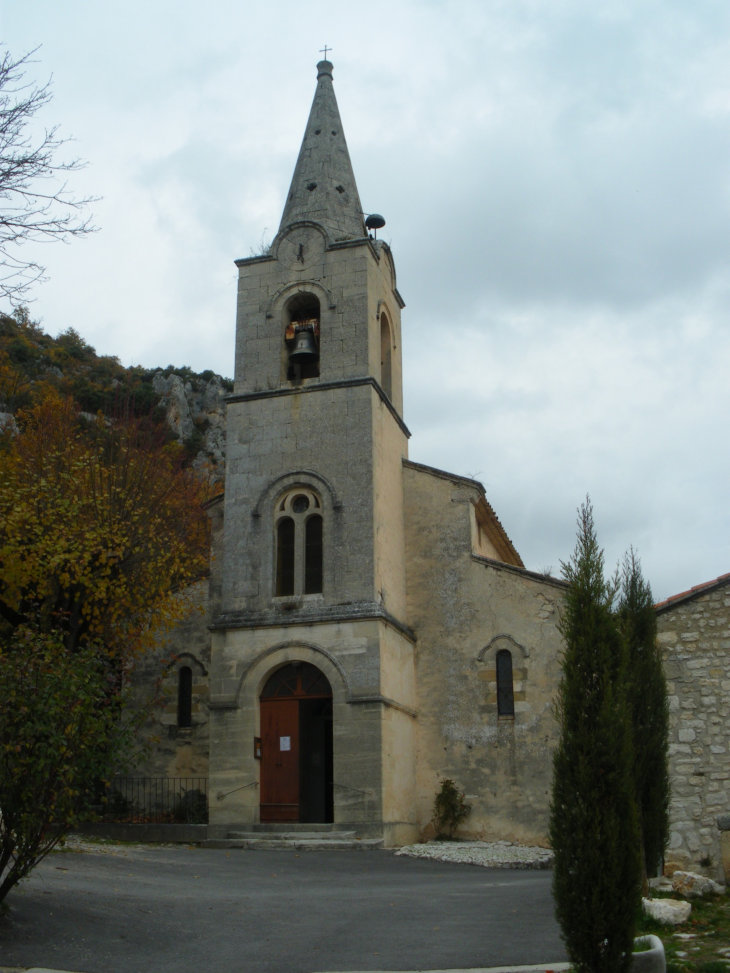 The Crusader-era Church of St Pierre in Monieux, France via Wikimedia Commons

Dr. Outhwaite, head of the Geniza Research Unit, was aware of a major piece of the puzzle that even Professor Golb did not learn for some twenty years. Edna Engel and Yosef Yahalom, two scholars of the Hebrew University, published studies of the Letter of the Convert that conclusively demonstrated that the handwriting was identical to at least two other fragments in the Geniza collection. Not only were they written by the same hand, they apparently dealt with the same person, our convert from Narbonne!

These two scraps of parchment, although even more badly damaged than the original Letter of the Convert, described a woman who fled her vengeful family to northern Spain, where she lost her husband to violence. The poor condition of the fragments make it difficult to piece together the chronology of events, but it seems that she herself narrowly missed execution, possibly because of her Christian origins. She was rather to be burned at the stake as a heretic, but just as the Jewish community was charged to bring a shroud to wrap her body before the lighting of the pyre, several Jews put together a bribe of thirty-five dinars of silver for the priests, and she was released. She fled to the refuge city of Nájera, where she struggled to raise funds to repay those individuals who had paid the blood money that spared her life.

Where did all this happen? Drs. Engel and Yahalom agreed that Professor Mann’s original association of the violence with Anjou was incorrect, but they also took issue with Professor Golb’s identification of Monieux, which was to the west of Narbonne. They argued that a far more likely candidate was the village of Muño, to the east of Narbonne across the Pyrenees, and very close to Nájera. While a definite conclusion is impossible, a consensus of historians is forming around Muño, as described in Dr. Outhwaite’s research. And what of our woman from Narbonne? The second fragments describe how she makes her way to Cairo, where she gives birth to a daughter. A refugee from the Crusades, she is supported by the community, presumably to the end of her days. The precious letters of introduction that told her story were consigned to the Geniza of the Ben Ezra synagogue, where they remained for 900 years until their publication in 1931.

History of the Swastika: 6 Facts

When England Expelled the Jews

The Tragic History of the Jews of Spain

Napoleon and the Jews

Jamaica, Jews and Christopher Columbus: The Fascinating History of Jews in Jamaica

Defiance: The Astonishing Shofar Blowing During the Spanish Inquisition
The 21st President of the United States: Failure or Inspiration?
Hiding Their Jewishness
The Jewish Pope: Following the Questions Home
Comments
MOST POPULAR IN History
Our privacy policy
Aish.com Is Looking for Great Writers