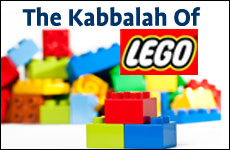 My son’s decision to move from Playmobil to Lego is a metaphor for our society. Really.

I live and work in the heart of New York City, but -- believe it or not -- I occasionally catch a glimpse of an endangered species. I'm referring, of course, to young married couples. Even if they come to the synagogue only on the High Holidays, I'm still thrilled to meet these rare birds.

In New York, I occasionally catch a glimpse of an endangered species -- young married couples.

And then I say something that pretty much guarantees I won't see these couples again for another year: “So . . . isn't it time?” The wife blushes. The husband cringes. One of them blurts out a well-rehearsed response: “Rabbi, we'd love to have kids -- someday. But right now we're not ready.”

That scenario plays itself out all over the world every day. An entire generation of Jewish grandmothers-in-waiting is praying impatiently for a little bundle of joy (or two or three) to spoil and fuss over.

But their daughters and sons aren't cooperating. Today’s leading demographers note that in Western world, young men and women are doing everything in their prime reproductive years except reproduce.

The “not ready” alibi does indeed have its merits, given the cost and responsibility that comes with parenthood. However, I’ve noticed that, the longer couples wait, the more reasons they can come up with for waiting.

In my new book The Case for Children: Why Parenthood Makes Your World Better I set out to explore the overwhelming benefits that parenthood brings to individuals and society.

Having personally suffered countless sleepless nights and 3:00 a.m. feedings (not to mention trying to coordinate car pooling and daily commutes) I could just as easily have written a different book altogether, making the case against having kids. I get that. The facts are: children are expensive, time consuming and physically, emotionally and psychologically draining,

However, they are also so much more.

For me, one of the most beautiful concepts the Hebrew Bible gave the world was the notion of God as a parent, not just a power. God chose Abraham to be the founder of a new faith not because of his great military prowess or his wealth or his gifts as a public speaker. Rather, God declares, “I have chosen him so that he will teach his children and his household after him to keep the way of the Lord, doing what is right and just.”

Abraham and Sarah were special in God's eyes because they embraced the responsibilities of parenthood. Sarah and Abraham had children very late in life. In fact, Sarah laughed off the idea that she could conceive at her advanced age. Yet faced with God's plan for her, she welcomed the awesome and unexpected opportunity to do God's will without knowing how this miraculous unexpected situation would work out.

Remember: Abraham and Sarah had no retirement plan or day-care arrangements or line of credit. Yet they stepped out in faith and were rewarded beyond measure.

Our relationships with our pets or even our friends or colleagues simply do not have the incomparable status that parenthood bestows. Ultimately, only the parent-child relationship approximates the sacred.

To illustrate, let me tell you a story about my firstborn.

At 5:30 one morning, my son Mendel woke me up with some earth-shattering news. “Daddy,” Mendel loudly declared, “I have been thinking about something, and I have come to a decision! I would no longer like you to buy me Playmobil! From now on I would only like you to buy me Lego!”

Then after a few minutes of (guilty) pondering, I found myself moved by my son's accidental profundity. Having spent hours on my hands and knees playing with my children, I knew the difference between the two popular toys.

Playmobil toys are beautiful and intricate but also lifeless and static. The most work you have to do with Playmobil is open the box.

Lego demands creativity and artistry. Lego is like life.

But when you open a Lego box, that's when the “work” really begins. You draw a plan, put the bricks on top of each other, tear them down, redo your plan, and then rebuild. Lego demands creativity and artistry. Lego is like life.

So I went into Mendel's room and told him that, yes, I'd start buying him Lego instead.

To me, this is the perfect metaphor to describe where we are as a society. It's time to stop playing and start building. It’s time to welcome new life.

Among the many benefits of being a parent, I love the fact that I now see the world anew, something I never experienced before fatherhood. Today I view almost everything through the eyes of a dad.

Take the New York Marathon. Each year my children and I watch the runners come down Bedford Avenue in Brooklyn. (And every year, I announce that next year I will run the marathon. And every year, I don't.) 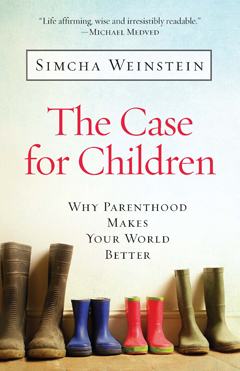 When you're sitting in a more-or-less comfortable chair on the sidelines, running looks easy. Yet we all know it isn't.

To run the marathon, you'd need to train and prepare. In fact, to finish fairly respectably, you have to alter your whole way of daily living and endure a lot of pain and inconvenience. Yet imagine the rush when you cross that finish line!

Parenthood is the greatest experience the world has to offer. My advice: don't turn it down just because it seems too difficult. When you finally hold your newborn baby in your arms, as I have, you may wonder why you ever waited so long.

The Case for Children is available on Amazon.com here.

Don’t Ask Your Elderly Parent This!

Are Jewish Stereotypes Funny? Part 3
Should I Break Up, Get Engaged or Keep Dating?
Time Is Your Precious Commodity
A Constant World in Flux
Comments
MOST POPULAR IN Jewlarious
Our privacy policy