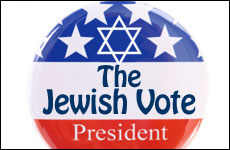 How the Presidential candidates could win the Jewish vote.

Jewlarious Satire – Pollsters are now saying the Presidential election is so close, either candidate could win and, of course, go on to disappoint us. This makes it all the more important that Romney and Obama do as much as possible to attract various blocs of voters, such as, oh, as one example, the Jews. That could make the vital difference between a fan of Aretha Franklin or Perry Como being in the White House for the next four years. With that in mind, I spoke with political expert Murray Dutter, who made the following suggestions for each candidate.

Some people claim that Mitt Romney shelters his money from tax bites through offshore accounts, primarily in the Cayman Islands. If he wants to impress the Jews, however, he needs to start moving his money again, way offshore, to Jerusalem. The folks famous for, “Let my people go!” – will surely respond to “Let my cash grow!”

To create a bond with Jewish voters, Romney should point out similarities between Mormonism and Judaism.

Romney has become painfully aware of the fact that words matter. So, he needs to clarify his previous remarks disparaging the 47% of Americans who receive government support, pay no taxes and probably won’t be voting for him. He should say that it’s not that he cares about them less; it’s simply that he cares about the Chosen People more.

Another language-related initiative deals with his name. Obviously, “Mitt” is not very Jewish and may be perceived as somewhat strange or off-putting. But he can offset that by asking Jews to think of “Mitt” as an acronym for “My Israeli Tallis Twinkles.”

Mitt should by all mean make it understood and appreciated that, like the Jews, he is very much pro-business. In fact, if you rearrange the letters of his last name, they spell, “R MONEY.” Now invest some of that R MONEY in some Israel Bonds, and we’re talking!

Jews don’t generally get tattoos. But Mormons could. As a gesture of friendship with the Jews, as well as an acknowledgment of their rich culture, Romney might consider getting a series of tattoos highlighting great scenes from the Yiddish theater. Recommended plays: Der Blutiger Kontrakt, Dos Antlofene Meydel, and, of course, Fin Shmendrik Biz Ben Ami.

Mitt should immediately begin growing his sideburns longer and develop them into peyos. And would it kill him to occasionally be seen out and about in one of those cool long black coats and that super-nifty fur-covered box-like hat thingies? You know – when in Rome…

All work and no play make Mitt a dull boy. Therefore, he might consider starting a bowling team with his close personal friends, Senators Joe Lieberman and Dianne Feinstein. Loser treats for matzoh brei!

Mormons, of course, are forbidden from drinking alcoholic beverages. But, as anyone who’s ever tasted Manishevitz wine knows, it’s pretty hard to detect much alcohol. So, as a gesture of support to the Tribe, and at a risk of alienating his fellow Mormons, Mitt should raise a Manishevitz toast to the Jews. L’chaim! (Note: practice saying it first.)

We already know Barack can sing, thanks to his occasional, impromptu bursts of song. But our Commander in Chief is not one to do things half way. Therefore, it would not be very difficult for him to put together his own a capella musical group – Barack and the Soulful Shleppers. Top that, Mitt!

Barack should think big. He shouldn’t want to just love the Jews himself; he should get the whole world to love them. To do so, he need only start a major U.N. initiative titled, Once You Love the Jews, You’ll Never Get the Blues.

Those lapel flag pins the President wears on his suit have become a little trite and boring. Obama could breathe some fresh, Judaic air into them by re-doing them as: tiny Israeli flags, bagels or Stars of David, the words “Good Shabbos.”

For centuries, U.S. Presidents have been starting their speeches with the phrase, “My fellow Americans.” Obama could change all that by simply beginning his speeches with, “Shalom Aleichem.” When it comes to Israel, Barack may not yet fully walk the walk, but by taking this suggestion, he at least could start talking the talk.

The Presidential Seal on the President’s podium – a quite impressive, great-looking eagle, has stood the test of time. But as Bob Dylan sang, “The times they are a-changin’.” That Seal isn’t bringing in any cash or promoting anything. Obama should choose, instead, to use that space to promote Jewish business. First suggestion: The Great Seal of Bubbie’s Pickles.

This next initiative will be barely noticeable to most Americans, but American Jews and Jews the world over will notice and appreciate mezuzahs on all the White House doors, as well as on the entrances to Air Force One. Now that’d be a Jew-friendly President!

“I know it’s only Klezmer music, but I like it!”

There’ve been many musical artists in concert at the White House over the years, from Pablo Casals to Willie Nelson. A Klezmer band appearance, however, has been long overdue and Barack could make it happen. At long last, the delightful sounds of 15th Century Eastern Europe could be echoing through the White House halls. To paraphrase the Rolling Stones, “I know it’s only Klezmer music, but I like it!”

What’s the one vital element missing from the White House? If you answered, “a Jewish film festival,” you and political expert Murray Dutter are thinking along the same lines. And what a wealth of resources for this wonderful cinema sensation –Woody Allen, Dustin Hoffman, Kirk Douglas, Groucho Marx, Albert Brooks. For crying out loud, you’d think the Jews invented Hollywood!

If we’re all part of the Judeo-Christian heritage, why is it that American employers and schools only let folks off for the Christian holidays? Obama could easily change all that. Every Jewish holiday could become a national holiday, too. So, where will you be spending your next Simchas Torah vacation?

Four words: White House kosher chef. Sometimes, the best ideas are the simplest and shortest. No longer will Prime Minister Netanyahu be forced to send out for takeout food when dining at the White House. If Obama puts this into play, one day you may even be able to say to someone, “Until you’ve tried White House brisket, you really haven’t lived!”

Did Jew Know?
Should I Break Up, Get Engaged or Keep Dating?
Time Is Your Precious Commodity
A Constant World in Flux
Comments
MOST POPULAR IN Jewlarious
Our privacy policy