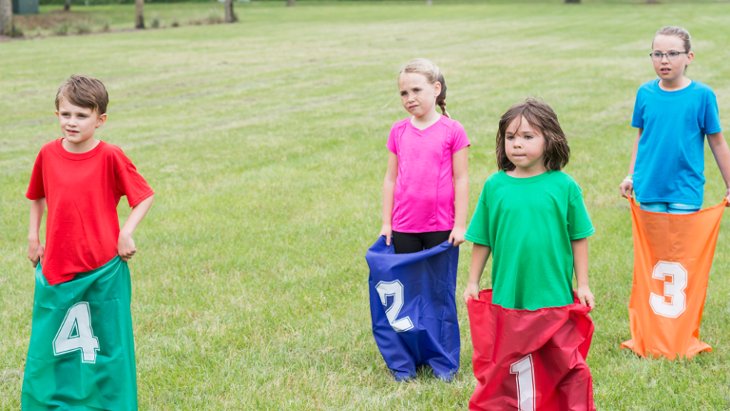 Here’s what we did in camp this week, in case your kid insists he did “nothing.”

Not all Jewish kids go to sleepaway camp. Some of them go to day camp. And for some reason day camp seems to involve a lot more paperwork. Case in point, weekly newsletters. In order to streamline efforts, I have formulated this generic Jewish day camp newsletter that can be used universally.

Wow! Another exciting week at Camp Gan Kol Your Mother! The camp spirit here is so palpable you can smell it. Well, except that another war broke out between the colors. Here are some of the things we did in camp this week, in case you have the kind of child who insists he did “nothing”, despite the fact that he clearly did something because he’s wet, missing one shoe, and covered in rubber cement.

Official camp T-Shirts will be distributed before Trip Day. All campers must wear their T-shirts on trip days, so they can remember at a glance which camp they came in with. Also, we need to be able to make sure we don’t accidentally bring back kids that didn’t come with the camp.

But they’re not just for trips! From now on, every Tuesday is T-shirt Tuesday! If we see you wearing your T-shirt, you’ll be given a raffle ticket worth less than a cent, which you will then proceed to put in the laundry! With your T-shirt!

We learned the camp song this week (Finally, right? It was raining.) and the kids are singing it all the time now! We think it’s only a matter of time before we regret teaching it to them. Maybe we should have kept the song on a need-to-know basis.

The leagues are finally up and running! And batting, and fielding, and sitting on a bus – all the regular things that baseball players do.

In general, league play will happen for whatever sports we deem necessary. This week, the leagues played baseball, football, soccer, and a game called “Let’s See Who Could Stop Making Noise on the Bus for the Longest.” This is much better than the professional leagues, who only ever play the same one sport every single day. That’s fun. Though the money probably makes up for it.

After many weeks of delayed starts, the canteen is officially open for business! But they’re out of everything.

This week we started making wallets out of duct tape. The kids are very excited, because they think the last step is that we’re going to fill them with money. We haven’t finished them yet, though. If you don’t know what you’re doing and you just throw it together, you can end up accidentally taping your money into your wallet. And then you’ll never get it out. They make that tape strong enough to tie down ducts. Or possibly ducks. Depends who you ask.

On Wednesday, the counselors had some convoluted fight in front of the entire camp while all the kids sat there awkwardly. And before we even finished this fight, all the older kids were already yelling “Color war! Color War!” because that’s what the kids always assume when things go wrong in camp. The head counselor could keel over with a heart attack, and the kids would just keep yelling, “Color War! Color War!”

Why do these colors keep fighting! It seems like they just fought last year! Your mother always said that red and blue clash, but she never said it involved competitive bentching.

For Monday, please wear something that is the same color as the team that you’re on. We’re going to pretend not to notice that we gave one team a nice, easy-to-wear color, like blue or black, and the other is like yellow or red or some other color that your kid has absolutely zero clothes of. Last year, half the kids on Team Yellow showed up in raincoats.

We don’t know yet who’s going to win color war, but it’s going to be by two points.

On Tuesday morning, we left bright and early (mostly early) to go to Boing-Boing – an indoor trampoline park with one of the scariest waivers we’ve ever read. Everyone had a great time, and the place did not at all smell like feet.

After that, the whole camp headed over to the local park to play an exciting game of staff baseball that just wouldn’t stop until it suddenly occurred to everyone that if the staff was playing baseball, who was watching the kids?

1. This Thursday, we will be going to the water park!

5. Kids will be getting pre-packed lunches (don’t worry, they’re not packed yet), but everyone should bring their own snacks and drinks so we don’t spend the entire trip pouring drinks.

6. Try to send 2 bottles of water per kid (recommended), depending on the size of your bottles and your kid, and depending on how much water park water he plans on swallowing (not recommended).

7. We recommend that you label everything your kid might take off, especially the T-shirt, because there might be other people in the camp that have that same Camp T-shirt.

This year, our camp will be having a dinner, because it’s a nice fundraiser, and if schools can do it, why can’t we? The dinner will feature a choir consisting of the kids competitively singing Color War songs for several hours while the adults try to have conversations.

Also on display at the dinner will be our lost and found. (Yes, we have a lost and found. It’s a lot like your school’s lost and found, but with way more socks.) Anything not claimed by the end of the evening will be considered public domain. So don’t be surprised if next year’s arts and crafts are primarily sock-puppet based.

Behind the PTA
Saadiah Gaon, Rashi and Maimonides: How Three Rabbis Revolutionized Judaism
King Sennacherib and the Siege of Lachish
Three Small and Easy Changes to Add Positivity in Your Home
Comments