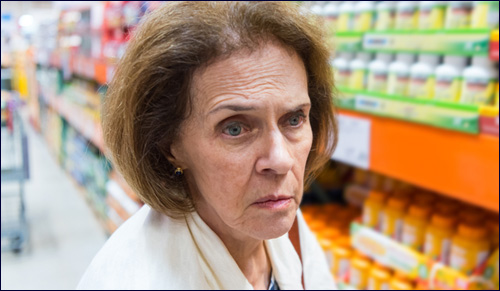 A heated argument at my local grocer reminded me how easy it is to completely lose it.

I go to my corner market so frequently that I joke that the women at the cash registers are my true BFF’s! I’ve witnessed many unpleasant interactions – and even been on the receiving end of some – but this morning took the cake.

Although I didn’t hear the whole argument (I wasn’t eavesdropping; I was at the other register!), the ostensible problem seemed to be that the customer was overcharged last week. For an item that was apparently supposed to cost 79 cents (not sure if it was per piece or per pound), this irate (and she was very angry) woman was charged 89 cents. Like I said, I’m not sure if it was per pound or per item but let’s imagine the former. If she bought 5 pounds, we’re speaking of 50 cents. If she bought 10 pounds, we’re discussing a dollar.

Except they weren’t discussing. Temperatures were rising and the customer insisted on seeing the manager while simultaneously accusing the cashier of deliberately overcharging her and hinting at stealing. As the decibel level increased, other customers started to get involved – defending the employee and verbally attacking the customer. Tensions escalated.

The woman attacked back and the other customers responded in kind, explicitly telling her what little patience she possessed and detailing her poor character. I kept my head down and couldn’t wait to leave.

But I couldn’t stop thinking about it. I tried to be empathic; perhaps the woman lived at a level of poverty where that hypothetical $1.00 made a difference. I know that would be the “judge favorably” position. But from the way she handled it, that didn’t seem enough of an explanation.

We all have bad days. We all (most of us anyway) have financial challenges. And most of us can add in many other stressors as well. But none of that seems sufficient excuse for the level of vitriol expressed in my local market.

It’s always painful to see someone lose control, to see adults resort to name-calling and verbal “shoving”. This incident felt like it took place in my backyard and while I respect the person who took the cashier’s side for the impulse that led him to leap to her defense, the situation could have been better diffused if he would have kept his mouth shut. Even the much-maligned cashier was begging him to be quiet.

The whole mess reinforced for me the idea that we are all living with this bare veneer of civilization, how easy it is to lose our cool when we feel wronged or provoked – and therefore how important it is to work on ourselves to maintain patience and perspective and self-control.

None of those are our natural state. They all require effort to achieve and maintain. Although the provocation in this situation seemed relatively minor and the customer’s fuse relatively short, we all have the potential to behave like our lower selves instead of our higher ones. We need to be on our guard. We need to keep working on ourselves to integrate and internalize good character traits and values, ideas and habits that will enable us to keep ourselves calm even when provoked – and frequently keep our mouths shut.

I was only picking up a few items for dinner; who knew I would end up picking up so much more?