The I of the Beholder 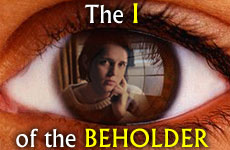 How can we get free of the petty tyrannies of our own female vanity?

The feminist Germaine Greer once described an unpleasant lunch hour she'd had in a trendy Manhattan restaurant. For three decades a figure of some renown and influence in the American women's movement, Ms. Greer was finding it difficult that afternoon to get her waiter's attention.

As she sat there impatiently trying to catch his eye – any waiter's eye – she noticed that at various tables around the room, a number of other women, younger than she, weren't having the same problem. In fact, at the next table over, not only was a waiter responding diligently to a good-looking diner's every request, but to make matters worse, the young woman in question was accompanied for lunch by an enthralled middle-aged man, someone just about Germaine Greer's own age.

That's when it hit her, said Greer: she'd become invisible.

Surely that's the not only time a waiter's unresponsiveness has triggered an existential crisis of the highest order: a woman's encounter with her own nothingness that not even transcendental meditation can provide. For a female who has absorbed – from childhood and adolescence on – the notion that to get a man's attention is to have evidence that she exists, watching her beauty ebb and fade is to preside helplessly over the disappearance of her very own self. To be invisible to the male gaze is to not be there at all.

Eventually the bathroom mirror will start sending daily bulletins about our unbelievable transformation into our grandparents.

If the universal human need to be there – in other words, to be recognized, noticed, taken seriously – is intertwined primarily in a woman's mind and heart with her power to attract, she'll be getting some uncomfortable wake-up calls somewhere along the line. As we all know, and try heroically to deny, we have every reason to trust that our bodies will get weaker and uglier as time goes by. We can successfully forestall the onset of this pre-programmed deterioration with exercise and cosmetic surgery and nutrition and makeup, but eventually the bathroom mirror will start sending daily bulletins about our unbelievable transformation into our grandparents.

As the saying goes, inside every old person is a young one wondering what happened; throughout history, women have sought to be beautiful and have appraised their value accordingly. Yet in our times, there's something particularly obsessive and twisted about how these natural inclinations manifest themselves. The increasingly widespread occurrence among middle-aged women of eating disorders – pity my generation! – gives eloquent expression to the war against one's own self that can occur when the powerful twin longings, for love and for transcendence, are channeled primarily into the quest to preserve one's youth and beauty. If that pursuit takes place in the absence of any other equally authentic and viable philosophy of self, our body's condition and appearance become the most tangible measure of our worth.

For better and for worse, I'm no exception. My own childhood was populated by female authority figures who seemed to have something other than their figures in mind, but I myself just will not go gently into that good night. As a baby-boomer, I insist, absolutely insist, that time does not go by, and I'd rather die than appear in the clothes my grandmother wore at my age.

How can we get free of the petty tyrannies of our own female vanity? Short of reincarnation as a man, one way out would be a nun-like withdrawal from the world, whereby we'd be free to cultivate our inner lives without outside interference. Another would be to adopt the Saudi-Arabian-style obliteration of one's female form and individuality altogether.

My identity is not equal to my reflection in a three-way mirror.

Another would be to live in such a way that our self-presentation conveys this idea to ourselves and others: My identity is not equal to my reflection in a three-way mirror.

What's lost when one can pass unnoticed? The truest joys are those which, by nature, require privacy to blossom, and our most enduring accomplishments those which go unseen by others.

And to the extent that we struggle to hold the world's gaze, to that extent will our bathroom mirrors increasingly chastise us, day by day, for neglecting our inner lives, invisible but to ourselves and God.

Feminism and Judaism
Olivia Newton John’s Grandfather was a Nobel-Prize Winning Jewish Physicist
Don’t Believe in Other Gods Versus God is One
Seeing Without Eyes
Comments
MOST POPULAR IN Current Issues
Our privacy policy
Aish.com Is Looking for Great Writers