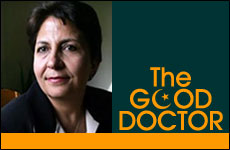 Dr. Wafa Sultan recently became a legend. Her interviews with al-Jazeera,
in which she censured Islam and the way in which it inflicts ignorance and alienation on its followers, have made her into a phenomenon: an educated Muslim that demands that the Arab world take its head out of the sand.


In a recent interview , the only time I see tears creeping into Dr. Sultan's eyes is when she speaks of her family in a small village in western Syria, two or three hours from northern Beirut. In their eyes, she is a shameful stain on the family, which includes seven brothers and three sisters.

Her eldest brother claims that she received a million dollars from the Jews in order to denounce Islam. Her mother, age 74, refuses to speak to her on the telephone.

"I know I'm hurting them," she said. "They feel ashamed. I can understand that." Her sister in Qatar, who is married to a Palestinian, is more supportive. They speak once a week. Dr. Sultan spoke of how hard it was to be able to speak with friends in Syria, but not with her mother and brother.

Wafa lost her family, but won the world's acclaim.

Wafa lost her family, but won the world's acclaim, with a series of interviews, the most famous with al-Jazeera, in which she attacked fanatic Islam, and the alienation, misery and struggle against advancement that it imposes on its followers.

She is a short woman, but hugely endowed with vision and courage. Warm and free of pretense, she remains aware of the importance of her message. "I think that in 300 years, the name Wafa Sultan will be remembered as someone who helped Islam come out of the Middle Ages," she told Ynet.

Her own departure from the Middle Ages was triggered by the murder of her lecturer at the Halab Medical School in 1979. Members of the Muslim Brotherhood murdered eye doctor Prof. Yusef al Yusef because he was an Alawi (like the family of Syrian President Bashar Assad), yelling 'Allah Akbar', shooting into the air, and driving off on a motorcycle.

Dr. Sultan called this the turning point in her life. She started questioning her life and belief system, with her husband, whom she had met at the time. She stopped fasting and praying. Her husband wandered from embassy to embassy trying to get a visa. It took them ten years to get out of Syria.

When they left Syria, he was an agricultural engineer and she was a psychiatrist. When they arrived in the US in 1989 with two children (a third has been born since then) and 100 dollars, they didn't speak the language. They lived for a few months with friends and worked in every job available.

Sultan told of working as a cashier, gardening, doing everything necessary to survive. It took them years to get on their feet financially, when her engineer husband opened a garage. "Better a mechanic in America than an engineer in Syria," she said.

The garage wasn't the Sultans' only American venture. Within a week of arriving in America, Sultan started writing. She wrote articles for Arab-language newspapers in the Los Angeles area. Every editor stopped her at a certain point and wouldn't publish her thoughts, she said.

Eventually, a few weeks before September 11th, a friend suggested that she start her own website. Thus, annaqed.com was born: Meaning "the critic" in Arabic, it contains articles in Arabic and English.

Wafa received several warning phone calls from CAIR (Council on American-Islamic Relations). At first, she says, they were able to restrain her to a degree, but after September 11th, she knew she could not remain silent. "Today I'm a completely different person. Let them do what they want."

Wafa's website was read in the Middle East, as well. That's how she received her first appearance with al-Jazeera in July 2005. "They knew the influence of my articles and website...I believe they didn't think I'd be able to defend my views on live television."

Unfamiliar with al-Jazeera or the show on which she was interviewed, she didn't realize that her appearance would be as part of a debate. She was asked if there is a relationship between Islam and terror and then verbally attacked; despite being "ambushed", she was able to gain the upper hand and was invited for a second interview, with a more senior commentator.

The second interview became an internet hotspot. Since its broadcast on al-Jazeera, sections were translated by MEMRI (Middle East Media Research Institute) and distributed by various internet users. Millions of surfers in the Middle East and around the world saw the interview that took place on February 21, 2006.

Dr, Sultan debated Egyptian professor of Islamic Studies Dr. Ibrahim Al-Khouli, who couldn't keep up with her, asking her again and again "so you're a heretic?" and stating that there was no point in debating with someone who insults the prophet Muhammad and the Quran.

Wafa Sultan said she has received death threats and estimates that someone will try to assassinate her, but she is not prepared to be frightened. "They weren't able to shut my mouth the first time. In February, I took them down again. They won't ever invite me again," she smiles.

Weeks after the interview, one of the announcers from the show published an article claiming that she'd been paid in order to criticize Islam. She answered him in a letter: "Your interview introduced me to the Americans and the international community. Even my neighbor didn't know who I was until you introduced us and now you blame me for being bought by the Americans?"

Since then, she has been banned by the Arab media. However, she has managed to penetrate branches within the Muslim and Arab world. Many people enter her website and send her emails, both positive and threatening. In her opinion, any positive message is a good sign.

She believes that her mission -- to "breach the walls of the prison of the Islamic world" -- is difficult, but that she has succeeded in making a crack. Now it will be easier for others to come after her, she said.

Wafa told of an email from a Moroccan mulla who said that he had bound her internet article into a book and told his 17 year old son that this was his new Quran. She receives emails from Lebanon, Jordan, Syria, Iraq, Egypt and even Saudi Arabia. She receives mails from Muslim women cheering her on. Sadly, they always use pseudonyms, because they are afraid.

"32 years of my life were stolen from me by radical Islam. Let them do what they want."

Earlier this week, she received an email from a 23 year old Syrian student who wrote that the government had blocked her website but not her emails and asked her to send them via email. "I know that I have a large influence on the Arab world," she said proudly.

When reminded that producer Theo Van Gogh was murdered in Amsterdam for similar reasons, she responded: "I lived in fear for 32 years. 32 years of my life were stolen from me by radical Islam. Let them do what they want. I think they'll succeed one day. It's no big deal."

Dr. Sultan recounts that when she lived in Syria, she was taught to hate Israel , to think of Israelis as inhuman, a different kind of creature. When she was in California with her husband, she discovered that a shoe salesman was an Israeli Jew. Hysterical, she ran out of the shop barefoot.

When her husband asked her what was wrong with her she answered that the man was her enemy and that she hated him. It was the first time she had ever met an Israeli Jew face to face. "Slowly, I learned how wrong and stupid we were. You're humans no less than us," she said.

Dr. Sultan wants to visit Israel, hopefully soon. Monday, she will meet with the Israeli consulate in Los Angeles to advance the issue. This, needless to say, will only increase the hatred towards her from the radical branches of Islam across the world.

But she clarified: "I'm proud of myself. This is my mission in life. Nothing will stop me."

Reprinted with permission from Ynetnews.com , English news and content from Israel's most-read newspaper.

Ban Ki-moon, Why Are You Silent?

4 Reasons Why the Media is Biased against Israel

Can You Pass this Israel Literacy Test?

The UN's Version of the Hanukkah Story

Who's to Blame for Gaza Civilian Deaths

Palestinian Intimidation of Journalists
Who Was Josephus? The Controversial Backstory of the Famed Historian
Should I Break Up, Get Engaged or Keep Dating?
Time Is Your Precious Commodity
Comments
MOST POPULAR IN Israel
Our privacy policy