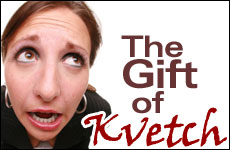 Kvetching is a necessary part of life! Here’s why…

The other day while shopping, I was “heeled,” big time, by the cart behind me driven at NASCAR speed by some 20-year-old with a T-shirt that read “CONTRACT KILLER.” Apparently he’s always on duty – even while grocery shopping.

We’re all clogged with oy veys.

It gets worse. While tending to my severely shredded heels, my cart accidentally plowed through a four foot high pyramid of creamed corn, sending cans flying from the bakery to the produce aisle. The manager kvetched (“Oh great! Now I gotta pick up this mess!”), the customers rolling in creamed corn kvetched (“Hey! I could’ve killed myself!”), and I kvetched (“How dare you let lunatics drive in here!”) One who didn’t kvetch was the Contract Killer who ran out, no doubt intent upon perfecting death-by-shopping cart.

In the midst of all the rolling and kvetching, a retro lady in a long shmatte imperiously approached me with: “Chill.”

After wondering if my State had the death penalty, I realized that little Miss Chill is way off base. Kvetching is a necessary part of life. I would argue that we actually need to kvetch.

Shmutz Removal: Face it. We’re all clogged with oy veys, “who needs this?” and “You’re all shmegegges.” Should we attempt to hold in all that fury, like shredded wheat caught under our gums, it can lead to dire consequences. We Jews would puff up like psychotic blowfish with gas. I also suspect that more than half the people on America’s Most Wanted were taught early to say: “No one likes a sad sack,” or “It is what it is,” when nebuch, their parakeets knocked against a faux wall sculpture and had to be put to sleep. Kvetching is like a mental enema. It allows us to healthily vent, clean out, then start anew with no nasty rage hangovers – or grepsing.

Creative Socializing or If You’re Kvetching and You Know it, Clap your Hands: If we’re older than the mutant meatloaf in my freezer, we know that life is filled with a few big joys and a million daily oys. While We Jews are stoic when handling the Big Things such as rescuing people from a terrorist nation, it’s the little things that make our daily lives one big meshuggoss: waxy carpet stains because little Shmooie had to blow out his Birthday candles like the Hulk, uncooperative curtain rods that give us concussions, or our husband’s insistence he knows a secret short cut from New York to Miami – through Idaho. By letting out a robust “Oy Vey! Would you believe … !” in the hair salon, gym, or elevator, you’ll suddenly hear from strangers, “You too?! MINE dreams of going to outer space – as a pilot, yet! He can’t find the Tums if they’re behind the Q-Tips, but Venus he thinks he’ll find! And another thing …” See? In five minutes we’ve made 10 BFFs, and given them the gift of the kvetch.

I gave these strangers the gift of the kvetch.

I’m OK, You’re Not: True, it may cause a hiccup in our Book of Good Deeds, but face it, other people’s kvetches, while they can’t take away our own, can be … inspiring. Of course we don’t wish evil eyes upon them but hearing other kvetches makes ours a little more bearable. If say, we’re kvetching about a piece of dirt in our raisin bread while our new elevator BFF is complaining because her 30-year-old son flunked HU (Hamburger University), who doesn’t think “Oy, I’d rather eat dirt.” Of course, in serious cases, you may evoke enough genuine sympathy to write her nudnik a recommendation, which we all know is a mitzvah, thereby canceling out our misdeed.

Catastrophe Avoidance: "With those grades, you need to go out tonight like a hole in the head.” A cruise to Alaska for a honeymoon?! What? Nightmares, I’m having.” “Oy, why don’t you button your neck, Irving, it’s 40 degrees outside!” “At first glance these may seem like nudjing, annoying, interfering kvetches, however … you would be wrong. I ask you, if your little David went out, it could be he’ll fail his math test, which means he, too, will go to HU, instead of Harvard. As for your daughter’s honeymoon? What? They never heard from glaciers, never mind brides who routinely “disappear” on boats? And should your Irving fail to button up, pneumonia is a possibility, so why risk it? See? A good kvetch can be cautionary!

We’ve Got a Right! Yes. According to the U.S. Constitution we’re entitled to life, liberty, and the pursuit of happiness. Show me one person who, after 10 years of “pursuing” an acting career and is still playing extras on The Young & Restless, who’s “happy.” He or she is, however, busily constitutionally “pursuing.” Trust me. Alan Dershowitz will not defend you because you lost the role of Yente in the Secaucus revival of “Fiddler.” He will however, defend your constitutional right to kvetch: “That vilda chaya hack only got the job through her Uncle – Steven Speilberg!” in a crowded place.

This being said, of course you can’t kvetch to all of the people all of the time! The expert kvetcher chooses her/his target and issues wisely. Timing is also crucial. We need to balance the kvetch so that it’s long enough to get results, yet short enough so they won’t run from you. Five minutes per kvetch is about right (unless you’re on the line with a telemarketer from Inidia).

I also suggest kvetches be balanced with optimism and positive reinforcement. For example, say to your Irving: “See darling … ? You buttoned up and didn’t get pneumonia?! I’m so proud.”

As for me and the supermarket? They agreed to post a cart speed limit, and for the express lane ragers their sign now says: “ABOUT 15 items.”

Now that’s what I call KPSC or Kvetching for Positive Social Change.