The European Union and the Yellow Star 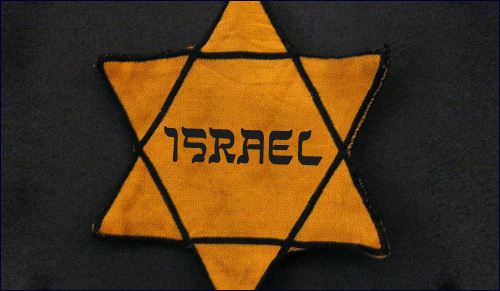 EU's edict to label products from Israel came out on the anniversary of Kristallnacht.

The coincidence of the calendar is nothing less than remarkable.

Last week, the European Union laid out new guidelines for labeling products from Israel. Farmers, vintners and manufacturers in East Jerusalem, the West Bank and the Golan Heights – even those employing Palestinian workers – must tell consumers that the products come from a “settlement” in the territories which were “illegally” captured by Israel in the 1967 Arab-Israeli war.

There are over 200 border disputes and “occupations” in the world today but the European Union decided to single out only Israel.

As Prime Minister Netanyahu pointed out, there are over 200 border disputes and “occupations” in the world today – including China, India and Turkey – but the European Union decided to single out only Israel. Only Israel needs to feel the stinging rebuke of a boycott which intends to isolate Jews and Jewish products. The date of this European Union decision? November 11. The significance? Less than a century ago, the horrors of the Holocaust began on Kristallnacht. It was then that Reinhard Heydrich, chief of the Reich Main Security Office, first recommended that Jews should wear identifying badges following the Kristallnacht pogrom of November 9 and 10, 1938 and all Jewish places of business should be identified with the word Jude prominently displayed.

Shortly after the invasion of Poland in September 1939, local German authorities began introducing mandatory wearing of badges and by the end of 1939 all Jews in the newly-acquired Polish territories were required to wear yellow armbands with a Star of David. From then on the idea spread to all territory held by the Nazis. The star was intended to humiliate Jews and to mark them out for segregation and discrimination. The policy also made it easier to identify Jews for deportation to camps.

It all began with a label, a badge, an armband – an outer sign differentiating Jews from the rest of mankind – and it made possible genocide and the extermination of 6 million victims.

It remains to be seen whether the required new labels somehow only necessary and applied for Israeli products will need to be yellow. Surely no fair-minded person, however, will fail to see the striking parallel to the previous effort to single out Jews for pernicious reasons.

It should also be highly instructive to go back in time and to remind ourselves of the original source of this particular method for singling out a specific group to be isolated, condemned, and punished. The history of the yellow armband, long before Nazi Germany applied it to the Jews, has its source in a Christian edict of anti-Semitism. It was at the Fourth Lateran Council headed by Pope Innocent III which in 1215 ruled that Jews must wear a form of distinctive garb to publicly demonstrate their inferior status – and insisted on a yellow badge, yellow being the color of urine, to serve that purpose.

It is a tragic part of the story of Christian anti-Jewish prejudice which filled the pages of the Middle Ages. And remarkably enough, during the time of Michelangelo, it was in the Vatican itself that another message about the yellow armband imposed upon Jews was secretly painted in one of the frescoes of the Sistine Chapel. At the time that Michelangelo was toiling in the Sistine, the status of Jews in the Western world was at an all-time low. The Inquisition was churning at the height of its powers, having already despoiled and expelled the Jews from Spain, Portugal and Sicily. Jewish wisdom literature was being burned in public bonfires all over Europe, and sometimes the holy rabbis and sages who taught these texts were thrown to the flames as well. In the midst of this insane wave of prejudice and hatred, Michelangelo felt the need to go against the tide.

As I point out in my book, The Sistine Secrets – co-authored with Roy Doliner – a striking example is an incredible detail that has come to light in the aftermath of the cleaning and restoration of the Sistine ceiling at the turn of this century. Near the end of his torturous years of frescoing, Michelangelo was painting right over the elevated area where the Pope would sit on his gilded throne. There he placed a portrait of Aminadab, a seemingly strange choice since Aminadab was far from a major biblical hero. On Aminadab’s upper left arm we can today see clearly revealed a bright yellow circle, a ring of cloth that has been sewn onto his garment.

This is the exact badge of shame that the Fourth Lateran Council and the Inquisition had forced upon the Jews of Europe.

Michelangelo placed this powerful illustration of anti-Semitism on Aminadab, whose name in Hebrew means “from my people, a prince.” To the Church, “a prince from the Jews” means only one person – Jesus, the prince of peace. Here, directly over the head of the Pope, the Vicar of Christ, Michelangelo pointed out exactly how the hatred and persecution of the Catholic Church was treating the very family of Jesus in his day. What he was saying in effect was that if Jesus were alive in his day, the anti-Semitism of the church at the time would have demeaned Jesus himself with the forced wearing of a yellow armband just as they did to every other Jew! How remarkable that Michelangelo’s message resonates with powerful importance in our day as well. It is Christian Europe which today seeks the favor of the Arab and Muslim world by joining in the now popular pastime of anti-Jewish measures. It believes it can assuage those dedicated to the destruction of Israel by joining with them in the infamous yellow armband tradition of singling out Jews for unequal treatment. What the European Union forgets is the Muslim mantra which doesn’t conceal its ultimate goal: “First we will eliminate the people of Saturday and then we will take care of the Sunday worshipers.”

The European Union should not only feel ashamed. They should be seriously frightened – frightened that their willingness to silence their conscience so soon after the Holocaust will be remembered not for its boycott but for its boomerang. Christian Europe will pay with its own decline for so willingly joining fanatic Muslims in their hatred for Jews and their plan for world domination.

VIDEO: This week, Europe decided to single out Israel -- among 200 countries with territorial disputes -- and label Israeli products. It was wrong when Europe targeted Jewish stores 75 years ago and it is wrong to target Jewish goods now.----> Never again. Fight anti-Israel, anti-Jewish hate. Join over 70000 people who signed PeaceNotHate.comThanks to the Jerusalem Center for Public Affairs

Posted by The Israel Project on Friday, November 13, 2015

What Are HRW Watching?