The Dangers of Being a Jew in France Today 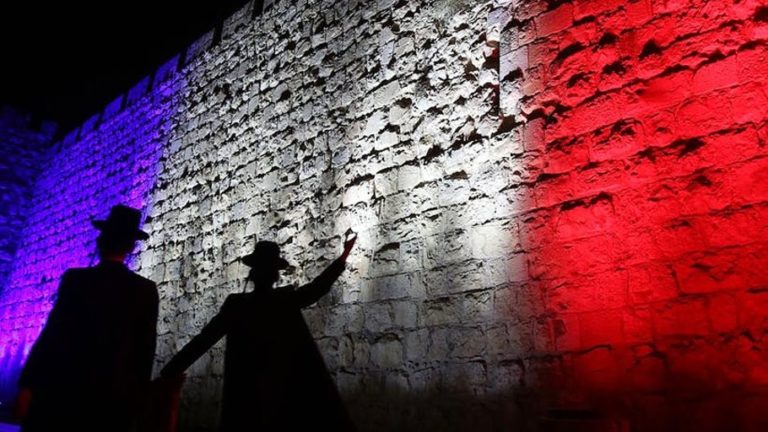 Aish.com interviews a number of Jews living in France. Their future is precarious.

That view, shared with Aish.com in a series of recent interviews with French Jews, sums up the feeling of many French Jews today. Life in France has been difficult for its 500,000-strong Jewish minority for many years, but recently things have become worse.

A string of gruesome anti-Semitic attacks and murders has French Jews on edge. Many point to the 2012 murder of three children and a teacher in front of a Jewish school in Toulouse by an Islamist fanatic as a turning point, shocking the community and making many Jews feel they’re in extreme danger. 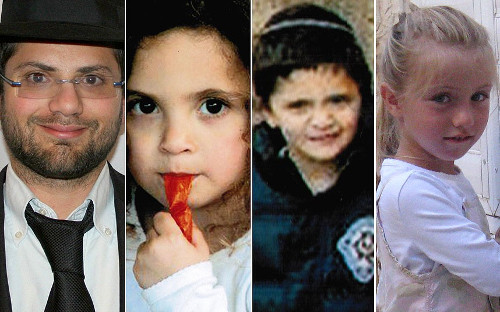 The four Jews murdered in Toulouse.

Some French Jews cite a series of marches and attacks on Jewish synagogues and property in 2014, with mobs openly shouting “death to the Jews” in the streets of Paris as a turning point. For others, it was the 2015 attack on a Paris kosher grocery store that killed four Jewish shoppers. That same year saw two large-scale terror attacks in Paris, targeting Hebdo magazine and then concert-goers and cafe patrons in central Paris. In the months following thousands of French Jews fled, moving to Israel as well as other countries such as Britain. In the past 15 years, approximately 150,000 Jews left France, most settling in Israel.

Now, two recent murders have some French Jews debating their future yet again. On April 4, 2017, Sarah Halimi, a 65-year-old Jewish grandmother and teacher, was murdered by an Islamist neighbor who broke into her apartment, beat her and threw her from her balcony. Witnesses reported hearing him shout, “I’ve killed my Jew!” after her murder.

On March 23, 2018, Mireille Knoll, an 85-year-old Holocaust survivor was murdered – beaten and her body set alight – in an anti-Semitic attack.

On Sunday Le Figaro released a manifesto signed by more than 300 French dignitaries and stars denouncing a “new anti-Semitism” marked by “Islamist radicalization”. 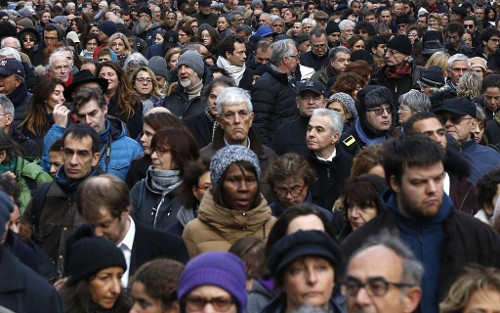 A silent march in Paris honoring Mireille Knoll, an 85-year-old Holocaust survivor who was murdered in her apartment.

“We demand that the fight against this democratic failure that is anti-Semitism becomes a national cause before it’s too late. Before France is no longer France,” the manifesto reads co-signed by a wide swath of politicians and celebrities. “In our recent history, 11 Jews have been assassinated – and some tortured – by radical Islamists because they were Jewish,” the declaration said. They also accused the media of remaining silent on the matter.

“It’s suddenly more dangerous. There have been three killings in less than one year where elderly people have been killed just because they were Jewish,” explains Robert Popoular, a distinguished physicist living in the leafy Paris suburb of Bourg-la-Reine. “These crimes aren’t motivated by greed or a desire to rob. It’s hatred against the Jews.”

Dr. Popoular, 64, would seem to be miles away – literally and figuratively – from the crime that’s ravaging some immigrant-heavy neighborhoods. His upscale suburb contains a small Jewish community, and Dr. Popoular works in a rarefied atmosphere of highly-educated scientists. Yet in recent years he’s noticed that the traumatic events targeting Jews go unremarked by his non-Jewish neighbors and colleagues. “I haven’t heard them discussing it. French people vaguely know they’re hate crimes but they don’t care,” he explains.

“You can no longer wear a kippah on the streets.”

“You can no longer wear a kippah on the streets,” says Ilan Schreiber, a Paris resident who works in the medical supply business. An Orthodox Jew, Ilan 35, is used to wearing a kippah but these days he feels the need to cover it with a hat when he’s outside or at work. “In France, it’s best not to show being Jewish outside,” he explains. The risk of attack from Muslim immigrants is just too great.

When Dr. Popoular recently visited the United States and bought t-shirts from Northwestern University Hillel, he gave them to his wife and daughter with the caveat that they never wear them outside. “If you show external signs that you’re Jewish, today it’s a provocation,” he says. “You are putting yourself at risk.”

One Jewish official voiced this fear in 2016 after a kippah-wearing teacher was attacked by an Islamist teenager wielding a machete outside of a Jewish school in the southern French city of Marseille. Zvi Ammar, head of the organized Jewish community in the city, advised Jews to hide their kippot “until better days” arrive in France. Two years later, many French Jews are still waiting – and are beginning to despair that a day when they can once again openly show their Jewishness in France will ever come.

Recently, some French Jews note a positive change in the atmosphere. Back in 2012, when the Jewish school in Toulouse was attacked, there was a feeling that this was a “Jewish problem” only, explains Ilan Schreiber. Since the large-scale attacks in Paris two years ago, he feels there is now more of an understanding of the dangers of Islamist terrorism. “French people can understand what the Jewish people are feeling.”

Judith Garmon, a 40 year old living in the Paris suburb Bonneuil-sur-Marne, concurs. The mood of Jews in France has fluctuated wildly in the past few years, she notes. Since the May 2017 election of Emmanuel Macron, many French Jews have been optimistic about the future, noting that the French Government seems to be taking anti-terrorism measures seriously. Jewish schools and synagogues are currently guarded by soldiers and vigilance for terrorist plots remains high.

These extraordinary security measures are reassuring “but at the same time it gives you the feeling of not being secure,” explains Ms. Garmon. Her four young children attend Jewish schools and she notes that seeing military personnel there sends the not-so-subtle message that Jewish children are in extreme danger.

Ironically, this wary mood in France guarding against radical Islam and terrorism has the unintended consequence of making life harder for many French Jews. Laicite, or secularism, is a core legal concept in France, ensuring the separation of church and state. As France enforces secularism ever more strongly in an attempt to stamp out Islamic fanaticism, Jewish practice has been caught up in the push to stamp out extremism.

In 2004, France banned “conspicuous” religious symbols in schools and government buildings. Designed to deter Muslim women from wearing headscarves, the law also banned Jews from wearing kippot in official buildings. A lesser-known emphasis on laicite in France has caused even more headaches for French Jews in recent years: scheduling college exams on Saturdays.

“Before, the rabbis were speaking to the universities, saying please can you make some exception,” explains Ilan Schreiber. The answer was often yes. Today that leniency is past. “If you don’t take the exam on Shabbat now, you get a zero.”

French students who move to Israel help make up an extraordinary number of Jews who are choosing to leave France for the Jewish state. Between 2014 and 2017, about 20,000 French Jews have made aliyah, or moved to Israel, most from the Paris region. By some estimates, 150,000 French Jews have left in the past 15 years.

For those who remain, an internal migration is taking place in France. Jews living in immigrant-heavy suburbs that are plagued with high crime and high levels of anti-Semitism are relocating to more secure parts of France. To get a sense of just how bad things can be in areas with large Muslim communities, some French Jews point to a 2017 book published in France by Bernard Ravet, a former principal at a prestigious high school in the southern French city of Marseille. Even though his was a state run school open to all, Mr. Ravet revealed that he routinely advised Jewish families not to send their children to his school because he could not guarantee their physical security among anti-Semitic Muslim students.

“Most of the people from our shul are living in Jerusalem now,” notes Jose Fein. His four children have also moved to the Jewish state. “Even twenty years ago my kids didn’t want to stay in France,” he remembers. “It wasn’t even a question.”

For those Jews who remain in France, the future seems precarious.

“Now all French Jews have family in Israel,” concurs Ilan Schreiber, whose sister and brother live in the Jewish state. Dr. Popoular, who describes his family as well integrated into French society, notes that his son is a successful physicist and his daughter is a lawyer, yet he doesn’t see a future for them in France. “I hope they won’t stay.” He wants them “just to be safe” and increasingly he feels that this means leaving France. 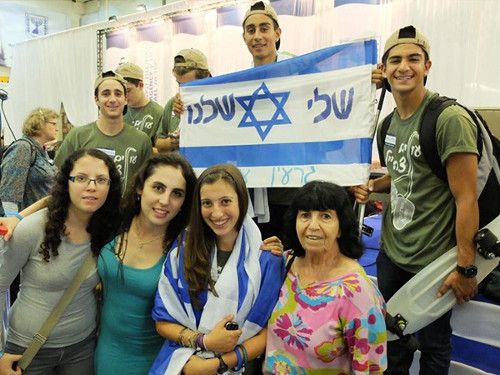 As more and more Jews move from France to Israel, the growing French community in the Jewish state exerts a pull of its own. Israel’s booming economy, good Jewish schools and strong community also present a lure to some French Jews.

For those Jews who remain in France, the future seems precarious.

“I love France, I want it to be okay here,” notes Ilan Schreiber, saying he feels French in his mindset and way of life. But if he felt his young children weren’t safe or couldn’t have a full Jewish life in France any more, he’d leave for Israel. Asked if he feels there is a future for Jews in France, Ilan notes he’s not completely sure: “It may be too late.”

The Rabbi and Katrina