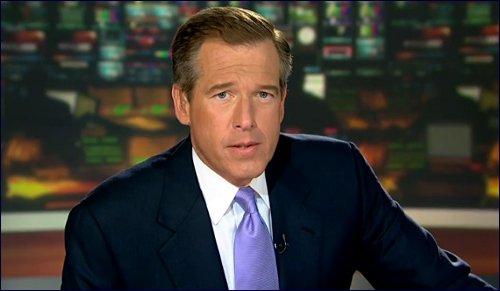 The pressures of high-stakes entertainment news.

Brian Williams, the celebrated anchor of NBC Nightly News, has retracted his claim that while reporting in Iraq his helicopter was "hit and crippled by enemy fire." Williams now says he recalled the incident incorrectly and that he'd been on a different helicopter which was not hit.

It has become painfully clear that Williams' original account was a deliberate fabrication; when you're in an aircraft struck by a rocket-propelled grenade, it’s a moment you never forget.

The Torah (Exodus 23:7) says: "Medavar sheker tirchak" – "distance yourself from falsehood." This goes beyond a simple admonition against lying. It means: Do not justify a lie that "nobody will find out." You never know when and where, but it can get you in the end.

With Brian Williams, it took 12 years till the truth was revealed – forcing Williams to now take a hiatus from his position. According to industry insiders, his career is likely finished.

Williams follows the career of his colleague, Dan Rather, who was forced to resign as anchor of the CBS Evening news after promoting a fabricated Texas Air National Guard document purporting to speak about 2004 presidential candidate George W. Bush's service record.

In today's world, as we so carefully craft our avatar for Facebook, we can each ask: Am I being truthful in my presentation?

Ultimately, am I being truthful to myself?

That's all that matters. Because in the end, all we have is our good name.

Williams is not alone in the realm of journalistic fabrication. Two months ago, Rolling Stone magazine was forced to retract its vivid description of a gang rape at the University of Virginia.

What's behind these incidents?

Journalists know that "gaining eyeballs" is the surest path to a lucrative career – and  industry awards.

When Janet Cooke wrote a Washington Post series about an 8-year-old heroin addict – the “needle marks freckling the baby-smooth skin of his thin, brown arms” – she won a Pulitzer Prize for what was later revealed to be a wholly fabricated story.

There is a danger of becoming enamored with a well-placed lie that offers the lure of riches, fame, adoration, status, influence, and money. It can all be exposed and come crashing down.

Gene Weingarten, a Pulitzer Prize-winning journalist for the Washington Post, recounts that as a “hungry young reporter in the 1970s,” he thought of himself as “an invincible crusader for truth and justice.” Now, he says, the media is in a “frantic, undignified campaign… [for] attracting more ‘eyeballs.’”

Today, the vast competition – weblogs, Twitter and a moment-by-moment news cycle – has blurred the guidelines between "news" and entertainment, to the point where USA Today introduced a plan to pay bonuses to writers based on page views.

The temptation to invent captivating news stems from a major shift in the media’s primary target group. It is no longer the general public; it is the commercial advertisers who are sold a product called “eyeballs” (that’s you and me). The more eyeballs the media provides, the more they can charge advertisers, and the greater profit they reap.

The more compelling the show, the more ad dollars pour in.

This pursuit of profit creates tremendous pressure to make the news “entertaining.” In the top-down chain of news production, publishers demand from editors an increased market share; editors, in turn, pressure reporters to make the storyline interesting. Along the way, journalistic ethics may fall by the wayside.

This helps to explains how Jayson Blair was able to systematically fabricate dozens of stories in the New York Times – inventing places, events and people who didn’t exist – before anyone caught on.

It wasn't always this way.

For decades, television news was a money-loser. The networks funded news divisions only because it was good for credibility and image. In those early days, the primary consideration was just-the-facts-journalism.

That changed in the 1970s when 60 Minutes became a ratings sensation. The CBS news division was making money for the first time ever. At that moment, network executives changed the rules: “Journalism” was no longer the goal; it was now about making money.

That’s when strange things started happening. When Dateline NBC filmed a segment about General Motors pickup trucks exploding due to poor fuel tank design, producers planted explosive devices beneath the truck and “forgot” to tell viewers it was only a dramatization. (The tip-off was that the film showed smoke coming out of the fuel tank prior to impact.)

For media consumers, the best hedge against being duped is to be aware, even skeptical, of the media's claims. Indeed, today's ubiquitous "news-o-tainment" has increased the lure of employing fiction and sensationalism to achieve one's journalistic aims

This week's scandal is a credit to the American people that they will not tolerate influencers who lie. And it is a positive sign that freedom of the press is still viewed as an important, even sacrosanct, institution.

And it proved once again the adage that "television is a medium... that is neither rare nor well done."

Objectivity and the Media: Critique #4 - The News From London

Rediscovering the Will to Win

Regine: The Holocaust Survivor Who Invented the First Disco Club
Blessing on Chewing Gum
Was Rahab a Prostitute?
Extras In Our Own Epic
Comments
MOST POPULAR IN Current Issues
Our privacy policy