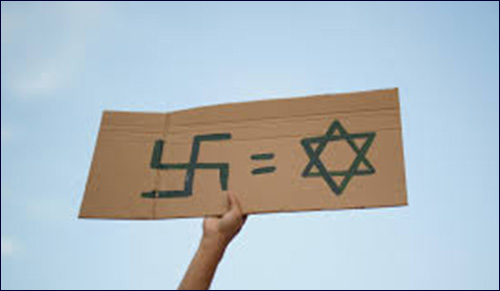 The war in Gaza has exposed many myths.

We now know the extent to which Hamas duped the world as it pleaded poverty and used the world’s aid for munitions and missiles – even as it turned its leaders in absentia into multimillionaires.

We now know how cement allowed into Gaza on the pretext that it would be used for the construction of schools and basic infrastructure was misdirected to building the most sophisticated tunnels meant for terror activities on an unimaginable and unprecedented scale.

We now know how those who speak in pious platitudes on CNN about how much they want only to ensure a good life for their children readily use them as shields and praise death and martyrdom as their noblest ideals.

But there’s one more myth which for all too long had many supporters around the world that can now no longer be sustained. The argument about the real meaning of anti-Zionism can finally be put to rest.

Many years ago there were those who already perceived the truth. When they expressed it they were or often mocked, if not vilified. One would have to be blind though, today, not to agree.

Martin Luther King was prescient in recognizing this during his lifetime. He was fearless in speaking truth to power. His words resonate all the more forcefully now in the aftermath of the world’s response to Israel’s long overdue reaction to missiles indiscriminately fired on its inhabitants:

As Stephen Harper, the first Canadian Prime Minister to address the Knesset, said bluntly and clearly in January of this past year: “Anti-Zionism is the new face of anti-Semitism.”

And Harper was criticized. The pundits repeated their mantra: Opposition to Israel isn’t opposition to Jews. Hating Israel isn’t the same as hating Jews. Just because people take issue with Israeli policies doesn’t mean that they have anything against Jewish people all over the world.

Open your eyes now and see what is happening in the supposedly civilized capitals of Europe. In France, demonstrators physically assault Jews in synagogues. Not Israelis. Not the Israeli embassy. Jews. Jews at prayer, Jews who may lean left or right with regard to their views on settlements or may disagree with Israeli policies. As long as they are Jews, they remain the enemy.

Murderous slogans dating back to the days of Hitler have been chanted at pro-Palestinian rallies in Germany. Jewish-owned shops were attacked and burned. The Israeli ambassador to Germany, Yakov Hadas-Handelsman, said: “They pursue the Jews in the streets of Berlin… as if we were in 1938.” There have been reports of protesters chanting “Jews to the gas chambers.”

We are currently experiencing an explosion of evil and violent hatred of Jews, which shocks and dismays all of us.

Dieter Graumann, president of the Central Council of Jews in Germany, said the rise in attacks was a terrifying reminder of an era that was thought to be in the distant past. “We are currently experiencing in this country an explosion of evil and violent hatred of Jews, which shocks and dismays all of us. We would never in our lives have thought it possible any more that anti-Semitic views of the nastiest and most primitive kind can be chanted on German streets.”

In Belgium, a sign at a cafe in Saint-Nicolas, a town located just east of the southern city of Liege reads: “Dogs are allowed in this establishment but Jews are not under any circumstances.” In major cities there are reports of Jewish stores being boycotted, of businesses refusing to sell to Jews.

Let us grant for a moment that there may be those who feel Arabs have legitimate grievances. Should we not wonder though why invariably disagreement with Israeli policies legitimizes calls for genocide and a renewal of Hitler’s efforts to wipe out the Jews wherever they may be?

In 2008 a State Department report already cautioned that "New forms of anti-Semitism often incorporate elements of traditional anti-Semitism. However, the distinguishing feature of the new anti-Semitism is criticism of Zionism or Israeli policy that – whether intentionally or unintentionally – has the effect of promoting prejudice against all Jews by demonizing Israel and Israelis and attributing Israel’s perceived faults to its Jewish character. This new anti-Semitism is common throughout the Middle East and in Muslim communities in Europe, but it is not confined to these populations...”

The best way to recognize the current anti-Israel hysteria for its anti-Semitic roots is by making use of Seymour Martin Lipset’s brilliant warning sometime back against “the dangerous confluence between anti-Zionism and anti-Semitism” and his recipe for recognizing the difference between them. I would urge everyone to carefully note them and then consider contemporary criticism of Israeli actions in Gaza:

By all these standards we can finally bury the myth under which Jew haters have so cleverly camouflaged their racism. When Israel is attacked by its critics simply because it refuses to commit suicide we know with certainty that they are no better than a long string of historic figures who sought nothing less than death to the Jews – and that they will most assuredly meet the same fate as all of our enemies.

For God's Sake, Wake Up

97-Year-Old Holocaust Survivor is a Viral Sensation on TikTok
The Promise Of The Land
Which Chat Are You On?: Parshas Behar/Lag Ba’Omer
Do You Like Slow-Cooked Food? Thank the Jews
Comments
MOST POPULAR IN Jewish Society
Our privacy policy