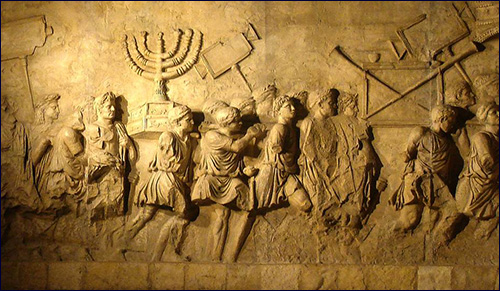 The most powerful Tisha B’Av I have ever experienced.

Last summer my husband and I took a trip to Italy. Due to business commitments we had a very specific and limited window of time available. We ended up being in Rome for Tisha B’Av, the traditional Jewish day of mourning for the destruction of the Second Temple.

Naturally, I was hesitant about spending the 9th of Av in Rome. Why had the Almighty orchestrated things so that my exciting, one-in-a-lifetime romantic trip to Italy began on a national day of fasting and mourning? Were we wrong for even attempting a trip at this particular time?

It turned out to be the most powerful Tisha B’Av I have ever experienced.

It began on the afternoon preceding the holiday with a tour of the Jewish quarter. After absorbing the information about the relationship between the Church and the Jews, the World War II round-up of the Jews from Rome (we stood on the spot where it occurred) and the 1982 terrorist attack at the Great Synagogue, I was definitely in a Tisha B’Av state of mind. Our history was coming alive.

Then came the holiday itself. At my synagogue in Los Angeles, we dim the lights for the reading of Lamentations (Eichah). At the Great Synagogue of Rome (after going through the security screening) we were all handed candles. The awesome beauty of the grand old synagogue against the flickering light of the candles created the appropriate mood. We were suspended in time and place.

Then came the chant of Lamentations, Roman Jewish style, piercing through to our core. We walked back to our hotel, overwhelmed with emotional sensation, unable to speak or fully process the experience.

This was the city with the arch of Titus depicting the Romans carrying away the precious vessels from the Temple. This was the city and nation that symbolized and embodied the catastrophe of Tisha B’Av.

The next afternoon we took a “Jewish-oriented” tour of the Coliseum. The architectural and mechanical accomplishments of the Romans gave us perspective on who our enemies were (are?) – on their intelligence, their creativity, their power (and perhaps why our patriarch Isaac wanted to give his blessing to his son Esau, the progenitor of Rome). It was a lesson available only through one of those “had to be there ” experiences!

It was very hot that July day in Rome and we had no problem feeling the prescribed discomfort of the day. When Tisha B’Av ended, we returned to the Jewish Quarter to break our fast. The Jewish Quarter has been revived and revitalized – which is exactly how we felt after our elegant Italian meal! (And did I mention the delicious bakery dessert we purchased – a mouth-watering concoction of pastry, dried fruit and nuts named Jewish pizza!)

In line with the Jewish people, after years of trials and suffering, the Jewish quarter has new life and energy. We looked around and felt the glimmerings of hope, of new beginnings. The events of the last few weeks have dampened that hope somewhat but the flames are still flickering, just like those Tisha B’Av candles. I pray that my hope wasn’t misplaced and that this mournful day does indeed become of a day of rejoicing.

Today's Ultimate Status Symbol
Why Are The Prayers Of Yom Kipur So Repetetive?
Ha'azinu 5783: A Time for Unity!
Twisted Thinking
Comments