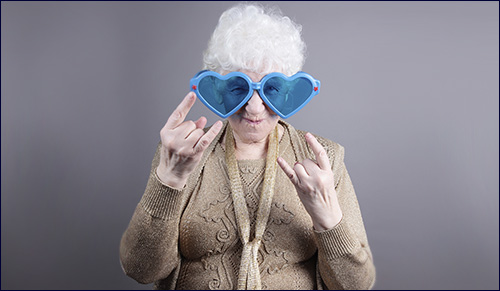 Archeologists just found a 3000 year old woman in the Negev. And her name is Sylvia.

We, at Jewlarious, just got word of a miraculous find 15 miles from the Negev: Sylvia! During a routine dig, archeologists found the woman who claimed she was 3000 years old. Actually, she said she’ll be 3000 and ½ – in October. As the best in Jewish news, we ran over and expressed what a privilege it would be if we were the first to interview her, and she agreed! So now mamalas we are over the moon to share with you part of our conversation with THE 3000 YEAR OLD JEWISH WOMAN! (OK, so we’re rounding off a little.)

JEWLARIOUS: Sylvia, why did you hide from the public all these years?

SYLVIA: I’m very health conscious. After I passed my 413th birthday, I figured “did I need the crowds? The noise? People spitting on me when they talk?” And the cake? You try blowing out 414 – including one for mazel! I would’ve lost a lung, maybe two.

SYLVIA: Vo den? Not that I want praise poo poo, but to set the record straight, even though you call it the Star of David, it should be The Star of Sylvia! Yes! I invented it. You see, back then women got rotten gifts – sticks, shovels, sand. What can I say? The men were yutzem. So one day when I was digging with mine birthday present, I found … something shiny and yellow. We knew from gold then? Today I’d be a billionaire. Anyway I bent it into a lot of little triangles, as who knew from hobbies? You could also say I invented “the hobby,” Anyway, the Jewish ladies loved them! At the time I was married to my 76th husband, David. He said it looked like a fakakta pyramid! Pui! Did I mention he was very political? Such fighting – 30 years we yelled until we finally saw the rebbe, such a brilliant man. He said: “The Lord decrees that maneth and wifeth are equalith. OK, so you Sylvia, keep your triangle and David, you make another but put it upside down.” Boom! My husband, the macher, called it The Star of David! I can still hear his hocking: “You think ‘The Star of Sylvia and David’ will go over? Feh!

JEWLARIOUS: I know the world is fascinated by your longevity. To what do you attribute your phenomenal age?

SYLVIA: Tzimmis! It’s psychological. Every day my mother would say: “So, Sylvia, what tzimmis are you going to make today?!” I thought it was mandatory. Also, I never once touched a Twinkie! It was always in and out with Kosher certified. At my age I should take a chance?

JEWLARIOUS: Over the years you’ve seen so many marvelous inventions, tell the world what in your opinion was the greatest invention?

In our original hut there were 98 people. Picture it. A hundred people running around wearing fur in 110 degrees sharing a hut. You could plotz from the shtink alone. And it traveled. Fifty miles were farshtinken – even the parts without people. We also learned the answer to our big question: If a shtink is somewhere it the desert, and no one’s there to smell it, does it shtink anyway? Oh boy! Even Jezebel had a problem getting dates. Did I have a chance? So, when our hut reached 1000 and people were chaloshing right and left, it took Chaim the Kohen to say, “Maybe we should build two huts.” The man was gifted!

JEWLARIOUS: Tell us, in the early days what did you believe about life and death.

SYLVIA: Life and death? From this, we didn't know. When someone laid down, we thought the person was taking a very long nap. We did notice the next day, the nuts and grains we left for them were still there. Eventually, our rebbe, after due consideration wondered: “Maybe they converted?” So we took their nuts and grains. They were the first leftovers.

JEWLARIOUS: In 3000 years you must have had many careers. What were some of them?

SLYVIA: Mostly slavery. I lived with my parents until I was 526 years old. They tried to teach me to be a good balaboosta. Never worked. My matzo balls came out square, and a beauty I wasn’t. But I was one great cleaner. When the Colossus of Rhodes fell, who do you think cleaned up? Marvin with whom I was keeping company, and I shlepped the pieces. If I knew then what I know now … I’d be the most famous female shlepper in history. I also made model mud castles right near the Galilee. For some reason, the next day? Poof! Gone. Just a wet spot. Some thief stole my mud castles and had the chutzpah to pay me in water. If I ever catch that gonif …! Then, during one century in England, I was a sword sharpener. As a Christian couldn’t touch metal, it was the Jews who had to take care of business. From Henry the Eighth alone I made a fortune. But let me tell you, he was a strange tipper. I was also good at writing. No one could chisel like me. Perfect slant. Let me see. Ah, much later I sold pencils in Brooklyn. One customer I’ll never forget. Mr. Cohen, a jeweler, every day would give me five cents for a pencil which was hoo ha in 1931 and he never took one. Since my pencils came with a point, one day I told him I was raising my price to eight cents. Have you see him since? I tell you, people!

JEWLARIOUS: In those days, what games did you play?

SYLVIA: I now call it “LOOKIE LOOKIE.” We’d lie on the grass, point and say “Look at that … stuff.” Nothing had names. Frankly, it was very popular because what else did we have to do? In fact we loved it so much, that two cousins in our village Marcus Burnettsky and Alexander Trebrebeksy, thought: “Why don’t we make a regular contest to name “stuff.” Isaac Funk won. It was Isaac who, for example, named a cloud a cloud, a dog a dog … and “oy vey.” He coined that. The whole village turned out after Shabbos to play. The two got so rich, each had a cave with a roof that didn’t leak.

JEWLARIOUS: Sylvia, tell us. How many times have you been married?

JEWLARIOUS: A half? How can you marry a half?

SYLVIA: If you must know, it was Sammie, my 2nd. It turned out we’d already been married before so we got a get. To get a get I had to chisel my reasons then shlep it to the most important rabbi in the desert. The funny thing? Of all my husbands, Sammie could’ve been a winner. I never before met a man who could recite Torah, make the best brisket, and weave a curtain from twigs. Meanwhile, enough is enough already. You think it’s easy sitting in Sun at my age? I could get liver spots.

JEWLARIOUS: I have so many more questions, I’ll shorten.

SYLVIA: Wait! For asking questions they pay you? Three thousand years Jews have been asking questions, and never once expected even a shekel. You’ve got some racket buddy boy. And how do I even know you’re writing what I say? Just today I read in the Gaza Gazette how the Jews made the locusts attack Damascus 3300 years ago! EGYPT. IT WAS EGYPT! Schmendricks! A nahr bleibt a nahr ( A fool remains a fool)! And now I’ll make a little tzimmis, and lie down. We’ll catch up tomorrow – if you’re still here.

My Mother's Mouth
G-d Time
Shavuot is The Holiday of Cheesecake and Blintzes
What Does Kosher Mean Literally?
Comments
MOST POPULAR IN Funny Stuff
Our privacy policy