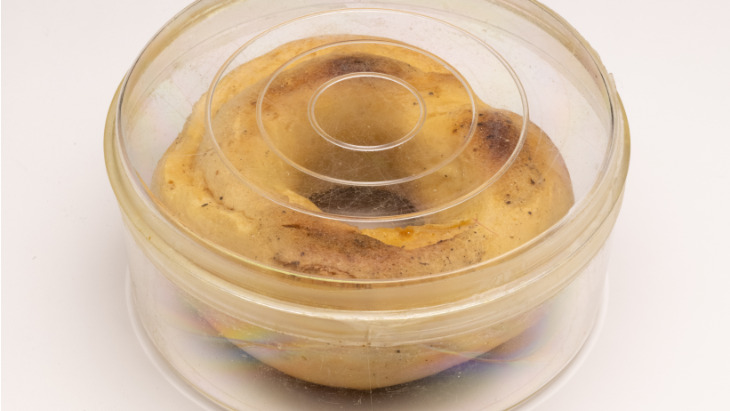 The keepsake bagel is hard as a rock and surprisingly not moldy. But hold the cream cheese!

ATLANTA – A bagel that survived the Spanish-American War of 1898 holds a place of honor in a new exhibit at the William Breman Jewish Heritage Museum, “History with Chutzpah: Remarkable Stories of the Southern Jewish Adventure, 1733-Present.”

It all began when Samuel Greenblatt of Knoxville, Tenn., had the chutzpah to lie about his age and enlist in the 4th Tennessee Volunteer Infantry at 16. He headed for Cuba on Dec. 1, 1898, to fight in what would be a short-lived war. Before Sam left home, his Jewish mama, Beile, tucked some homemade bagels into his knapsack.

Upon his safe return, Sam discovered one of them still buried in the bottom of his knapsack.

“Petrified by time, it has been handed down through several generations of his family,” says Sandy Berman, co-curator of the exhibit, who lobbied long and hard for the bagel to come to the Breman. 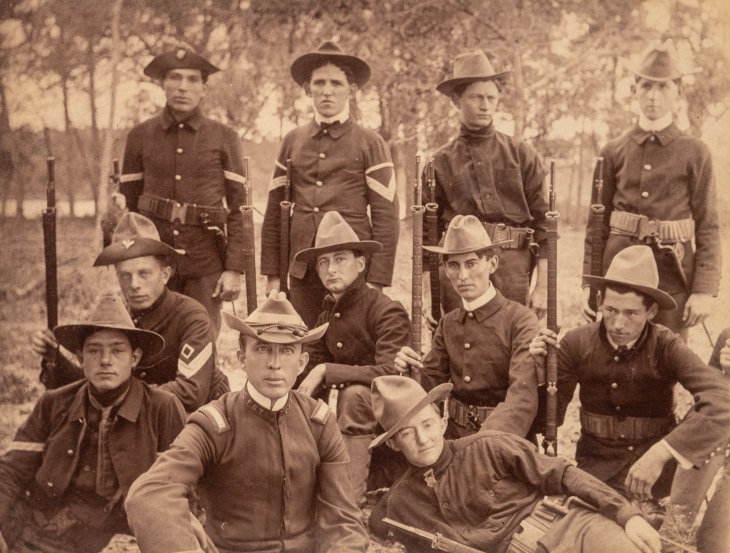 Sam Greenblatt (top, left) with his unit during the Spanish-American War, c.1899.

“I was first introduced to the bagel story many, many years ago,” she relates. “I’ve been after that bagel for years, ever since I met Sam’s granddaughter, Beth. It’s such a great story. When we did this exhibition, I thought I’d give it one last try.”

Historic Bagel Emerges from the Dark

For a long time the family kept the historic bagel in a safety deposit box. Now on loan to the Breman for the exhibit’s run, the unassuming doughnut-shaped roll sits behind glass, next to a stainless-steel collapsible drinking cup and holder that Sam used during the war.

The keepsake bagel is hard as a rock and surprisingly not moldy after 125 years, reports Berman.

The military fumigated soldiers’ belongings to prevent the spread of pests into the US. Perhaps the chemicals preserved the bagel.

Sam’s granddaughter Beth Greenblatt Sugarman has her theory about the secret to the bagel’s long life. Many Spanish troops died of yellow fever, a virus spread by mosquitoes, while fighting in Cuba. Before American soldiers returned home, the military fumigated their belongings to prevent the spread of pests into the United States. Perhaps the chemicals preserved the bagel.

All in the Family

For unknown reasons, the Greenblatts saved the bagel. As Sugarman says, “It went from my grandfather to my father. My father kept it in a safety deposit box. I keep the bagel in a tacky plastic container that my grandmother put it in and taped it.

“The color is perfect. It’s very dainty. It never molded. It was just like Beile made it.”

Sam’s parents immigrated to America from Lithuania. Because he spoke Yiddish, he was able to communicate with Jews in Cuba – and gather information for his infantry unit.

After the war, he and one of his brothers moved to Atlanta and in 1915 opened American Laundry and Dry Cleaning, a successful enterprise that used horse-drawn wagons for pick-up and delivery before converting to motor vehicles.

Sam had two children: Beth’s father, Sidney, and her aunt, Evelyn Greenblatt Howren. Evelyn is also featured in the Breman’s “History with Chutzpah” exhibit. An adventurer like her father, she took her first flying lesson in college and pursued this passion against her parents’ wishes, according to the exhibit brochure.

Managing to pay for her own lessons, she earned a private pilot’s license in 1941 and joined the Civil Air Patrol’s first all-women’s squadron.

In 1942 Evelyn entered the first class of Women’s Air Service Pilots, a civilian organization whose members were United States federal civil service employees. She logged some 3,000 hours of flight time, thereby freeing male pilots for combat during World War II by testing and ferrying aircraft and training other pilots. In 2009 Congress awarded her and other female pilots the Congressional Gold Medal for their contributions.

Evidence for the Exodus

History of the Jews of Yemen
The Promise Of The Land
Which Chat Are You On?: Parshas Behar/Lag Ba’Omer
Do You Like Slow-Cooked Food? Thank the Jews
Comments
MOST POPULAR IN History
Our privacy policy