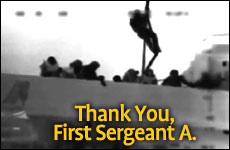 A letter to Israel's Navy Seals who bear Jewish history’s burden on their shoulders.

You’ve become famous, my brother. I know you didn’t want to. You prefer the dark waters of the night. Yet suddenly we can see you on every self-respecting news channel – CNN, BBC, NBC.

There you are, quickly gliding down to the deck of the vessel. The audience at home watches with concern. Not all of us get the chance to jump off a helicopter in the middle of the night straight into an ocean of hatred and the knives held by bloodthirsty “peace activists.”

I know that at such moments, there is only one thing that truly scares you: Your mother finding out who you hang out with at night. Perhaps this is why your face is covered. Nonetheless, you show no hesitation and glide down. I think you may be doing it not only because your friends need you on that deck, or because of the heavy weight of the equipment you’re carrying. You may dismiss my words with a smile, but I believe another force pulled you down.

It’s a rather heavy burden, First Sergeant A. The burden of the Jewish people. It sounds bombastic, right? “History” and “ideals” are bad words in the post-Israeli discourse. Even to me it sounds a little schmaltzy. Our precious elites, which at this time engage in constant self-flagellation, managed to entrench within us the weakness of spirit and a sense of cynicism.

However, this burden exists. Perhaps it managed to find its way to your shoulders back when you were born. You are a citizen of the Jewish State, First Sergeant A., and your medical profile makes you fit to be a combat soldier. Hence, you have been destined to glide down from helicopters at late hours of night and take the spiting of the whole enlightened world. This world also expects you not to respond, even when someone fires at you.

We see you every day at the bus stop, First Sergeant A. We live not too far from your base and you return from home at the same time we head to kindergarten. You should know, A., that my son watches you with admiration from the back seat. He is excited to see the wings on your shirt and rules that you must be “the strongest soldier in the world.”

I smile when he says that, but then he adds: “Dad, I too will be like him when I grow up.” At night, when he sleeps peacefully thanks to you, I look at him and get frightened a little -- because this burden sneaks into his bed right before my eyes and holds on to him. And he’s just five years old.

Yes, all of us around here carry this terrible “genetic disease.” My grandfather brought it with him from the train station in Munich in 1939, and it was passed on to his great grandson, who now looks at you through the window. There’s not much we can do about it -- we’re Jewish.

We love you and are proud of you and your comrades.

I would love to be proven wrong. I wish I could remove this burden and run to the other end of the world. When I heard the blood-thirsty grunts across the globe the other day, I grabbed my atlas and started to flip through it, only to discover that we have no other place under the sun. The only place we’ve got is right behind your broad shoulders.

You must think that I’m getting carried away, but I’m not exaggerating. If you look around you closely enough, you too may realize that all that’s separating us from the knives, and bats, and barbed wire, and turbid soup -- is you. Just you.

So you should know, First Sergeant A., that we love you and are proud of you and your comrades. I hope for your success and pray for your health, even though we have no idea what you look like. But once in a while, don’t forget to watch out for yourself a little too. You may be used to operating in enemy territory, but being a Jewish mother is scary business as well.

This article originally appeared on ynetnews.com

It Hurts to Part from You
Vayelech 5783: Regret and Repent
Rabbi Sacks: Focus On the Important, Not the Urgent
Put Your Foot Down: Are Human Feet Poorly Designed?
Comments
MOST POPULAR IN Israel
Our privacy policy
Aish.com Is Looking for Great Writers