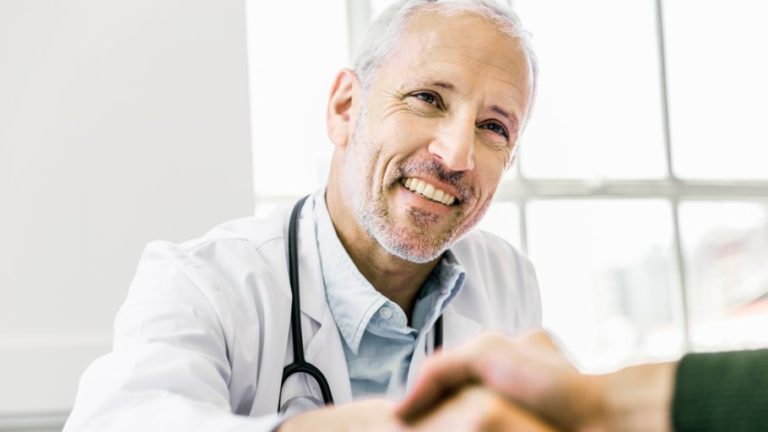 When I was a child my father had prostate cancer.

I remember it like it was yesterday. I was 11 years old thinking, If my parents aren’t going to tell me what was going on, I’ll find out myself.

With a quiet air, I slowly walked up to my teacher and asked, “Mrs. Marcus, do you know what a prostate is?”

She looked up at me quizzically, “Why do you ask, Rachel*?”

I responded, “I overheard my parents talking about it. I think my dad may be sick, but they won’t tell me anything.”

Mrs. Marcus was our phys-ed teacher and taught our class about health and nutrition. If there was anyone who had information on the topic, it was her.

The next day, she handed me a thick manila envelope and offered to answer any of my questions. During recess I searched for a secluded spot and took a breath before opening up the envelope.

I scoured the information she had given me and tried to piece together what it was that my father was diagnosed with. I later learned it was the big C – cancer.

All the events a few weeks prior started to fit together like some puzzle that was missing the final few pieces.

We had just finished cleaning up from dinner when we heard a knock at the door. I opened it and saw my father’s best friend. He seemed a little tired and disheveled, unlike his usual put together self. He walked into the entryway with my parents and they went straight into the dining room to talk. They seemed serious, but nothing looked too unusual to me. I scampered downstairs and didn’t think much of it.

Later, I realized it was in fact something big.

The next few weeks I kept hearing whisperings from my parents, and conversations with lowered voices and in undertones, and I knew something wasn’t right. Everything was very hush-hush.

My father had gone for a yearly check-up to the urologist. His best friend was also a urologist and sent him to someone in his practice for a routine visit. Results came back and everything looked great. The doctor was pleased and sent my father off. My father showed the results to his best friend afterwards. He looked at the reports and saw that some levels were slightly elevated, yet still within normal range.

He called my father and said, “I don’t think it’s a big deal, but if you want to, let’s check again just to be safe. These levels aren’t concerning, but you know... Why not?”

That “why not” moment enabled my father to live for another 22 years and counting.

It turned out my father did have prostate cancer. Prostate cancer is rarely found early on, therefore the survival rate is very low. Usually, upon discovery, it is already too late.

In addition to traditional medicine, my parents tried to incorporate every type of alternative healing they could get their hands on. They consumed a raw food diet for months, drank fresh carrot juice by the gallons, and even watched videos that promoted health visualization and deep breathing techniques. They were willing to tackle it from every angle and did everything in their power to help my father be his healthiest self.

Ultimately, they chose to operate. The operation proved successful and my father has been healthy ever since.

Just weeks after they removed the cancer, my father was out on the slopes, skiing all day long. He was 55 years old and never felt more energized in his life.

I shudder to think what would have occurred if the borderline results had just been ignored.

My parents wanted to protect me from the burden of this heavy information. But with time, I found out. As a child, realizing my father had cancer was challenging and has shaped the way I view health and caring for my body today.

I thank my father’s doctors with all my heart. Most importantly, though, I thank God, the ultimate doctor.

Ultimately, God is the lender of life and we have no real control over life or death scenarios. All we can do is live life to its fullest, appreciating every moment given to us, and thanking God for all the good in our lives.

Thank you to the doctors who saved my father’s life. Thank you to every doctor who saves lives, through diagnosis, surgery or preventatively by helping to keep people healthy.

Not every story has a happy ending, but every doctor deserves a thank you. They are God’s dedicated messengers.

To Not Walk Alone