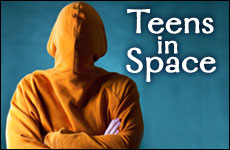 A teenager is a formerly sweet and obedient child who turns into an extra-terrestrial, overnight.

That’s right parents! This is about teenagers. Before you recoil in horror and utter some very not nice words, wait, stash those words. It doesn't have to be like that. First take some time to understand your teenager. Then you can use those words if you still need to.

Adolescence is a viral disease that has no effective treatment.

Unlike other childhood diseases such as chickenpox or German measles which cause great discomfort to the child, adolescence is a disease that causes discomfort to everyone but the child. Adolescence is viral and has no effective treatment. There is no immunization. It will go away by itself after five years or so depending on the child, so don’t bother going to the doctor. Temporary relief can be obtained by sending your teenager on a skiing trip to Colorado, as long as you don’t live in the Colorado area. Sending the child on a skiing trip to Switzerland can provide extra-strength relief as long as you live in the Colorado area.

How does a parent survive his or her child’s teenage years, sanity intact? Actually, there are some very practical techniques available to handle this situation. As soon as the slightest indication of teenage symptoms rears its head, such as a dramatic increase in the grunt per minute ratio or if the child starts wearing a backwards baseball cap with headphones 24 hours a day or if he looks like he just woke up, all day, don’t wake the kid up the next morning, or the next, or the next, or the next… It is entirely possible the child will sleep right through to his eighteenth birthday.

“WO! I didn’t have a beard when I went to sleep last night. WO! WO! Who just said that? Last night I had a squeaky voice.”

If for some reason the child has trouble sleeping for more than a year or two, the parent should sleep through the child’s 18th birthday. If you have a few teenagers, you can wake up quite rested. If neither of these strategies works for you, this might be the time to use those words you've been saving.

According to "Teenage Father's Almanac," a teenager is a formerly sweet and obedient child who thought that his or her parents were the greatest, who turns into an extra terrestrial being, overnight. For those who do not have teenagers yet, I recommend watching the old flick, “Invasion of the Body Snatchers” for a sneak preview.

According to "Teenager's Almanac," a parent is an embarrassment.

The typical teenager would prefer not to be spoken to by his or her parents, unless it is:

Mom: “Here are the car keys dear, and don't worry about curfew. Your favorite dinner will be warming in the oven whenever you return. Why don’t you drink some milk before you go? Don’t worry about a glass; drinking from the container is just fine.”

Mom: “And please take my credit card just in case you find some of those distasteful shirts on sale.”

Mom: “By the way, we haven’t seen your friend Igor in a while, you know, the one who drives a motorcycle and could use a haircut or two. Why don’t you invite him over for dinner again? He seemed so sweet. He was so considerate when he didn’t use his fork or spoon to eat with so that we wouldn’t have to wash them.”

Try it out on your teenager. You will have at least one moment of stunned silence before your child, thirst quenched, takes the plastic and runs.

If it is impossible to avoid conversation completely, never ever repeat yourself when talking to a teenager. Ever!

“You used the letter 'A' today already Dad. You don't have to repeat yourself a million times. I heard you the first time.”

For a child, the teen years are like the reentry of a spacecraft into the pull of earth’s gravity from the pressure-less, weightlessness of the childhood atmosphere. The closer the child approaches real, adult, earth life, the more he or she is brutally pulled in all directions, until finally after a five year struggle, an adult ship touches down gently on earth. This is why most teenage faces are marred by a scowl. They can’t help it; it's the "T-forces." It also explains why they are always “spaced out.”

“You were a teenager yourself once,” my mother informed me.

Personally speaking, I have the greatest respect for individuals of the teenage persuasion. “You were a teenager yourself once,” my mother informed me a while back, when she felt I was mature enough to face my past. My children did not believe her. They thought I was always 200-years-old. Mrs. X (after serving as my mother during my teenage years she prefers to remain anonymous), told me that I was quite talented back then. I was capable of shouting, "I'M UP, I'M GETTING DRESSED," while sound asleep, my head hermetically sealed beneath five pillows and a blanket. It's amazing how I got any oxygen at all under there, but then again, there is no oxygen in outer space. That could explain quite a few things.

Most teenagers are like walking, talking googles. It is quite impressive. They know absolutely everything there is to know about every topic on earth and beyond. That comes in very handy for us parents who know absolutely nothing about anything. The fact that parents seem to know more once their children reach their twenties, is due to the selfless sacrifice on the part of the children to educate their parents during their younger years.

Teenagers are capable of entering a locked house in minutes at any hour of the night or day, without setting off the state-of-the art, burglar alarm system which consists of the father of the house sleeping standing up against the front door. And, although a teenage boy will eat a ton of nutrition-less, fattening, chemically enriched junk food daily, he will outgrow his father in height, breadth and muscles by the time he is sixteen. He will do this only to prove to his parents that “eating only junk food really doesn’t kill you.” At the same time, Dad will eat one donut and instantly gain a pound and an inch of flab.

Many employers now make special allowances for employees who have teenagers living at home. “I didn’t realize that your kids were that old already. How many do you have? Eight? Wow! And three of them teenagers? I’m so sorry. Take as much time as you need. Come early; work late. Don’t worry if you finish all your work, we’ll find more. Do as much overtime as you want. Work on Sundays. I’ll pay you double-time. Bring a cot to the office if you want. Bring one for your wife. I’ll pay her too.”

Disclaimer: Fortunately, none of the special teenage characteristics mentioned in this study apply to my own children who are perfect in every way. All of the intensive, in-depth research, was based solely on hearsay about other nameless teenagers, none of whom my children even know.

By the way, I hear Colorado is pretty nice this time of year.

Passover Aftermath
Were Adam and Eve Jewish?
How I Learned to Love the Multiverse
10 Big Jewish Inventions
Comments