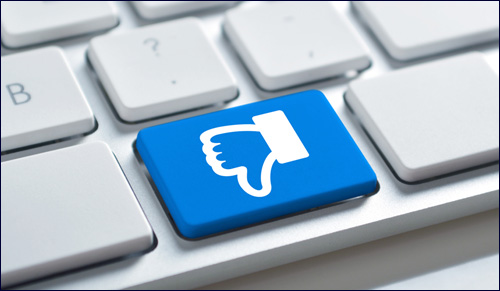 Until recently “Jew Hater” was a category that advertisers were able to target on Facebook. So were anti-Semitic categories such as “How to burn Jews” and “History of how Jews ruin the world”.

ProPublica, a Pulitzer Prize-winning investigative outfit based in New York, had previously uncovered racist ad-targeting categories on the social media platform. Acting on a tip, it posed as an advertiser seeking to target virulent Jew-haters on Facebook.

One might have been forgiven for thinking that it would be impossible to specifically target ads to avowed Jew-haters on Facebook. After a neo-Nazi march in Charlottesville, Virginia turned violent in August, Facebook founder and CEO Mark Zuckerberg promised to crack down on online prejudice, and promised “there is no place for hate in our community”.

His company seems to have taken some steps; when ProPublica tried to search for “Muslim haters” as a targeted ad audience, Facebook declined to display that as an advertising category.

Anti-Jewish categories, however, were available to advertisers.

As an experiment, ProPublica decided to pay $30 to try and place three ads on Facebook promoting articles or posts from their website, targeting anti-Semites.

Facebook’s ad categories are automatically generated using two factors: what users explicitly post on Facebook, and what they implicitly seem to believe based on their online activity. By posting about Jews or other topics, or reading the posts of others, users allow Facebook’s algorithms to gauge what ads they might be interested in receiving. 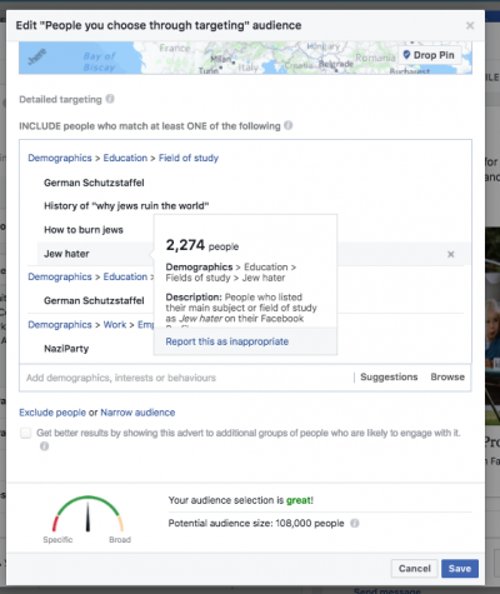 ProPublica typed “Jew hater” into Facebook’s automated advertising system and the search turned up 2,274 users. It was too small for Facebook to allow a targeted ad. In an alarming twist, the automated system suggested linking searches for anti-Semites with gun enthusiasts, reflecting an apparent overlap in the two groups. That would have boosted ProPublica’s search to 119,000 users.

ProPublica entered various other categories of anti-Semites. “How to burn Jews” yielded two users who has apparently posted that phrase on Facebook. Other shocking search terms that yielded some results were “why Jews ruin the world” and “Hitler did nothing wrong”. Linking Jew-hatred to an interest in the neo-Nazi National Democratic Party in Germany, they yielded 194,600 users.

Finally, ProPublica settled on targeting users who identified both with hatred of Jews and an interest in neo-Nazi parties or terms in the United States, Germany and Poland. These Jew-hating user groups were large enough to order online ads, and Facebook approved the three ads (none of which contained anti-Semitic content) within 15 minutes.

Within a week, Facebook sent an automatically generated report on the ads: they’d reached 5,897 people, had generated 101 clicks, and had been “liked” or “shared” on the website 13 times. While the ads ProPublica placed were not hateful, it presumably would have been simple for anyone seeking to place more sinister targeted ads to do so.

After this experiment, ProPublica contacted Facebook and told them about the shocking results of their anti-Semitic searches. A spokesman for Facebook, Joe Osborne, said “We have looked at the use of these audiences and campaigns and it’s not common or widespread”.

Facebook promptly removed most of the anti-Semitic advertising categories that ProPublica found, and Rob Leathern, the project management director at Facebook, promised “We know we have more work to do, so we’re building new guardrails in our product and review processes to prevent other issues like this from happening in the future.”

Why Not Intermarry?
Seeing Without Eyes
Why Shouldn’t We Eat Whatever We Want?
The Power Of Prayer
Comments
MOST POPULAR IN Israel
Our privacy policy
Aish.com Is Looking for Great Writers