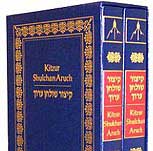 Yahrtzeit of Rabbi Shlomo Ganzfried (1804-1886), author of the popular Kitzur Shulchan Aruch (Concise Code of Jewish Law). He was born in Carpathia, and later became a rabbi in Ungvar, Hungary. Ganzfried wrote the Concise Code to provide an easy guide to practical Jewish law, for those Jews who were not in a position to study and comprehend Rabbi Yosef Karo's original Code and its many commentaries. The Concise Code became immensely popular, and it is estimated that over two million copies have been printed. (Other sources list his yahrtzeit as Tammuz 28.)

King Sennacherib and the Siege of Lachish
Faith: A Lot Deeper Than You Think
The Meaning of Some Common Jewish Last Names
The Pletzel of Paris and The Bread That Shares Its Name
Three Small and Easy Changes to Add Positivity in Your Home
Breaking Barriers and Baking Babka: How One Jewish Mom Became a YouTube Sensation
Scientific Curiosity and the Divine Encounter
Mind Over Milkshakes
Love the Convert
Comments
MOST POPULAR IN Day in Jewish History
Our privacy policy
Aish.com Is Looking for Great Writers